India: All Is Fair In Trademark Wars

The #BlackLivesMatter movement has gained traction around the world and has encouraged many corporate entities, including multinational companies (MNCs), to reassess their businesses and marketing policies for signs of discrimination, following the calls against racial inequality after the death of George Floyd in the United States. In India, too, Hindustan Unilever Limited (HUL) announced that they would stop using the word "fair" in its "fair and lovely" skin product line. Following suit, Johnson and Johnson also announced that they will discontinue two lines of skin care products from its range that includes the word "fairness" on its labels. L'Oréal, the world's largest beauty and cosmetic company, also announced that it will stop using words "whitening" and "fair" in describing its products.

The HUL rebranding announcement invited a lot of criticism on grounds that a change of name without actually discontinuing the product was merely a marketing stunt and does not show genuine concern. Critics are of the opinion that the brand could have delivered a stronger message by discontinuing the product line entirely, or by coming up with another product. However, fairness enhancement creams generate major revenue for companies in this space, who cannot afford to discontinue these products completely. Given the nature of the Indian market, the best solution is to undertake a rebranding exercise, without changing the description of the products.

This is not the first time that HUL is trying to rebrand its product. In the past, the company has substituted the word "fairness" with "even tone", "skin clarity" and "radiance". This time, the company adopted the term "glow", which is regarded as a synonym for fairness.

However, that did not sit well with HUL's competitor "Emami Ltd.". The name change was strongly condemned by Emami Ltd., who threatened strong legal action against HUL as it had reportedly launched the brand 'Emami Glow & Handsome' a week earlier by making necessary filings. Emami  is already well-known in the market for its brand 'Fair and Handsome' for its men's range.

Legal feuds between the two competitors is not new. This time, both companies ended up filing applications for the mark "Glow & Handsome" on 25 June 2020, on a proposed-to-be-used basis. 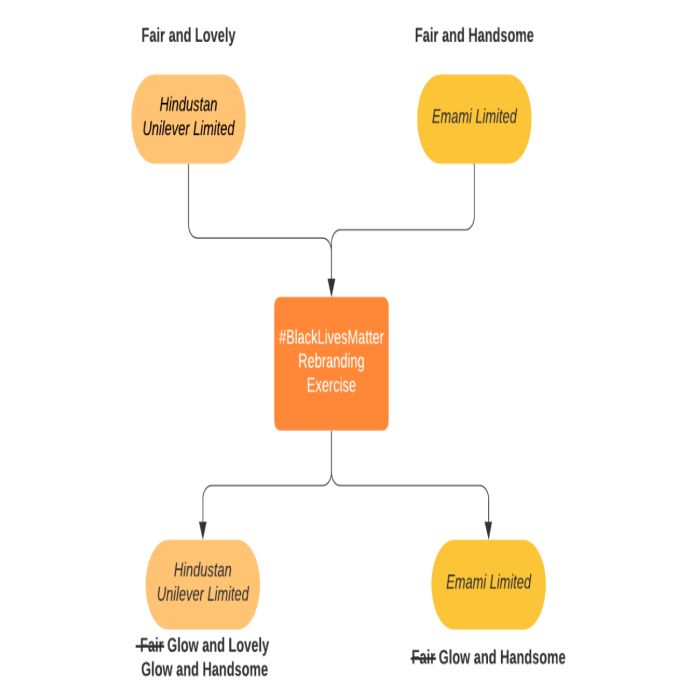 On 6 July 2020, HUL filed an application for an interim injunction in the Bombay High Court against 'groundless threats' by Emami in respect of its trademark 'Glow & Handsome'. In its petition, HUL claimed that it had applied for registration of the 'Glow & Lovely' and 'Glow & Handsome' trademarks way back in September 2018, but they were refused on 26 July 2019 on absolute grounds under Section 9 of the Trade Marks Act, 1999 ("the Act"). Accordingly, HUL reapplied for these names on 17 June and 25 June 2020, respectively.

The Court observed that "[p]rima facie it does appear that having filed its trademark application in September 2018 and subsequently on 25th June 2020 for the mark 'GLOW & HANDSOME', the Plaintiff (HUL) is the prior adopter of the said mark". The Court also observed that the statements made by Emami do amount to a threat, however, as to whether they are unlawful or groundless would be decided after hearing both sides. The Court directed Emami to give HUL seven days' prior written notice before initiating legal proceedings against it. The matter is now listed for 27 July 2020 for further hearing.

In India, the ownership of a trademark is determined on a first-to-use basis. The principle of "Priority in adoption and use prevails over priority in registration" is usually applied in these situations.

An entity can establish ownership over a mark by using the mark in the course of trade and by substantiating prior use of the mark. This prior use right is found in Section 34 of the Act. This provision mandates that the proprietor of a mark cannot hinder the use of an identical trade mark by a person who has been continuously using the mark from a prior date. Under common law remedy also, the tort of passing off may be initiated by the owner (or prior user) of a trade mark against the person/entity who, in the course of trade, misrepresents about its goods or services in a manner which makes the purchasers believe that they are emanating from the source of original owner.

This "first user" rule is a ground-breaking part of the Act. The proprietor of a mark, by using the mark in relation to their goods, and thus causing it to be associated with those goods, can acquire a quasi-proprietary right to the exclusive use of the mark. The key is that the date of first use must pre-date the date of registration of the mark by the other person. The important requirements under this provision are as follows:

The one major question that arises from this controversy is whether mere filing of earlier applications would be sufficient to claim prior use of the mark? Can a prior user right be claimed when the mark in question has been refused to the user claiming such rights? The detailed grounds of refusal in the decisions issued in HUL's refused applications show that the marks were refused on the ground of lack of distinctiveness, which have been challenged by the HUL at the Trademarks Registry.

The Court's handling of this high-profile, high-stakes litigation will be watched keenly by all, including prospective applicants, who will be looking for guidance on what needs to be demonstrated in order to claim prior rights in case of trademark infringement.

ARTICLE TAGS
India Intellectual Property Trademark
POPULAR ARTICLES ON: Intellectual Property from India
Patent Law in India
Anand & Anand
The Patents Act 1970, along with the Patents Rules 1972, came into force on 20th April 1972, replacing the Indian Patents and Designs Act 1911. The Patents Act was largely based on the recommendations of the Ayyangar Committee Report headed by Justice N. Rajagopala Ayyangar. One of the recommendations was the allowance of only process patents with regard to inventions relating to drugs, medicines, food and chemicals.
Compulsory Licensing In India
Khurana and Khurana
WIPO defines patent as an exclusive right granted for an invention, which is a product or a process that provides, in general, a new way of doing something, or offers a new technical solution to a problem
All You Need To Know About "Well-Known Trademarks"
Khurana and Khurana
With coming up of the new Trade Mark Rules 2017, a new procedure has been created that allows the Registrar to proclaim a particular trademark as "well known".
Concept Of Fair Use And Fair Dealing In Copyright
Singh & Associates
Fair use supports "socially laudable purposes," typically, if not exclusively, involving the use of the copyrighted work by a second author
Patents Law In India - Everything You Must Know
Vaish Associates Advocates
The presentPatents Act, 1970 came into force in the year 1972, amending and consolidating the existing law relating to Patents in India
A Study On: Novartis AG v. Union Of India
Khurana and Khurana
Intellectual property is an intangible form of property while a ‘Patent' is a subset of intellectual property.
FREE News Alerts
Sign Up for our free News Alerts - All the latest articles on your chosen topics condensed into a free bi-weekly email.
Register For News Alerts
Article Tags
India Intellectual Property Trademark
Related Articles
Section 39 Of The Patents Act, 1970 Singh & Associates
Penalties And Reliefs Under The Indian Patents Act, 2000 Singh & Associates
Emerging Trends In Digital Copyright Law Khurana and Khurana
Copyright (Amendment) Rules, 2021: Key Takeaways Singh & Associates
Domain Name Parking - Sufficient To Show Use Of A Trade Mark In India? Sujata Chaudhri IP Attorneys
Mondaq Webinars
Future Series: The Journey to Net-Zero: Climate Change, Carbon Credits and Emissions Trading
Bennett Jones LLP
Webinar Calgary Canada
Notice and Claims Administration Best Practices: U.S foundations, Global Implications
Angeion Group
Webinar Philadelphia, PA United States
More Webinars
Comparative Guides
Alternative Investment Funds
Artificial Intelligence
Blockchain
Cartels
Corporate Tax
More Guides
Mondaq Advice Centres
India
Trademarks
India
Arbitration, Litigation and Conciliation
India
Insolvency
Global
Trademarks in SAARC Countries
Global
Investment Immigration
More MACs
Upcoming Events
Mondaq Social Media