A geographical indication is a sign which is used on products that have a specific geographical origin and possess qualities or a reputation that are due to that origin. Geographical Indication is primarily granted to agricultural, natural, manufactured, handicraft originating from a definite geographical territory.

Article 22 of the TRIPS Agreements defines Geographical Indication as "indications which identify a good as originating in the territory of a Member, or a region or locality in that territory, where a given quality, reputation or other characteristic of the good is essentially attributable to its geographical origin".1

Consequently, upon India joining as a member state of the TRIPS Agreement sui-geneis legislation for the protection of geographical indication was enacted in 1999. The object of the Geographical Indications of Goods (Registration and Protection) Act, 1999, is three fold,

A registered Geographical Indications prohibit a third party to use such Geographical indication by any means in the designations or presentations of goods that indicate that such goods originates in a geographical area.

Since the first GI in India was registered in 2004, 301 GI's have been granted Registration as on October 25, 2017 by the GI Registry, India. The GI Registry has received a total number of 610 GI Applications as on January 11, 2018. Out of the Registered GIs 64 per cent are related to handicrafts, 26 per cent are for agricultural products, 6.18 percent are for manufactured products and the remaining are foodstuff and textile products. 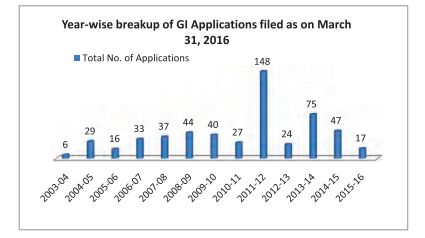 Source: The Office of the Controller General of Patents, Designs, Trademarks, and Geographical Indications Annual Report 2015-163

. Pochampally Ikat is visually identified by the çhowkra design which is a diamond with square, or its derivatives, having different edges.

Pochampally Ikat originates from the geographical region of Nagolda and parts of Warangal districts in the state of Telengana. It is made of natural materials such as cotton or silk or a combination of both, having designs that are evocative of the diffused diamond or chowka design. The process of making involves tying and dyeing the threads in a visualized design prior to the weaving of the fabric. This work has good demand both in the domestic and international market due to its aesthetic look and primitive simplicity. After registration of Pochampally Ikat(word) in the year 200, Pochampally artisans got attention of the Media. Further there was increase in the market of Pochampally Sarees.6

The 'King of fruits' i.e. Banaganapalle mangoes has received GI tag in the year 2017. The logo

decided by the Government features a bright yellow fruit around which the tagline says "Banganappalle Mangoes of Andhra Pradesh," with images of a man and a woman appearing to be farmers. Anyone from now on to sell or produce these must first apply to become authorized users and would require a no-objection certificate (NOC) from Horticulture Development Agency, Represented by Commissioner of Horticulture, Government of Andhra Pradesh.

The fruit is also known by a variety of monikers like Beneshan, Baneshan, Benishan, Chappatai, Safeda, Banaganapalli, Banginapalli, Banaganapalle, etc. The highlight of the fruit is that it can preserve its quality under cold storage up till three months. The documents submitted to the Registry stated 'The prominent characteristic of Banganapalle mangoes is that their skin has very light spots, stone is oblong in shape and has very thin seed with sparse and soft fiber all over'.

The Government also stated the primary center of origin to be Kurnool District comprising Banaganapalle, Paanyam and Nandyal mandals and Khammam, Mahabubnagar, Rangareddy, Medak, Adilabad districts in Telangana as secondary centers of origin. According to an affidavit furnished in 2011, Rani Kumudini, the then Andhra Pradesh Commissioner of Horticulture, stated that nearly 7,68,250 families were involved in the production of Banaganapalle mangoes. An estimated 24.35 lakh metric tonnes of mangoes were grown every year in Andhra Pradesh and about 5,500 tonnes of Banganappalle mangoes were being exported annually to countries like the U.S., U.K., Japan and the Gulf nations.7

The Government of West Bengal, was granted Geographical Indication (GI) Tag for

vide registration No. 531. The rice is a native, aromatic, non-basmati premium variety rice from West Bengal. The cultivation of it is as old as 300 years in the area. It is short white grains, sticky rice having a sweet buttery flavor and pleasant aroma. It derives its name from principal ingredient used in preparation of offerings to Govindajiu, the family deity of Setts of Kolkata.

The application for the GI tag was filed by the State Government of West Bengal in August, 2015. The Gobindobhog Rice is the specialty of Burdwan district of West Bengal. Because of this variety of rice, the region is also known as the rice bowl of West Bengal. The rice is predominantly cultivated in East Burdwan district - in the southern basin of the Damodar River in the Raina 1, Raina 2 and Khandaghosh blocks. It was cultivated in an area of 35 hectares last year. Of this, 20 hectares were spread over of Raina 1 and Raina 2 blocks. The special features of this variety of rice is that it is cultivated late, after the rainy season, and therefore it is affected very little by it and is less prone to pests. The price and productivity of the rice is high compared to other varieties of rice.

The state government is celebrating the GI tag as they are now assured that different variety of rice from the same region cannot be branded as 'Gobindobhog Rice'. Also, the marketability of the Gobindobhog Rice in the domestic and international market would be strengthened, resulting in better profits for the state and more importantly for the stakeholders in general.8

Turmeric has been used in Asia for thousands of years and is a major part of Ayurveda, Unani and traditional Chinese medicine. On January 11, 2018, Kandamal Apex Spices Association (KASAM) filed application for Kandhamal Haldi for GI registration vide application no. 610 with the GI Registry, Chennai.

Kandhamal Haldi is a member of the Curcuma botanical group, which is a part of the ginger family whose botanical name is Curcuma Longa. Kandhamal is a district in Odisha which is centrally located and whose Geographical area is hilly and covered with forest. Annually about 14900 het of turmeric is grown in the district with a production of about 34270 MT. Khandhamal stands second in the district wise coverage of turmeric in India next to Karimnagar district of Andhra Pradesh. KASAM in its application has stated that turmeric is the main cash crop of the poor Tribal Farmer of this district. Further Kandhamal turmeric is organically produced without use of any chemical fertilizer and pesticide.9

3. Annual Report(2015-16), The Office of the Contreoller General of Patents, Designs, Trademarks, and Geographical Indications , available at: http://www.ipindia.nic.in/writereaddata/Portal/IPOAnnualReport/1_71_1_Annual_Report_2015-16_English__2_.pdf

4. Registered Geographical Indications as on October 25, 2017, available at: http://www.ipindia.nic.in/writereaddata/Portal/Images/pdf/Registered_GI.pdf

5. Registered Geographical Indications as on October 25, 2017, available at: http://www.ipindia.nic.in/writereaddata/Portal/Images/pdf/Registered_GI.pdf