India: Trademarks Law In India – Everything You Must Know

by
Vaish Associates Advocates
Your LinkedIn Connections
with the authors
To print this article, all you need is to be registered or login on Mondaq.com.

With the globalization of trade, brand names, trade names, marks, etc. have attained an immense value that require uniform minimum standards of protection and efficient procedures for enforcement as were recognised under the TRIPS. In view of the same, extensive review and consequential amendment of the old Indian Trade and Merchandise Marks Act, 1958 was carried out and the new Trade Marks Act, 1999 was enacted. The said Act of 1999, with subsequent amendments, conforms to the TRIPS and is in accordance with the international systems and practices.

The Trade Marks Act provides, inter alia, for registration of service marks, filing of multiclass applications, increasing the term of registration of a trademark to ten years as well as recognition of the concept of well-known marks, etc. The Indian judiciary has been proactive in the protection of trademarks, and it has extended the protection under the trademarks law to Domain Names as demonstrated in landmark cases of Tata Sons Ltd. v. Manu Kosuri & Ors, [90 (2001) DLT 659] and Yahoo Inc. v. Akash Arora [1999 PTC 201].

India recognises the concept of the "Well-known Trademark" and the "Principle of Trans Border Reputation". A well-known Trademark in relation to any goods or services means a mark that has become so to the substantial segment of the public, which uses such goods or receives such services such that the use of such a mark in relation to other goods and services is likely to be taken as indicating a connection between the two marks.

Trans Border Reputation concept was recognised and discussed by the Apex Indian Court in the landmark case of N. R. Dongre v. Whirlpool (1996) 5SCC 714. The Trademark "WHIRLPOOL" was held to have acquired reputation and goodwill in India. The Mark "WHIRLPOOL" was also held to have become associated in the minds of the public with Whirlpool Corporation on account of circulation of the advertisements in the magazines despite no evidence of actual sale. Hence, the trademark WHIRLPOOL was held to have acquired trans-border reputation which enjoys protection in India, irrespective of its actual user or registration in India.

Procedure of Registration of Trademark in India 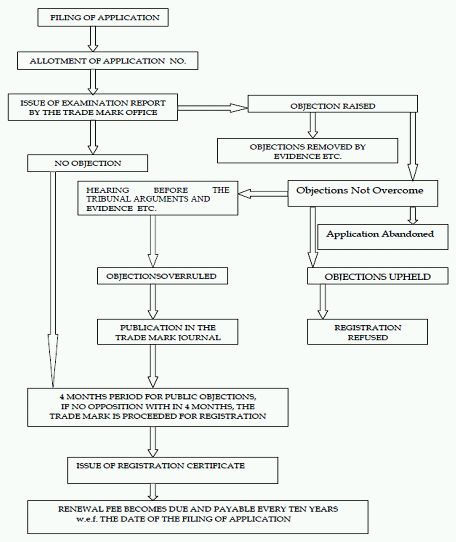 In order to fulfill the obligations of any treaty, convention or arrangement with a country or countries that are members of inter-governmental organizations, which accord to Indian citizens similar privileges as granted to their own citizens, the Central Government notifies such countries to be Convention Countries. In case of an application for registration of a trademark made in any of the Convention countries, a priority date can be claimed with regard to the application in India, provided that the application is made within six months of the application having been filed in the Convention country. The Government has notified and extended this privilege of priority to the members who have ratified the Paris Convention on Protection of Industrial Property.

After advertisement of a trademark in the Trade Marks Journal, (which is available online at the website of Office of Registrar of Trademarks) an opposition challenging the application for registration can be filed by any person within a period of 3 months (which may be extended by a period not exceeding 1 month).

Indian law contains embargo on the assignments of trademark, whether registered or unregistered, whereby multiple exclusive rights would be created in more than one person which would result in deception/confusion. However, the assignment with limitations imposed, such as goods to be sold in different markets, i.e., within India or for exports are valid. The Registrar is authorized to issue a certificate of validity of the proposed assignment on a statement of case by the proprietor of a registered trademark who proposes to assign the mark. The said certificate as to validity is conclusive unless vitiated by fraud.

Specific Questions relating to this article should be addressed directly to the author.

ARTICLE TAGS
India Intellectual Property Trademark
POPULAR ARTICLES ON: Intellectual Property from India
Assignment And Licensing Of Copyright
S&A Law Offices
Copyright is a protection given to the creators of certain types of works as an acknowledgment to their intellectual input
Delhi High Court Defines Criminal Liability Against Online Marketplaces In India
JSA
One of the most scariest and intimidating situations for any person and more so for employees is being charged in criminal prosecutions in their official capacities on behalf of company/firm...
Trade Marks And The Metaverse: Recent Trends In India
Sujata Chaudhri IP Attorneys
In the post covid era, the ‘Metaverse' has become one of the most hotly discussed technological advancements globally. More and more brands are choosing to launch their products and advertise...
Is Your Startup Investable?
Photon legal
An investable strategy focuses on the allocation of capital resources towards a business goal. It has been around for a while and is effective in mitigating risk and guiding capital...
A Study On: Novartis AG v. Union Of India
Khurana and Khurana
Intellectual property is an intangible form of property while a ‘Patent' is a subset of intellectual property.
[IP ASIA] Gems Bond Vs James Bond: Cadbury Wins In India
HFG Law & Intellectual Property
In a case that goes back as 2005, between Mondelez India Foods Pvt Ltd, better known as Cadbury, and Neeraj Food Products, the Delhi High Court has finally made its judgement, ruling in favor of the plaintiff.
FREE News Alerts
Sign Up for our free News Alerts - All the latest articles on your chosen topics condensed into a free bi-weekly email.
Register For News Alerts
Article Tags
India Intellectual Property Trademark
Related Articles
Scepticism Revolving Around ‘Pre-Litigation Mediation' In IP Matters Khurana and Khurana
Getting To Grant: Patent Prosecution In India Obhan & Associates
Un-Reasoned Order May Invoke Writ Jurisdiction Of Indian Court In A Patent Opposition L. S. Davar & Co.
Delhi High Court Reiterates The Liabilities Of Intermediaries S.S. Rana & Co. Advocates
Creation Of Intellectual Property Division And Allied Rules Khurana and Khurana
Mondaq Webinars
Employer Responsibilities and Employee Rights in Australia
People + Culture Strategies
Future Series: Managing the Risks of ESG Reporting and Compliance for In-House Counsel and Executives
Bennett Jones LLP
More Webinars
Comparative Guides
Alternative Investment Funds
Artificial Intelligence
Aviation Finance
Aviation Regulation
Blockchain
More Guides
Mondaq Advice Centres
India
Trademarks
India
Arbitration, Litigation and Conciliation
India
Insolvency
Global
Trademarks in SAARC Countries
More MACs
Curated Content
Fast Tracking Through The Patent Prosecution Highway In India
Obhan & Associates
Divisional Applications And Plurality Of Invention In India
Obhan & Associates
Do Scientific Publications Exempt Patent Applications From Anticipation?: The Indian Position
Obhan & Associates
Preparing For Invention Disclosure Meetings: A Guide For Inventors
Obhan & Associates
Patenting 3d Bioprinting In India
Obhan & Associates