Trademarks law envisages that due to their territorial nature different jurisdictions have the liberty of according protection based on their independent statutes. Jurisdictions traditionally favour one of two main approaches in considering the priority of a trademark owner: "first to file" and the "first to use".

Thus, whereas China, Japan, France, Germany and the rest of the European Union generally favour the rights of the first one to file a trademark, jurisdictions such as Australia, India, Singapore and the United States favour prior use even over a prior filing, and add weightage to the acquired goodwill/reputation arising from such use as a determining factor, even over proprietary rights in the same. This raises an interesting question of whether filing a trademark application in one jurisdiction should give it some edge or priority when filing a similar (but subsequent) application in another jurisdiction. It is no surprise that filing multiple applications is a cumbersome procedure and at times an applicant may miss out on the opportunity of securing registration in one country on account of becoming the subsequent proprietor to file the trademark application there. So how can we best protect the prior rights of the Applicant? We discuss the same below.

Statutory genesis of 'priority application' in trademarks can be traced back to Article 4 of the Paris Convention for the Protection of Industrial Property, 1883, which underlines the principle of national treatment or equal treatment to applications across all contracting States. The provision entitles an applicant to file an application in respect of a trademark in any one of the Union countries and subsequently seek statutory protection in another Union country by filing another application within a stipulated period in order to claim the date of filing of the parent application as the date of filing the subsequent application, or claiming the 'right of priority', even though the jurisdictions are distinct. The provision is key to obtain priority in filing in 'first to file' jurisdictions, as well as allowing the applicant the opportunity to determine which jurisdictions to seek statutory protection in without compromising on their priority claim.

Conceptually, once an application is filed in one of the Union countries or WTO member countries i.e. parent application, the date of such filing is considered as the 'date of priority' from which the stipulated priority filing period of 6 months commences2 . This period would be unaffected by any subsequent use of the trademark in concern.

To illustrate, if the parent application was filed by Applicant A in the United Kingdom on January 01, 2020, the said date of filing will be viewed as the date of priority, and thereafter A will have 6 months, i.e. till June 30, 2020, to claim priority from its earlier filing in any other of the Union countries, wherein the date of application will also be construed as January 01, 2020, owing to recognition of the priority claim.

However, no person is entitled a date of priority in perpetuity, as the time period for the same is strictly stipulated within the Paris Convention (as being six (6) months for industrial designs and trademarks)3 . Thus, once this priority window is missed, despite having a prior application in a Convention country, the same priority date of filing cannot be claimed subsequently in any other Convention country. However, unlike the eventuality envisioned under the Madrid Protocol, the subsequent priority application, once appropriately filed in a fellow Convention country, will proceed independently of the fate of the parent application, i.e. its status will remain unaffected even if the parent application is withdrawn, abandoned or refused before being published in a journal or gazette for public viewing or opposition as its fate will be determined as per the local trademark legislations of the country and will not be co-dependent on the fate of applications filed in other jurisdictions.

Usually, a claim of priority is supported by a declaration or affidavit which entails details about the first application such as date of first filing, application, country of registration, registration certificate etc.

But is the applicant entitled to claim more than one priority on his trademark application? Going by the statutory provision in the Paris Convention, a person is entitled to file multiple claims of priority, and applicability of such priority claim cannot be challenged on grounds that each of such claim(s) originated from separate Union countries or the application claiming multiple priorities contains one or more elements which were previously excluded in the first application(s)4 .

India became a signatory to the Paris Convention on December 7, 1998 and drawing reference from Section 1545 of the Trade Marks Act, 1999, a person or his legal representative or assignee can file a subsequent application within the statutory period (6 months) with a claim of priority and the date of filing the first application in the convention country will be deemed as the date of registration in India6 . 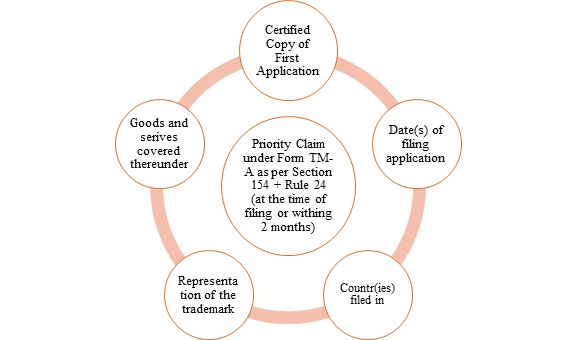 The procedure as prescribed for claiming a date of priority under Rule 24 of the Trade Marks Rules, 20177 mandates for the applicant to file a declaratory statement indicating that priority is being claimed, along with certain particulars. So in case an applicant has filed multiple applications in more than one convention country, the same must be disclosed to the Registrar. But it is pertinent to note that the Indian trademark law states that in such cases the period of six months shall be counted from the date on which the earlier or earliest of those applications was filed8.

As per the provisos under Rule 24, an applicant can only claim a single priority in respect of all the goods or services as mentioned while filing a trademark application in India9 . Further, this priority claim will only extend in respect of goods or services as included in the first application10 . This is a stark contrast from the flexible provision as accorded under the Paris Convention, wherein absence of few elements in the parent applications has no bearing on subsequent application's priority claims.

Practically, this can wedge a disadvantage in the applicant's claim over its trademark. Suppose a multi-class application is filed in India on January 01, 2020 in respect of trademark 'XYZ' in Classes 03 (cosmetics) and 05 (pharmaceuticals) and the applicant had two separate claims of earlier filings, one in United Kingdom (July 01, 2019 in Class 03) and one in the United States (September 01, 2019 in Class 05). Going by the provisions as aforementioned, the Registry will consider only a single claim of priority and only accord such priority in respect of goods as covered in the first application. In the present scenario, the applicant will not be able to secure such claim of earlier filing as the application is multi-classed and would ultimately have to file separate applications.

International Registration under the Madrid Agreement

Since India's accession to the Madrid Protocol in 2013, the Trade Marks Act, 1999 was amended to incorporate such changes in its statutory provisions by way of which a person can claim multi-class protection with just a single application in several countries. The only downside is the processing time of such applications i.e. statutorily 18 months12 .

Although the treaties as enumerated above have a few blind spots but their underlying principle for implementation have enabled a far greater benefit and endowed the law of trademarks as possessing one of the most streamlined and timely procedure for acquiring crucial IP rights.

2 Article 4 of the Paris Convention for the Protection of Industrial Property; https://wipolex.wipo.int/en/text/287556; accessed on August 10, 2020

5 Section 154 "Government to be bound special provisions relating to applications for registration form citizens of convention countries" of the Trade Marks Act, 1999; http://www.ipindia.nic.in/writereaddata/Portal/IPOAct/1_43_1_trade-marks-act.pdf; accessed on August 10, 2020

11 Regulations under the Protocol Relating to the Madrid Agreement Concerning the International Registration of Marks ; https://wipolex.wipo.int/en/text/545522; accessed on August 11, 2020.

Isha Tiwari, has assisted in the research of this article.

ARTICLE TAGS
India Intellectual Property Trademark
POPULAR ARTICLES ON: Intellectual Property from India
Internet And The Determination Of Jurisdiction In The Case Of Trade Mark Infringement
S.S. Rana & Co. Advocates
Internet has marked its presence in the commercial world in an unprecedented way. With businesses moving online to escalate their accessibility to a wider range of customers in the market, ...
Can # Hashtags Be Protected As Intellectual Property In India?
Legacy Law Offices
In an ever-evolving era of digitization and mobile telephony, social media has become a quintessential platform for business development and marketing.
Assignment And Licensing Of Copyright
S&A Law Offices
Copyright is a protection given to the creators of certain types of works as an acknowledgment to their intellectual input
A Study On: Novartis AG v. Union Of India
Khurana and Khurana
Intellectual property is an intangible form of property while a ‘Patent' is a subset of intellectual property.
Patent Infringements And Their Types
S&A Law Offices
Patent is one of the most important forms of Intellectual Property (IP). The term of a patent is typically 20 years from the Priority date of the application.
No Bar On Filing Infringement Suit Against Registered Trademarks And For Passing Off
LexOrbis
Recently, in the matter of Good Life Industries v. J R J Foods Pvt. Ltd. C/AO/10/2021...
FREE News Alerts
Sign Up for our free News Alerts - All the latest articles on your chosen topics condensed into a free bi-weekly email.
Register For News Alerts
Article Tags
India Intellectual Property Trademark
Related Articles
The IP Stack For Protecting Software In India: Copyright, Patents, Trade Secrets Obhan & Associates
From Distinctiveness To Genericide: Avoiding Trademark Ruin Obhan & Associates
Exports Under The Bolar Exception: A Key Arrow In The Indian Generics Quiver Obhan & Associates
It's A Wrap! Intellectual Property Round-Up 2022 G&W Legal
Swiss Military Trademark Case Khurana and Khurana
Mondaq Webinars
Considering the Nigerian Start-Up Act & The Opportunities for Tech
Oake Legal
A Guide for Business and Investors – The Sleeping Giant; Why is Nigeria the New Emerging Market for Global Business
Threshing Fields Law Practice
More Webinars
Comparative Guides
Alternative Investment Funds
Artificial Intelligence
Aviation Finance
Aviation Regulation
Blockchain
More Guides
Mondaq Advice Centres
India
Trademarks
India
Arbitration, Litigation and Conciliation
India
Insolvency
Global
Trademarks in SAARC Countries
More MACs
Curated Content
Fast Tracking Through The Patent Prosecution Highway In India
Obhan & Associates
Divisional Applications And Plurality Of Invention In India
Obhan & Associates
Do Scientific Publications Exempt Patent Applications From Anticipation?: The Indian Position
Obhan & Associates
Preparing For Invention Disclosure Meetings: A Guide For Inventors
Obhan & Associates
Patenting 3d Bioprinting In India
Obhan & Associates
Upcoming Events
Mondaq Social Media