by Priya Adlakha and Tanvi Bhatnagar
S.S. Rana & Co. Advocates
Your LinkedIn Connections
with the authors

THEOS and THEOBROMA are both renowned premium bakery outlets serving the consumers much more than just delicious patisseries, for a pretty long time now. Since the respective outlets deal with identical goods and services and have the common starting syllables 'THEO' in their brand names, they entered into a cake war, which is finally baked by the Hon'ble Delhi High Court. Before, reaching the conclusion as to how the cake was well baked, it is imperative to know the background of the recipe (dispute).

THE DISPUTE: BEFORE THE BOMBAY HIGH COURT:

In this suit, Theobroma claimed to be the prior user of the marks 'THEOBROMA' and 'THEOS' in respect of identical goods and services, from the opening of its first retail outlet in Mumbai in 2004 under the trading style of 'THEOBROMA Food of the Gods'. THEOBROMA relied upon its following trade mark registrations/ applications, which are as below: 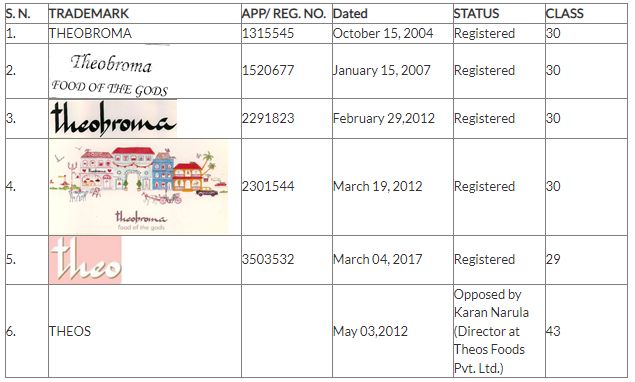 It is relevant to note here that the last application mentioned in the aforesaid table for the word mark 'THEOS' (#2325888) has been opposed by the Director of Theos i.e. Mr. Karan Narula.

Apparently, there is no injunction order or any other interim relief, granted by the Hon'ble Bombay High Court in favour of THEOBROMA and the said suit is still pending adjudication.

BEFORE THE DELHI HIGH COURT:

In 2021, Theos Foods Pvt. Ltd. & Ors. (hereinafter referred to as "Theos") filed a suit 2 , seeking a decree of permanent injunction from trademark infringement, passing off action, unfair competition, dilution, blurring, damages, rendition of accounts and delivery up against Theobroma Foods Pvt. Ltd. (hereinafter referred to as "Theobroma") before the Delhi High Court.

Theos operates a chain of bakeries/restaurants/cafés/lounges under the mark 'THEOS'/'THEO'S' in the Delhi-NCR region and has a wide variety of products on its menu such as chocolates, cookies, a wide selection of desserts and cheesecakes, hot/cold beverages among other milk and non-milk-based products.

It has been claimed by Theos that the mark 'THEOS'/'THEO'S' was coined and adopted by them in the year 2008 and to substantiate the same following trade mark registrations/applications were replied upon by Theos:

Thus, Theos claimed to have used the mark continuously and uninterruptedly in respect of bakery related products in Class 30 and restaurant services in Class 43, and its marks are stated to have garnered valuable goodwill and reputation to its brand.

The case of Theos is that Theobroma was never using the mark 'THEOS' but has now started expanding and using the same in respect of pastries, chocolates, beverages, etc. They sought injunction against Theobroma from infringing the marks 'THEOS', 'THEO'S' and 'THEO'S PATISSERIE & CHOCOLATARIE'.

The Delhi High Court vide its order dated September 13, 2021, refused an ex-parte ad-interim injunction in favour of Theos, while observing that Theobroma's trademark is registered and they are entitled at very least, to an opportunity to respond to the injunction application before the Court passes an order.

The matter came up for hearing before Hon'ble Ms. Justice Prathiba M. Singh, IPD, Delhi High Court on July 8, 2022, wherein the Hon'ble Court granted an opportunity to the parties to explore the possibility of amicable settlement, before adjudicating on the merits of the case.

The Hon'ble Court noted down that the main grievance of Theobroma before Bombay High Court was Theos' use of the mark 'THEOBROMA', which Theos is no longer using and the only dispute between the parties is now with respect to the mark 'THEOS'.

Finally, the parties were able to arrive at an amicable settlement on the following terms:

Author's view: Sometimes, with such long and concurrent use, it becomes difficult for the Courts to strike a balance of right between the parties without making either party suffer, more specifically, where the adoption of the subsequent mark seems to be bonafide or sufficiently distinguishable. Therefore, it is in the best interest of the parties to settle their disputes amicably to end their long pending disputes before they become luxurious litigation. Sometimes, even a pie of the cake is worth, if not full!

This article was first published on Bar and Bench here.

ARTICLE TAGS
India Intellectual Property Trademark
POPULAR ARTICLES ON: Intellectual Property from India
A Study On: Novartis AG v. Union Of India
Khurana and Khurana
Intellectual property is an intangible form of property while a ‘Patent' is a subset of intellectual property.
Battle Of Beers: Delhi High Court Grants Protection To Carlsberg
S.S. Rana & Co. Advocates
Single Bench of Delhi High Court, recently adjudicated upon an application for ad-interim injunction in a suit filed by Carlsberg Breweries A/S against Tensberg Breweries Industries Pvt. Ltd. & Ors, being CS (COMM) No. 646/ 2022...
Assignment And Licensing Of Copyright
S&A Law Offices
Copyright is a protection given to the creators of certain types of works as an acknowledgment to their intellectual input
Intellectual Property Updates From India
IndusLaw
The year 2022 has been instrumental from the standpoint of Intellectual Property Rights. With numerous landmark developments in the field, the jurisprudence revolving around different...
Difference Between Passing Off And Infringement Of The Trade Mark
Khurana and Khurana
A Trade mark may be defined as a lawfully protected abstract, word, symbol, color, mark, slogan or a mixture of those related to an organization or a selected product that differentiates it from the others accessible within the market.
Patent Infringements And Their Types
S&A Law Offices
Patent is one of the most important forms of Intellectual Property (IP). The term of a patent is typically 20 years from the Priority date of the application.
FREE News Alerts
Sign Up for our free News Alerts - All the latest articles on your chosen topics condensed into a free bi-weekly email.
Register For News Alerts
Article Tags
India Intellectual Property Trademark
Related Articles
Royalties For Recordings Are A Live Issue TMT Law Practice
Jurisprudential Aspects Of "Shape Mark" Under Indian Trade Marks Law Kan & Krishme
Protecting Trade Secrets In India: Applicable Laws And Benefits S.S. Rana & Co. Advocates
"ZIPOD" vs. "ZOYPOD": A Strict Test Of Deceptive Similarity Under Indian Trade Marks Law Kan & Krishme
Jurisdiction Conundrum Since Abolition Of IPAB Khurana and Khurana
Mondaq Webinars
The New Swiss Data Protection Act - What You Need To Know
FABIAN PRIVACY LEGAL GmbH
Navigating the AI Legal Landscape
INQ Law
More Webinars
Comparative Guides
Alternative Investment Funds
Artificial Intelligence
Aviation Finance
Aviation Regulation
Blockchain
More Guides
Mondaq Advice Centres
India
Trademarks
India
Arbitration, Litigation and Conciliation
India
Insolvency
Global
Trademarks in SAARC Countries
More MACs
Curated Content
Fast Tracking Through The Patent Prosecution Highway In India
Obhan & Associates
Divisional Applications And Plurality Of Invention In India
Obhan & Associates
Do Scientific Publications Exempt Patent Applications From Anticipation?: The Indian Position
Obhan & Associates
Preparing For Invention Disclosure Meetings: A Guide For Inventors
Obhan & Associates
Patenting 3d Bioprinting In India
Obhan & Associates
Upcoming Events
Managing Intellectual Property Disputes
WilmerHale
Panel Bengaluru India
Mondaq Social Media