We are thrilled to share that number of Trademark Applications filed in India has crossed the 5 Million mark!! The trademark application numbered as historic 5000000, filed on June 10, 2021 with the Indian Trademark Registry is as under: 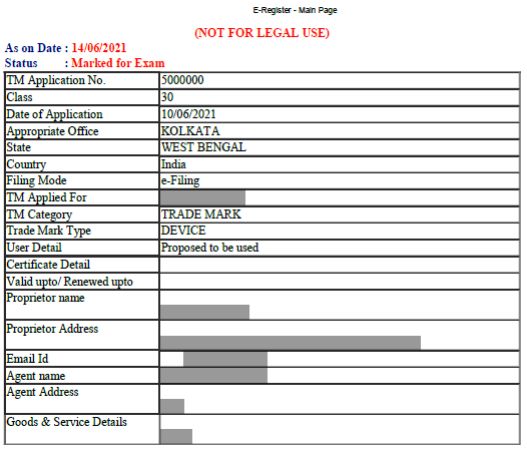 India is drastically transforming and aforesaid figures are a testimony of the same. More and more IP intensive companies and industries are emerging each day and now even Start-ups in India have commenced IP filings and are understanding the substance of IP protection.

A recent Report released by the Department for Promotion of Industry and Internal Trade (DPIIT), Ministry of Commerce and Industry1, published figures indicating the number of Patents filed by Start-ups over the past few years and the same is illustrated below:

The aforesaid statistics showcase a gradual increase in Patent filings by Start-Ups every year. The Government of India through its various initiatives like the Start-up India Campaign and National IPR Policy has floated schemes and enacted legislative amendments which have made IP filings conducive by entities in India.

ARTICLE TAGS
India Intellectual Property Trademark
POPULAR ARTICLES ON: Intellectual Property from India
Patent Law in India
Anand & Anand
The Patents Act 1970, along with the Patents Rules 1972, came into force on 20th April 1972, replacing the Indian Patents and Designs Act 1911. The Patents Act was largely based on the recommendations of the Ayyangar Committee Report headed by Justice N. Rajagopala Ayyangar. One of the recommendations was the allowance of only process patents with regard to inventions relating to drugs, medicines, food and chemicals.
Refusal Of Trademark Registration (Absolute Grounds)
Singh & Associates
Trademarks which are not capable of distinguishing the goods or services of one person from that of another person.
Concept Of Fair Use And Fair Dealing In Copyright
Singh & Associates
Fair use supports "socially laudable purposes," typically, if not exclusively, involving the use of the copyrighted work by a second author
Assignment And Licensing Of Copyright
Singh & Associates
Copyright is a protection given to the creators of certain types of works as an acknowledgment to their intellectual input
Difference Between Passing Off And Infringement Of The Trade Mark
Khurana and Khurana
A Trade mark may be defined as a lawfully protected abstract, word, symbol, color, mark, slogan or a mixture of those related to an organization or a selected product that differentiates it from the others accessible within the market.
All You Need To Know About "Well-Known Trademarks"
Khurana and Khurana
With coming up of the new Trade Mark Rules 2017, a new procedure has been created that allows the Registrar to proclaim a particular trademark as "well known".
FREE News Alerts
Sign Up for our free News Alerts - All the latest articles on your chosen topics condensed into a free bi-weekly email.
Register For News Alerts
Article Tags
India Intellectual Property Trademark
Related Articles
Construing Section 107 (A) Of The Patents Act L. S. Davar & Co.
Dictionary Word with Acquired Distinctiveness – Registerable as a TM Singhania & Partners LLP, Solicitors and Advocates
Case Analysis Of Bacardi And Company Limited v. Bhahety Overseas Private Limited &Ors. CS(COMM) 464/2021 & I.A. 12323/2021 Khurana and Khurana
U‑blox And KPN Settle Patent Dispute And Sign Patent License Agreement Khurana and Khurana
Space Law Protection The New Focus Of IPR Khurana and Khurana
Mondaq Webinars
Investigations and eDisclosure: Drive Down Costs by Understanding Key Data Points Early
OpenText UK Limited
Webinar Berkshire UK
Future Series: Oh Canada! Key Legal Issues for International Companies
Borden Ladner Gervais LLP
Webinar Toronto Canada
More Webinars
Comparative Guides
Alternative Investment Funds
Artificial Intelligence
Aviation Finance
Aviation Regulation
Blockchain
More Guides
Mondaq Advice Centres
India
Trademarks
India
Arbitration, Litigation and Conciliation
India
Insolvency
Global
Trademarks in SAARC Countries
More MACs