The Rules set forth provisions related to additional due diligence to be observed by a SSMI along with the standard due diligence that all intermediaries are bound by (as covered in Part 1 of this series of Articles). A SSMI under the Rules is required to have a physical contact address in India, which should be published on its website, mobile based application or both, to receive any communication addressed to it2. We have set forth below the additional compliances that the Rules provide for SSMIs that includes amongst other things, appointing a grievance redressal team of three as illustrated hereunder3. 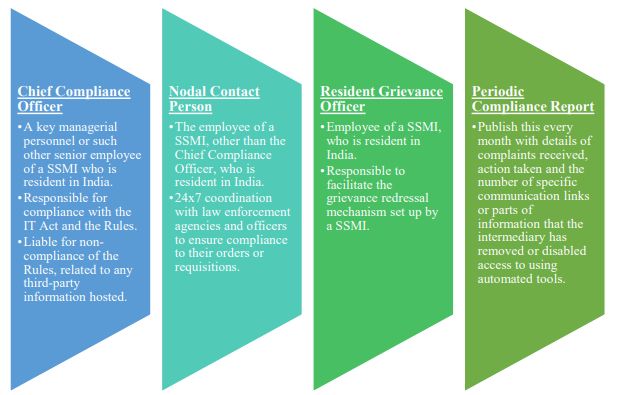 Furthermore, a SSMI providing services primarily in the nature of messaging may also (on receipt of a judicial order) be required to enable the identification of the first originator of the information on its computer resource. This will be solely for the purposes of prevention, detection, investigation, prosecution or punishment of an offence related to the sovereignty and integrity of India, the security of the State, friendly relations with foreign States, or public order, or of incitement to an offence relating to the above or in relation with rape, sexually explicit material or child sexual abuse material, punishable with imprisonment for a term of not less than five years unless other less intrusive means are effective in identifying the originator of the information4. This Rule would be applicable to the messaging services such as Whatsapp.

A SSMI is now also required to adopt technology-based measures and automated tools to proactively identify information that depicts any act or simulation in any form depicting rape, child sexual abuse or information that has been previously removed for being prohibited in the interest of the sovereignty and integrity of India; security of the State; friendly relations with foreign States; public order; decency or morality; in relation to contempt of court or defamation. The Rules provide leeway stating that the SSMI

should be mindful to the interests of free speech and expression and privacy of users while using such technology and tools5.

A SSMI is required to put in motion, mechanisms for the receipt of complaints and grievances in relation to the violation of the Rule. The mechanism is to encompass within its scope assigning ticket numbers for complaint or grievance received and facilitate tracking of the same6.

The Rules curiously provide that a SSMI allow its users to voluntarily verify their accounts by using appropriate methods such as an active Indian mobile number of such users7. Whether voluntary will become mandatory at some point in time remains to be seen.

A SSMI that removes or disables access to any information that is violative of the Rules, on its own accord, is required to, prior to removing any such information, notify the user that created, uploaded, shared, disseminated, or modified the information. The SSMI is required to explain the reasons for removal, provide the user with an opportunity to dispute the action and request for the reinstatement of access to such information. The SSMI also has to ensure that its Resident Grievance Officer oversees the resolution of any disputes raised8.

Intermediaries and SSMIs that do not observe the required due diligence under the Rules not only lose the right to rely on the safe harbour provision of the IT Act (Section 79 of the IT Act) but may also be liable to for punishment under any law for the time being in force including the provisions of the Act and the Indian Penal Code9.

The Rules will surely bring about a change in the way we experience the internet and interact with various social media by marshalling more control, regulation and supervision. However, will the Rules also have far-reaching consequences for online privacy, freedom of speech and expression and access to information and how would those concerns tie in with the anticipated legislation on data privacy? Will the government be able to maintain accountability? Will the Rules create a safer space for users? Only the passage of time shall tell.

Meanwhile, today (a week after the Rules were notified) the Supreme Court of India ("SC") while hearing another matter, commented on the Rules stating that they were grossly inadequate. The bench remarked that upon going through the Rules, they were of the opinion that the Rules had "No teeth. No power of prosecution. These are just guidelines. No mechanism to control it,". The SC opined that to give these Rules "teeth" legislation was required, without which the Government could not control such platforms (OTT platform in this particular case). The Central government informed the SC that they would consider appropriate steps and could prepare a draft legislation and place it before the SC for its consideration.