by Shivani Kundle
Khurana and Khurana
Your LinkedIn Connections
with the authors
To print this article, all you need is to be registered or login on Mondaq.com.

Google is a goldmine to obtain a plethora of information, and users' experience with this onslaught only extends when the information is received through images. Google image provides this to its users by enabling them to experience a world of information visually. Further, the procedure of receiving information on Google images is extremely uncomplicated and fulfilling.

However, this easy access to images by search engines soon unearths a conflict; copyright infringement.  The aforementioned conflict is a product of misplaced affirmation amongst the users that the images in search results are perhaps not protected under copyright. This behavioural flaw amongst users is indicated in a recent research conducted by Smartframe.

The research indicated that the majority of users relied on Google and Google images for searching for pictures. The research further reveals that a whopping 77% directly downloaded images from these searches, through the 'save image as...' option available. This research, by extension, also puts forth the risk of copyright violation of the creators at the hands of unaware users.

This issue of tremendous copyright infringement of photographers has always been a ground for the discontent towards Google's policies to protect creators. Following this discontent and a demand to protect creators efficiently and combat unauthorized usage, Google has introduced a 'Google Licensable Badge' feature. The feature was launched in collaboration with Shuttershock. The feature enables artists and distributors to license their images on their terms. However, it is pertinent to contemplate what this feature holds for the artists and distributors in the aftermath of its launch.

Over the years Google has introduced several features to protect photographers from copyright infringement, however, to a little to no yield. The very first attempt by Google to discourage copyright infringement was in 2018 when it removed the 'view image' option from the search results. The intent herein was to encourage users to visit the original webpage where the images were uploaded to download it. Furthermore, a warning was also included which spelt that 'Images may be subject to copyright.'

Later, Google introduced a feature, where users had the option to filter images as per 'usage rights'. This filter had four options, 'labelled for commercial reuse, labelled for commercial reuse with modifications, labelled for non-commercial use and non-commercial use with modifications'. The feature, however, was largely unfruitful in achieving the desired results. The failure can be attributed to it being extremely complicated for users to navigate through because of the extensive legal jargons. Also, the filter only worked for the 'labels' within which the images were tagged and failed to direct the users towards the 'rights' attached to the images.

The new Google Licensing Badge is an attempt at redemption from the aforementioned unsuccessful efforts to reduce copyright infringement. The Google Licensable Badge has brought forth two major features. First, the licensing information is provided to the users in the search results by a 'Licensable' icon which appears on the thumbnail of the image. Further, clicking on the licensable image, leads users to a page wherein additional information regarding the license is provided to the users. 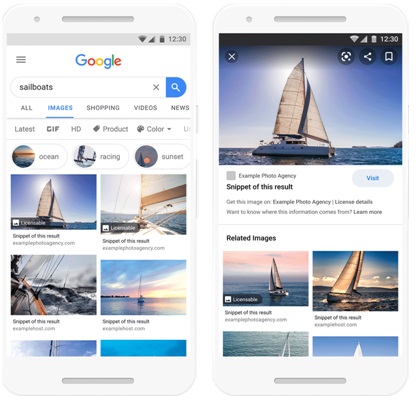 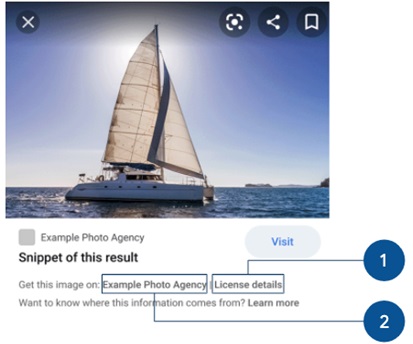 The Second feature provided by Google enables the users to filter out search results under 'usage rights' such as 'Creative Commons licences' and 'Commercial and other licenses'.

Artists and distributors can avail the benefits of this feature by either of the two methods, i.e., 'Structured data' or 'IPTC Photo Metadata'. Structured data is essentially a feature which associates the image with the original page with the mark-up. It is however important to add structured data to every time an image is used. IPTC Photo Metadata, on the other hand, is embedded within the image itself. Herein, the creator is only required to embed IPTC photo data once (per image) and it will move along with the photo from to page.

Implications for Artists and Distributors

Google launched this feature in collaboration with Shutterstock. Therefore, Google's intent behind this launch can be understood from Shutterstock's VP Content Operation, Paul Brennan's statement:

"Google Images' new features help both image creators and image consumers by bringing visibility to how creators' content can be licensed properly. We are pleased to have worked closely with Google on this feature, by advocating for protections that result in fair compensation for our global community of over 1 million contributors. In developing this feature, Google has clearly demonstrated its commitment to supporting the content creation ecosystem."

Though, it is pertinent to note that with this new feature, Google is not essentially attempting to enter into licensing business for images. Google is rather trying to create an environment wherein more and more people flock to it for image searches for a variety of reasons. The ultimate intent is to capitalize on it. This makes it imperative to analyse and gauge what this new feature entails for creators and their copyright.

The Google Licensing Badge feature is largely welcomed by creators and distributors. The reason being, the previous four license filter features made available images which were essentially in the public domain or were free to download. This resulted in no revenue incentive for photographers. The new feature enables artists to license their images on terms outlined by them and provides them with an opportunity to generate revenue.

However, the feature might not be the end and be all for the plight of artists and distributors. It has been pointed out that the license badges do not appear in the first 200 or so image search results. They only appear when the filter for 'usage rights' is applied.

Finally, merely providing licensing badges on Google, in isolation will not suffice. It is pertinent that other search engines and social media websites also avail similar features to ensure that photographers are protected and fairly incentivized.

Photographers are susceptible to high rate copyright infringement about disregard by users and easy access to images through the internet. Therefore, the 'Google Licensing Badge' feature has been highly anticipated and welcomed by creators and distributors. The feature ensures that the creators can draw the terms for licensing their images and provide them autonomy over it. The feature, however, runs the risk of falling short at providing complete protection to the creators.

ARTICLE TAGS
India Intellectual Property Copyright Licensing & Syndication
POPULAR ARTICLES ON: Intellectual Property from India
Patent Law in India
Anand & Anand
The Patents Act 1970, along with the Patents Rules 1972, came into force on 20th April 1972, replacing the Indian Patents and Designs Act 1911. The Patents Act was largely based on the recommendations of the Ayyangar Committee Report headed by Justice N. Rajagopala Ayyangar. One of the recommendations was the allowance of only process patents with regard to inventions relating to drugs, medicines, food and chemicals.
Patents Law In India - Everything You Must Know
Vaish Associates Advocates
The presentPatents Act, 1970 came into force in the year 1972, amending and consolidating the existing law relating to Patents in India
Process: Trademark Registration In India
Intepat IP Services Pvt Ltd
Many entrepreneurs do not comprehend the importance of a TM search.
Compulsory Licensing In India
Khurana and Khurana
WIPO defines patent as an exclusive right granted for an invention, which is a product or a process that provides, in general, a new way of doing something, or offers a new technical solution to a problem
A Study On: Novartis AG v. Union Of India
Khurana and Khurana
Intellectual property is an intangible form of property while a ‘Patent' is a subset of intellectual property.
Difference Between Passing Off And Infringement Of The Trade Mark
Khurana and Khurana
A Trade mark may be defined as a lawfully protected abstract, word, symbol, color, mark, slogan or a mixture of those related to an organization or a selected product that differentiates it from the others accessible within the market.
FREE News Alerts
Sign Up for our free News Alerts - All the latest articles on your chosen topics condensed into a free bi-weekly email.
Register For News Alerts
Article Tags
India Intellectual Property Copyright Licensing & Syndication
Related Articles
Pakistan Joins Madrid Protocol S.S. Rana & Co. Advocates
Legal And Ethical Issues Faced By The Start-Ups In India Khurana and Khurana
The Conundrum Of E-commerce And DSEs Khurana and Khurana
Copyright Law And Authorship: Authorship Rights Of Artificial Intelligence Works Khurana and Khurana
Proposal For Adding Educational Institutions To Avail Expedited Examination And Reduced Fees For Patent Application In India LexOrbis
Mondaq Webinars
International Transfer Pricing Trends from a Swiss Perspective - Practical Tips and Lessons Learned
Tax Partner AG
Webinar Zurich Switzerland
Survival Kit for the Latest Trends in U.S Trade Enforcement
Braumiller Law Group, PLLC
Webinar Texas United States
More Webinars
Comparative Guides
Alternative Investment Funds
Blockchain
Cartels
Cybersecurity
Data Privacy
Mondaq Advice Centres
India
Trademarks
India
Arbitration, Litigation and Conciliation
India
Insolvency
Global
Trademarks in SAARC Countries
Global
Investment Immigration
More MACs
Upcoming Events
Mondaq Social Media