With the intent of simplifying and consolidating labour laws, the 2nd National Commission on Labour recommended the rationalisation of existing labour laws into 4 to 5 groups. In pursuance of the recommendation, the Code on Social Security, 2020 ("Social Security Code" or "Code") received the assent of the President on 28 September 2020.

The Code aims to regulate the organised / unorganised (or any other) sectors and extend social security benefits, during sickness, maternity, disablement, etc. to all employees and workers across different organisations. 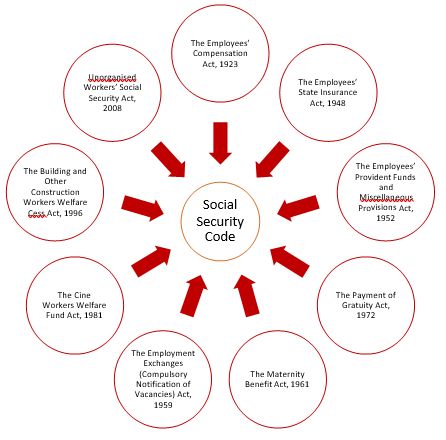 The Code applies to everyone on wages in an establishment, irrespective of occupation.

Earlier, under the Payment of Gratuity Act, 1972, the term "wages" included "all emolument which is earned by an employee while on duty or leave in accordance with the terms and conditions of his employment and which are paid or are payable to him in cash and includes dearness allowance but does not include any bonus, commission, house rent allowance, overtime wages and any other allowance". 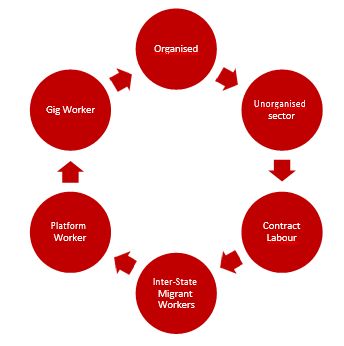 Under the Social Security Code, the term "wages" includes all kinds of remunerations capable of being expressed in monetary terms including basic pay, dearness allowance, and retaining allowance. However, it does not include any overtime compensation, house rent, conveyance allowance, gratuity upon termination, or any retrenchment compensation.

The Code shall have an overriding effect over anything inconsistent in any other law or the terms of any award, agreement, or contract of service, whether it was made before or after this Code came into force.

With the intent to increase the authenticity of the Code, any employee or worker employed in the unorganised sector must establish their identity through aadhar numbers for seeking benefits available under the Code.

Under the Code, the Central Government shall, by notification, frame different schemes for employees such as the Employees' Provident Fund Scheme, Pension Scheme, Deposit Linked Insurance Scheme, etc. The contributions under the different schemes are as follows:

Applicability of Chapters under the Code

Insurance Act 1948, the legislation was implemented as per the notification released by every State. However, under the Code, the Central Government may also extend the applicability to establishments which engage in hazardous occupations. The responsibility under this Chapter rests on the employer for registering their employees with the Employees' State Insurance Corporation, for payment of the contributions and for releasing the benefits to the workers. The Code provides an option to establishments employing less than 10 employees for voluntary membership under the Employees' State Insurance.

The insured persons under the Code shall receive benefits like periodical payments in case of sickness, miscarriage, or sickness due to pregnancy, disablement, and medical treatment. Dependents of an injured or deceased employee are entitled to receive such benefits under the Code.

Continuous service of 5 years is not mandatory for employees working on a fixed-term basis. Instead, such employees shall be paid gratuity on a pro-rata basis. It is a positive step for employees who work on a term basis of employment.

VIII. BUILDING AND OTHER CONSTRUCTION WORKERS

Cess is a tax that is levied for the promotion and development of social services. Under the Code, cess is levied to secure funds for the welfare and social security of workers. It shall be levied on the employer, at rates specified by the Central Government.

The levy and collection of cess for building and construction workers have been charged under the Code at a minimum of 1% and a maximum of 2%. However, unlike the Building and Construction Workers Welfare Cess Act, 1996, the Social Security Code differentiates itself by implementing a process for self-assessment on cess, previously done by government officers.

The Code has distinguished itself from the Unorganised Workers Social Security Act, 2008 ("UWSSA") by creating a distinction between 'unorganised workers', 'gigs', and 'platform workers'. To that end, the Code elaborates on the framing of schemes which includes 'education' for unorganised workers and 'creche' for gigs and platform workers under its coverage, unlike the UWSSA.

Such schemes may be 'wholly' or 'partially' funded by the State Government and other sources, including corporate social responsibility funds. Proper records of the Schemes under this Chapter shall be maintained by the authority notified by the appropriate Government. To be eligible under the Code, a worker must satisfy two requirements: (a) completion of 16 years of age; and (b) submit a self-declaration certificate in the manner prescribed by the Central Government. Additionally, the State Government may provide a helpline facility for unorganised workers, gigs, and platform workers to assist them in registration and avail information relating to the social security schemes.

X. COMPLIANCES UNDER THE CODE

File returns for such period as prescribed by the appropriate Government. 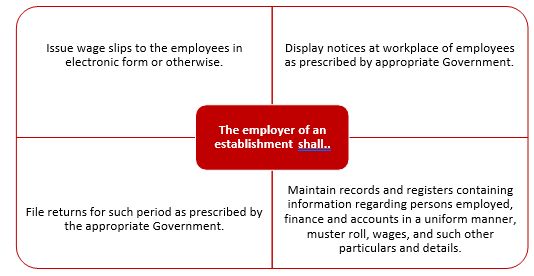 Maintain records and registers containing information regarding persons employed, finance and accounts in a uniform manner, muster roll, wages, and such other particulars and details.

The Code states that the employer shall not reduce an employee's wages or the total amount of benefits to which he is entitled because of his obligation to pay any contributions required under this Code. Further, the employer shall be liable to pay simple interest on the amount due under this Code from the due date till the date of payment at a rate as may be notified by the Central Government from time to time.

The Code also states that when an employer transfers his establishment by sale, gift, lease, licence, or in any other way, the employer, and the transferee will be jointly and severally liable to pay the amount due for any liabilities, cess, or any other amounts payable under this Code till the date of such transfer. However, the liability of the transferee shall be limited to the value of the assets obtained by him through such transfer.

Under the Code, for filling up any vacancies, the establishments will be required to report such vacancies to career centres, from such date as specified in the notification issued by the appropriate government. However, the employer shall be under no obligation to recruit any person through career centres, merely because a vacancy has arisen. Such reporting of vacancies to career centres shall not apply to employment like agriculture (private sector establishment) except employment in plantation, domestic service, staff of Parliament, or any State Legislature, employment for a term of fewer than 90 days, a non-governmental establishment with less than 20 employees, etc.