1. The UN Climate Summit: What is it?

They are known as COPs, or "Conference of the Parties," for short. The parties are the participating nations that ratified the first UN climate accord in 1992.

The 27th annual UN climate conference is known as COP27. It will be held in Sharm el-Sheikh from November 6 to November 18 2022.

2. Why do we need COP meetings?

Human-caused emissions, primarily from the combustion of fossil fuels like coal, oil, and gas, are to be blamed for global warming.

According to the Intergovernmental Panel on Climate Change, which is comprised of climate scientists from the UN, global temperatures have increased by 1.1°C and are on track to reach 1.5°C.

According to the IPCC, half of the world's population might be exposed to heat and humidity that pose a hazard to their lives if temperatures increase by 1.7°C to 1.8°C above levels from the 1850s.

To avert this, 194 nations signed the Paris Agreement in 2015, vowing to "pursue efforts" to limit global rising temperatures to 1.5°C.

Over 200 governments have been invited.

However, certain prominent figures, such as Russian President Vladimir Putin and UK Prime Minister Rishi Sunak, are not anticipated to attend. These nations still have representatives scheduled. China and other nations have not declared whether their leaders would attend. Businesses, think tanks, community organisations, religious organisations, and environmental charities will all participate.

Africa will be hosting the COP for the fifth time.

The governments of the area are hoping that it would highlight the serious effects of climate change on the continent. According to the IPCC, Africa is one of the world's most vulnerable continents.

However, there has been debate concerning the venue's selection of Egypt.

Some environmental and human rights activists claim that since they have criticised the government's record on human rights, they have been barred from the event.

6. What will the focus of this COP be?

Right now, the world is still far from accomplishing the goals set forth in the Paris agreement to minimise climate change. In 2015, 195 nations, including India, signed the Paris Agreement, pledging to keep global warming far below 2 degrees and to pursue measures to keep it below 1.5 degrees. Along with addressing loss and damage brought on by climate change, countries also resolved to speed up action on numerous other fronts and increase support for climate action in poorer nations. It was a crucial step in tackling the world's climate change problem. The most recent research confirms that going beyond the temperature goal of the Agreement will be terrible for humanity, resulting in disastrous extreme weather conditions and possibly unliveable conditions.

The meeting this year is being referred to as an "implementation COP," where discussions will be concentrated on implementing plans to achieve earlier agreed-upon benchmarks. A new finance plan for tackling loss and damage from climate change will be developed, with a particular focus on solidifying earlier climate financing pledges.

Climate adaptation is the term used to describe how the world alters in response to climate change. Compared to mitigation, adaptation activities have so far received much less money. However, it is becoming increasingly obvious that we need to concentrate more on adaptation initiatives that safeguard the people who are most vulnerable to the effects of climate change as the world experiences more frequent and severe storms, floods, fires, and other climate-related disasters.

6.2 Funds for losses and damages

Low and middle-income nations suffer disproportionately from climate-related disasters since they have produced significantly fewer greenhouse gas emissions that contribute to global warming. In order to make up for the harm that developing nations have already caused, the UN has suggested that wealthier and developed nations pay "loss and damage" money.

It is the term used to describe funds provided by industrialised nations to assist poor nations in constructing renewable energy infrastructure, cutting emissions and adapting to the effects of climate change.

A promise to keep global warming to 2 °C (3.6 °F) over pre-industrial levels, and ideally to 1.5 °C (2.7 °F), was made by world leaders at COP21 six years ago. According to scientists, achieving this goal will significantly lessen the negative effects of climate change. Even if all nations are successful in decreasing their national emissions to the levels they have committed to, we are still not on schedule to meet this objective.

7. THE IMPACT OF THE IPCC REPORT 2022 ON BUSINESSES

The Intergovernmental Panel on Climate Change (IPCC), the foremost scientific authority on climate change, has said that under all scenarios consistent with these objectives, global emissions must decline significantly through the 2020s. Post COP 26 discussions in Glasgow, IPCC report of 2022 does put forward interesting aspects which surely would come up in discussions of COP 27 in November 2022.

Below is a summary of the report's most important points. The conclusions will have a big influence on how business is carried out around the world in all industries.

Across all areas and sectors, there has been progress in adaptation planning and execution, although it is still unevenly distributed. These regional and sectoral deficits should be filled, according to public institutions. The legislative/regulatory environment may become unpredictable as a result, but there may also be opportunities for enterprises to develop integrated multi-sectoral solutions.

The Group II Report supports markets that are climate responsive, especially those in the energy industry. It promotes the use of smart grid technology, reliable transmission networks, and enhanced capacity to supply shortages, as well as better design standards for energy assets in light of actual and expected climate change. According to the Panel, such marketplaces are very feasible in the medium and long run. The agricultural industry and other industries that depend on the exploitation of natural resources are also pushed to embrace modernization or "green agreements." The modernization of these marketplaces will necessitate company adaptation.

7.3 Change of focus from mitigation to adaptation

Businesses may need to take a more preventative approach to climate change-related harm, according to the UN's Intergovernmental Panel on Climate Change (IPCCR), if they want to avoid unavoidable climate change risk connected loss. The panel asserts that there may not be enough forward thinking in the current emphasis on adaptation, mitigation, and adaptation.

7.4 Enhanced focus on monitoring and evaluation

In contrast to the previous Group I Study from 2021, which focused on enhanced monitoring and assessment as an effective risk management strategy, this report emphasises the significance of scenario planning. Businesses can assess their adaptation progress, understand the efficacy and equity of their adaptation mechanisms, and contribute to continuing adaptation processes through effective monitoring and evaluation.

Businesses will need to modify their objectives to fit with this purpose. Policies and regulations may be used to promote investment that is in line with encouraging climate resilient development. Additionally, the private sector would have to prioritise social justice, equity, and risk minimization while making development decisions.

In order to assist large-scale funding of adaptation and climate resilience, businesses may be expected to play a significant role. Previously, this was accomplished through tools like green, social impact, and resilience linkages. According to the Group II Report, tracking such instruments has proven to be challenging, and corporations may need to be more open.

7.7 The Current State of the Climate

Around 50% of plant and animal species have experienced population declines as a result of climate change. It has also resulted in decreased hydropower and thermoelectric generation as well as rising starvation and disease transmission concerns. It has been discovered that many of these problems disproportionately affect weaker populations, including minorities and low-income households.

Even for the scenario with very low greenhouse gas emissions, there is now a 50% chance that surface temperatures would approach or surpass 1.5°C by the middle of the century. Snowmelt water used for irrigation may decrease by as much as 20% in some basins at 2°C, and the global glacier mass will see losses of 18–13%. A rise in extreme weather occurrences is predicted by the Group II Report. At 2.7°C of global warming, 60% of megacities will experience at least one day per year with a heat index above 40.6°C, and this number will nearly double at 4°C.

According to the Group II Report, serious risks are rarely caused by a single component; as a result, risk assessments must take into account a number of elements, including irreversibility, thresholds, cascade effects, the likelihood of consequences, and the efficacy of adaptive methods.

In response to shifting climatic conditions, many ecosystems will soon transcend their historical experience of their limits, which will further increase uncertainty for potential climate futures and risk assessment planning. Future inequality, poverty, livelihood security, and wellbeing are expected to be impacted by near-term adaptation actions.

Ecosystem hazards can be decreased by adapting, but this should not be done at the expense of reducing greenhouse gas emissions. However, it is not yet clear whether solar radiation modification techniques have the potential to endanger people and ecosystems in new ways. Reducing the effects of climate change requires improved health, education, and basic social services for both the general populace and farmers. 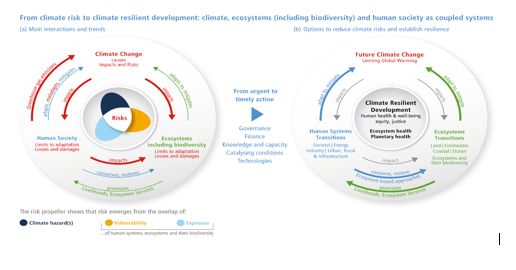 The Lancet Countdown 2022 ( October 2022 ) did come up with interesting observations which surely would find way into the 2 week COP 27 deliberations. Some important observations are put below:

8.2 Planning, Adaptation, and Resilience for Health 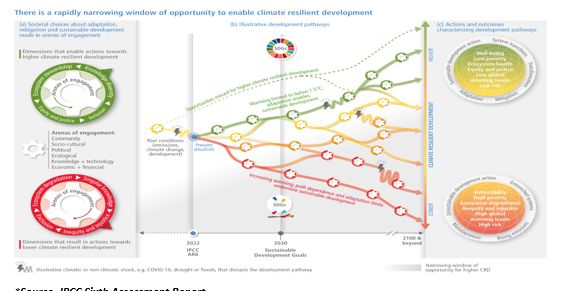 COP 26 had an after- effect globally to have discussions under different forums for immediate action plans globally. Discussion outcomes at these forums would be put up for discussions in COP 27 .Few of the important ones are listed as below: