India: Hierarchy Of Courts In India 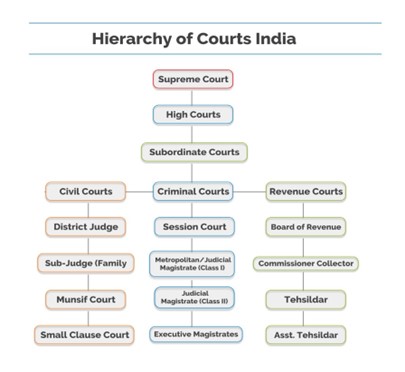 The Supreme Court has original, appellate and advisory jurisdiction. Its exclusive original jurisdiction includes any dispute between the Centre and State(s) or between States as well as matters concerning enforcement of fundamental rights of individuals. The appellate jurisdiction of the Supreme Court can be invoked by a certificate granted by the High Court concerned in respect of any judgment, decree, or final order of a High Court, in both civil and criminal cases, involving substantial questions of law as to the interpretation of the Constitution or any law. The appellate jurisdiction of the Supreme Court can also be invoked through the residuary power of Special Leave Petition, which is to be exercised only in cases when any substantial question of law is involved, or gross injustice has been done. Supreme Court decisions are binding on all Courts/Tribunals in the country and act as precedence for lower courts. Under Article  141  of  the  Constitution,  all  courts  in  India  are  bound  to  follow  the decision of the Supreme Court as the rule of law. Further, Article 142 of the Constitution  empowers  the  Supreme  Court  to  pass  any  order  as  may  be necessary for doing complete justice between the parties. The Supreme Court, has over the years, frequently relied upon Article 142 to meet the ends of justice, and introduced the concepts of absolute liability, prospective application of a particular judgment, etc.

In some states, there are some lower courts (below the district courts) called Munsif's courts and small causes courts. These courts only have original jurisdiction and can try suits up to a small amount.  Thus, Presidency-  Small  Causes Courts cannot entertain a suit in which the amount claimed exceeds Rs. 2,000. However, in some States, civil courts  have  unlimited  pecuniary jurisdiction. Judicial officers in these courts are appointed on the basis of their performance in competitive examinations held by the various States' Public Service Commissions.

Special courts or Tribunals also exist for the sake of providing effective and speedy justice (especially in administrative matters) as well as for specialized expertise relating to specific kind of disputes. These Tribunals have been set up in India to look into various matters of grave concern. The Tribunals do not have to follow any uniform procedure as laid down under the Civil Procedure Code or the Indian Evidence Act but they have to follow the principles of Natural Justice. The Tribunals that need a special mention are as follows:

An interesting feature of the Indian legal system is the existence of voluntary agencies called Lok Adalats (Peoples' Courts). These forums resolve disputes through methods like Conciliation and Negotiations and are governed by the Legal Services Authorities Act, 1987. Every award of Lok Adalats shall be deemed to be a decree of a civil court and shall be binding on the parties to the dispute. The ADR mechanism has also proven to be one of the most efficacious mechanisms to resolve commercial disputes of an international nature. In India, laws relating to resolution of disputes have been amended from time to time to facilitate speedy dispute  resolution  in  sync  with  the  changing  times.  The Judiciary has also encouraged out-of-court settlements to alleviate the increasing backlog of cases pending in the courts. To effectively implement the ADR mechanism, organizations like the Indian Council of Arbitration (ICA) and the International Centre for Alternate Dispute Resolution (ICADR) were established. The ICADR is an autonomous organisation, working under the aegis of the Ministry of Law & Justice, Government of India, with its headquarters at New Delhi, to promote and develop ADR facilities and techniques in India. ICA was established in 1965 and is the apex arbitral organisation at the national level. The main objective of the ICA is to promote amicable and quick settlement of industrial and trade disputes by arbitration. Moreover, the Arbitration Act, 1940 was also repealed and a new and effective arbitration system was introduced by the enactment of the Arbitration and Conciliation Act, 1996. This law is based on the United Nations Commission on International Trade Law (UNCITRAL) model of the International Commercial Arbitration Council.

In  2015,  the  Arbitration  and  Conciliation  Act,  1996   was  amended  to  bring robust changes more particularly, structuring a model fee schedule of arbitrators, restricting interference by Courts in arbitration cases, restricting time schedule for completion of arbitral proceedings, provision for "Fast Track" proceedings for completion of proceedings within 6 months. In 2019, few more amendments were introduced in the Arbitration and Conciliation Act, 1996, most significantly, introduction of Arbitration Council of India for framing policies for governing the grading of arbitrators, accreditation of arbitrators, making recommendations to the Government of India on various aspects.

Likewise, to make the ADR mechanism more effective and in coherence with the demanding social scenario, the Legal Services Authorities Act, 1987 has also been amended from time to time to endorse the use of ADR methods. Section 89 of the Code of Civil Procedure, as amended in 2002, has introduced conciliation, mediation and pre-trial settlement methodologies for effective resolution of disputes.  Mediation, conciliation,  negotiation,  mini  trial,  Lok  Adalats  and Banking Ombudsman have already been accepted and recognized as effective alternative dispute-resolution methodologies.

A brief description of few widely used ADR procedures is as follows: