India: Hierarchy Of Courts For Civil Cases In India 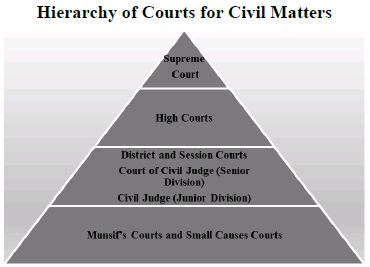 The Supreme Court has original, appellate and advisory jurisdiction. Its exclusive original jurisdiction includes any dispute between the Centre and State(s) or between States as well as matters concerning enforcement of fundamental rights of individuals. The appellate jurisdiction of the Supreme Court can be invoked by a certificate granted by the High Court concerned in respect of any judgment, decree, or final order of a High Court, in both civil and criminal cases, involving substantial questions of law as to the interpretation of the Constitution. Supreme Court decisions are binding on all Courts/ Tribunals in the country and act as precedence for lower courts. Under Art 141 of the Constitution, all courts in India are bound to follow the decision of the Supreme Court as the rule of law.

In some States, there are some lower courts (below the District Courts) called Munsif's Courts and Small Causes Courts. These courts only have original jurisdiction and can try suits up to a small amount. Thus, Presidency Small Causes Courts cannot entertain a suit in which the amount claimed exceeds Rs 2,000.2 However, in some States, civil courts have unlimited pecuniary jurisdiction. Judicial officers in these courts are appointed on the basis of their performance in competitive examinations held by the various States' Public Service Commissions.

Special courts or Tribunals also exist for the sake of providing effective and speedy justice (especially in administrative matters) as well as for specialised expertise relating to specific kind of disputes. These Tribunals have been set up in India to look into various matters of grave concern. The Tribunals that need a special mention are as follows:

It also needs special mention here that certain measures like setting up of the National Company Law Tribunal (NCLT) to streamline and effectuate the liquidation proceedings of companies, dispute resolution and compliance with certain provisions of the Companies Act, 20133 are also in the pipeline.