by Lokesh Vyas
Khurana and Khurana
0 Liked this Article
To print this article, all you need is to be registered or login on Mondaq.com.

Patentability of pharmaceutical drugs and other issue associated with the patent have been a moot point all over the world. Like other developing countries, India has also started granting patent rights to pharmaceutical drug products since the year 2005. The biggest concern that comes up in this scenario is of 'Ever greening strategies' which are dealt in section 3(d) of the Indian Patent Act, 1970. The said section proscribes the grant of patent to a new form of a known substance unless it substantially enhances the therapeutic efficacy of the drugs. Thus, the need to strike a balance between public rights i.e. drugs accessibility and private rights of innovative companies gets redoubled. Furthermore, 'the standard of therapeutic efficacy' is also a moot point and poses a bigger question to the judiciary and other competent authorities while granting or denying Patent protection.

Thus, it is very important to set the rigorous patentability standards for granting patent on a particular drug otherwise its repercussion will not only be detrimental to the general public (esp. patients) but also to the entire patent arena in the form of extended absolute monopolization period, exploitation of other competitors, and more importantly as an impediment the production of generic drug and causes delay of entrance of generic drugs in the market.

A pharmaceutical company famous for its HIV/AIDS drug which combines Lopinavir and Ritonavir did not file for patents on the two base compounds in Malaysia. However, from 1999 to 2006, several secondary patents were granted on the base compounds by the Malaysian intellectual property office. All over the world, the base compounds for patents for Lopinavir and Ritonavir have expired between 2014 and 2017 but in Malaysia, last secondary patent will expire in 2027 (Here). It shows that even after the expiration of base compounds in Malaysia and other counties, the patent life of the drug has increased by 10-12 years. As a result, availability of a generic version of such drugs remains a far cry in Malaysia. One unavoidable issue that arises due to such scenario is the high prices of HIV/AIDS drugs as per the Malaysian Competition Commission review of the pharmaceutical sector.

While citing the data of Malaysian health ministry, it was shown that the patented drug costed US$1,489 (RM6,112) per patient per year under a Health Ministry procurement contract, whereas a generic version of such drug can be obtained at US$268 (RM1,100) from India.

Like other IP countries, Malaysia also needs to ensure that drug patent application has an invention which is new, involves an inventive step and is capable of industrial application. But such criteria or standard is not defined in a country, the ultimate repercussions would be negative such as extended monopoly period which would further create an impediment for a generic version of drugs from entering the market.

The above argument brings our attention to the commonly used strategy of pharmaceutical companies called 'patent ever greening'. It is referred to the practice whereby pharmaceutical firms extend the patent life of a drug by obtaining additional 20-year patents for minor reformulations or other iterations of the drug, without necessarily increasing the therapeutic efficacy and thus gets multiple secondary over a pharmaceutical compound.

Therefore, it is essential for the ministry for IP and the patent office to come up with more stringent patentability criteria for pharmaceutical patent applications in order to avoid the practice of secondary patents and patent ever greening.

Notably, the data from the US Food and Drug Administration show a decline in the number of chemical entities for medicines since 1994 but at the same time, it reveals that there is an increase in number of registration of patent (Here). This growth in pharmaceutical patents is a problem in not only in the developed countries but also in the developing countries said Ms Sangeeta, legal advisor Third World Network. In furtherance of the same, an Inquiry by the European Commission in 2009 unveiled that in relation to 219 drugs, out of the 40,000 patents applications granted and pending, 87% were secondary patents, Ms. S. Sangeeta added. She further said that the delay in the entry of generic versions cased a loss of around 3 billion Euro.

Considering "patents ever greening" cases and other detrimental strategies of Pharmaceutical companies in 2016, it was recommended by the Report of the United Nation Secretary General's High Level Panel on Access to Medicines that WTO Members should adopt and apply rigorous definitions of invention and patentability that are in the best interests of the public health of the country and its inhabitants to curtail the ever greening of patents, and to award patents only when genuine innovation has occurred. Condemning court process as time consuming and expensive, Ms S. Sangeeta proposed guiding measures for Malaysia stating that it should introduce administrative pre- and post- grant oppositions system to patents. Such a mechanism would ensure a more rigorous examination of patent applications and thereby generates better examination practices. Moreover, it would allow an interested party (generic companies or patient groups etc.) to oppose the application before the patent is granted and similarly post opposition allows any party to oppose a patent application after the grant of patent. This is how it will be helpful for the patients diagnosed with cancer, Hepatitis C, and rare diseases whose treatment is a far cry for such people because of their high pricing.

With respect to India patent scenario, the following shows the patent trends between 2012-2017 ( Here):- 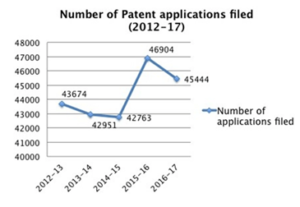 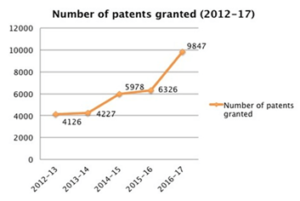 The grant of patent connotes monopoly over the patented subject matter and if it is granted so easily without applying firm standards and tests, it would not harmonize the purpose of IP law. The objective of IP law is to provide incentives to create and serve the interests of the public by promoting economic growth. Interestingly, in pharmaceutical sector, the rigorous application of patentability standards becomes more important because the production of medicines depends upon them. Thus, their direct nexus with the public health which constitutes a part of public interest cannot be overlooked. So if the ever greening strategies which ultimately extends the monopoly time, are not curbed, the result will be unaffordable high prices of the medicines and delay in the entrance of generic drugs in the market. High pricing of the medicine are accessible to only a limited number of people who are rich but the large segment of the people who cannot afford such high pricing medicines have to suffer by relying on their fate. Thus, the role of patentability standards is very significant in the pharmaceutical sectors.

ARTICLE TAGS
India Food, Drugs, Healthcare, Life Sciences Food and Drugs Law Intellectual Property Patent
POPULAR ARTICLES ON: Intellectual Property from India
IP Case Compilation 2019
LexOrbis
Judgement: The Delhi High court granted a permanent injunction in favour of the plaintiff, Hennes & Mauritz, thus securing the rights of a foreign company in their trade mark against the rights
Patenting AI Inventions: Best Practices From Around The World
Obhan & Associates
Artificial Intelligence (AI) is changing the way we live and engage with the world. Besides smart devices (phones, speakers), ...
Patent Application Refused On Obviousness Ground
Khurana and Khurana
A recent case of opposition before the Indian Patent Office highlights the importance of an inventive step.
Intermediary Liability Under Indian Copyright Law: A New Take
Sujata Chaudhri IP Attorneys
On September 27, 2019, after a court-room battle of eight (8) long years, Suneel Darshan, a producer and director in the Indian movie industry, also known for movies like Andaaz and Barsaat, emerged victorious.
Should The Works Created By Artificial Intelligence Machine Be Protected Under The Copyright Law?
Khurana and Khurana
Then came the artificial intelligence systems that brought about a storm in the world of intellectual property law. Since the year 2010 artificial intelligence has developed by tremendous speed.
Compulsory Licensing In India
Khurana and Khurana
WIPO defines patent as an exclusive right granted for an invention, which is a product or a process that provides, in general, a new way of doing something, or offers a new technical solution to a problem
FREE News Alerts
Sign Up for our free News Alerts - All the latest articles on your chosen topics condensed into a free bi-weekly email.
Register For News Alerts
Article Tags
India Food, Drugs, Healthcare, Life Sciences Food and Drugs Law Intellectual Property Patent
Similar Articles
Powered by mondaq AI
MATCH
66%
The Dichotomy Of IPR Protection And Social Welfare- An Analysis Of The Indian Patents Act With Respect To The Pharmaceutical Industry Khurana and Khurana
74%
To Patent, Or Not To Patent, That Is The Question Khurana and Khurana
79%
Patent Linkage And Indian Laws LexOrbis
75%
Patents And The Indian Pharmaceutical Industry Nishith Desai Associates
69%
Emerging Role Of Differentiated Products In Pharmaceutical Industry Obhan & Associates
Related Articles
Future Of E-Cigarette Patent Applications In India After The Nationwide Ban On E-Cigarettes LexOrbis
Pre-Grant Opposition Filed Against Indian Patent Application No. 201721030943 Dismissed Khurana and Khurana
Hindustan Unilever Wins Patent Battle Against Tata Chemicals Limited Khurana and Khurana
Physical Copy Doctrine Versus The "Substantiality" Dictum Khurana and Khurana
Reverse Payments: Shadowing Patent Term Expiry! LexOrbis
Comparative Guides
FinTech
International Arbitration
Labour and Employment
Merger Control
Patents
Mondaq Advice Centres
India
Arbitration, Litigation and Conciliation
India
Trademarks
Global
Investment Immigration
Global
Trademarks in SAARC Countries
More MACs