In recent years, the issue of corporate governance in India has been a hot topic of discussion. As India Inc. has grown by leaps and bounds, corporate India's attention has evolved from simple 'management' to 'governance', and now 'effective governance'. Given the unique challenges that India Inc. faces due to the predominance of family run businesses, there is a pressing need to move from the 'Raja' and 'Praja' model of governance (wherein the self-interests of the promoter family precedes the interests of other stakeholders) to the 'Custodian' model of governance (which is designed to serve the interests of all stakeholders). While some promoters have consciously worked hard to establish a "Ram Rajya" (a democratic-righteous rule), many are still reluctant to yield power and fear that it may lead to an abdication of their throne.

In June 2017, Securities and Exchange Board of India (SEBI), constituted a high powered committee under the chairmanship of Mr. Uday Kotak (Kotak Committee) with the aim of improving governance standards of Indian listed companies which came out with detailed recommendations (Kotak Report)1. The legal experts on the Kotak Committee included our Firm's Managing Partner, Mr. Cyril Shroff.

The Kotak Committee suggested numerous amendments to the SEBI (Listing Obligations and Disclosure Requirements) Regulations, 2015, which will consequently impact all listed entities. In this article, we dissect some of the critical proposals and their impact on Indian Promoters. For a full list of recommendations accepted by SEBI, please refer to the press release2.

Ceiling on maximum number of Directorships

Multiple directorships often leads to a director not being able to devote sufficient time to a particular company. While this may cause practical difficulties in the short run, it will reduce the 'step child' treatment meted out by directors to certain companies.

Separation of 'C' from 'MD'

With effect from April 1st, 2020, top 500 listed companies can no longer have the same individual as the chairperson as well as the MD / Chief Executive Officer (CEO). There may be a further requirement from April 1st, 2022 which stipulates that only a non-executive director can be appointed as a chairperson.

The separation of role of the chairperson and the MD / CEO will hopefully bring about a higher level of involvement of the MD in day-to-day affairs of the company as they will no longer be precariously juggling two extremely demanding roles. However, this may impose a risk of conflict by creating twin power centers.

Compulsory to have a woman independent director

SEBI had previously made it compulsory for all boards to have at least 1 woman director. This move is a step further, as appointment of a woman 'independent' director will curtail the 'check the box' approach of placing a female family member in the board room.

Minimum 6 directors on a board

Boards of top 1,000 listed companies by April 1st, 2019 and top 2,000 by April 1st, 2020 will be required to comprise of at least 6 directors instead of the current minimum requirement of 3 directors.

Whilst having more directors will enable the board to discharge its duties in a robust manner, boards with even directorships may face frequent dead lock situations.

Quorum for Board Meetings

All listed companies will now be required to disclose in their annual report a matrix setting out the competencies that it 'believes' its directors should possess and the skill set that each director 'actually' possesses and additionally, from March 2020, disclose their names in the matrix.

While this may ensure constitution of a wholesome board, India Inc. has seen a great many examples wherein individuals with lesser qualifications have brought significant value addition to the board.

From 1st April 2018, payments made to related parties on account of brand usage or royalty which are higher than and exceed 2% of consolidated turnover will require shareholders' approval. 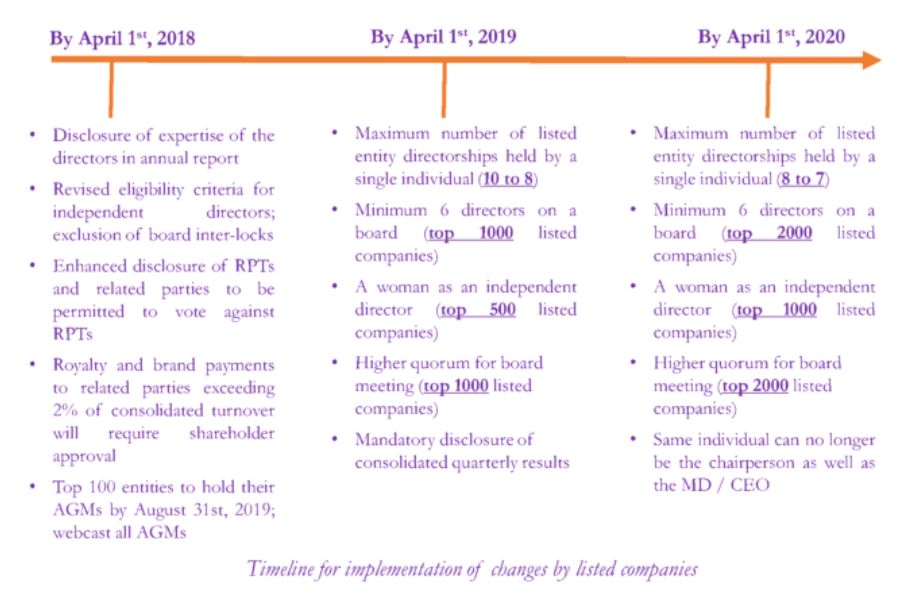 What does all this mean for corporate governance in India?

The changes brought about by the recommendations of Kotak Committee will keep naughty promoters in check, and will protect the interests of the weaker "Praja" of the corporate world. Whilst their implementation could pose immediate practical challenges for some listed entities and an increased cost of compliance, it will ensure better utilisation of the time of promoters and establish sound governance systems across all listed companies. True democracy will finally be institutionalized in India Inc.