The Competition Ordinance was enacted on 14 June 2012 as a general and cross-sector competition law to curb anti-competitive conduct and will come into full effect on 14 December 2015.

What is the First Conduct Rule?

The First Conduct Rule1 concerns agreements, decisions and concerted practices among undertakings which have the object or effect of preventing, restricting or distorting competition in Hong Kong. It applies to both horizontal and vertical agreements, and even if the impugned conduct occurs outside Hong Kong or if any party to the conduct is outside Hong Kong.

A flowchart illustrating how the First Conduct Rule works is set out in Appendix 1.

Where the Competition Commission has reasonable cause to believe that a contravention of the First Conduct Rule has occurred, in general, it must issue a warning notice to the undertaking concerned before bringing proceedings in the Competition Tribunal.

However, this procedure may be bypassed in cases of serious anti-competitive conduct (Serious Anti-Competitive Conduct), which is defined as " conduct that consists of any of the following or any combination of the following:

a) fixing, maintaining, increasing or controlling the price for the supply of goods or services (i.e., price fixing);

b) allocating sales, territories, customers or markets for the production or supply of goods or services (i.e., market sharing);

Further, the general exclusion for agreements of lesser significance3 does not apply to cases of Serious Anti-Competitive Conduct.

Exclusions and exemptions from the First Conduct Rule

The First Conduct Rule does not apply to statutory bodies unless they are specifically brought within the scope of this Rule, nor does it apply to persons or activities specified in a regulation made by the Chief Executive in Council.

Further, schedule 1 to the Competition Ordinance sets out the following general exclusions in respect of the First Conduct Rule:

i) agreements of lesser significance.

The imminent implementation of the Competition Ordinance is a significant step in the evolution of Hong Kong's fledgling antitrust regime and puts Hong Kong on a similar footing to many other jurisdictions, such as the European Union, the United States and Australia.

Multinational enterprises doing business in Hong Kong can no longer afford to ignore the Special Administrative Region as a jurisdiction that has no competition regime or antitrust enforcement. In the next issue, we will discuss the Second Conduct Rule in greater detail. 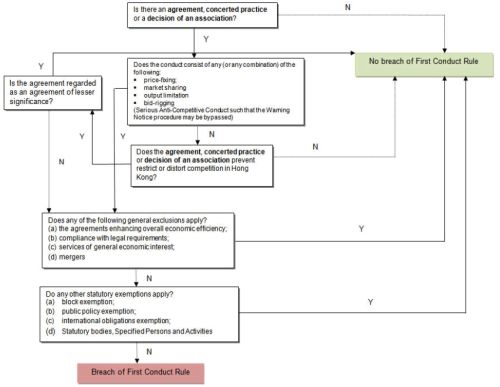 1 Section 6(1) of the Competition Ordinance provides that "an undertaking must not (a) make or give effect to an agreement; (b) engage in a concerted practice; or (c) as a member of an association of undertakings, make or give effect to a decision of the association, if the object or effect of the agreement, concerted practice or decision is to prevent, restrict or distort competition in Hong Kong."

2 Section 2(1) of the Competition Ordinance.