Probiotics are known as "beneficial bacteria" that can be found in, amongst others, dairy products and food supplements. They are defined by the joint FAO/WHO expert consultation on probiotics as "live microorganisms that, when administrated in adequate amounts, confer a health benefit on the host". Since the reference to probiotics implies a health benefit, it comes as no surprise that the statement "contains probiotics" in a commercial communication about a food product constitutes a health claim under the Claims Regulation. Moreover, "contains probiotics", or "prebiotics", is explicitly taken as an example of a health claim in the guidance on the implementation of Regulation 1924/2006 of the European Commission's Standing Committee on the Food Chain and Animal Health. At this moment, no health claims for probiotics have been approved by the European Commission. The Dutch Research institute TNO and the world's first microbe museum Micropia, located in Amsterdam, are nevertheless convinced of the health benefits of probiotics, in particular to protect against antibiotic-associated diarrhea (AAD). At the beginning of this month, they launched a so-called National Guide on clinically proven probiotics for use during antibiotic treatment in the scientific journal BMC Gastroenterology

The National Guide is presented as a tool for healthcare professionals, patients and other consumers to recommend or use the probiotic products listed as scientifically proven to prevent diarrhea caused by the use of antibiotics. While antibiotics fight bacterial pathogens, they also have a disruptive effect on the body's own gut bacteria. One in four adults experiences diarrhea caused by ADD. The National Guide promotes probiotics for their function of protecting the gut flora from the disruptive effects of antibiotic treatment, fostering recovery and reducing the risk of recurring infections.

The research behind the Guide involves a literature study of clinical studies that are all based on randomized, double-blind and placebo-controlled trials. Moreover, all of the trials clearly define AAD and have a probiotic administration regime for a period no shorter than the antibiotic therapy. 32 of the 128 initially identified clinical studies were selected in line with the aforementioned criteria. After the selection and review process, available probiotic products on the Dutch market were listed to be subsequently matched with the formulations as proven effective in the selected clinical studies. Only eight probiotic dairy products and food supplements marketed in the Netherlands specified on their label the respective probiotic strain(s) and number of colony-forming units (CFUs) and could therefore be used in the research. The listed probiotic products were awarded with one (lowest) to three (highest) stars for their proven effect as demonstrated in at least one to three clinical studies. The strain Lactobacillus rhamnosus GG with a minimal daily dose of 2 × 109 CFU was found in at least three clinical studies and therefore awarded with a three-star recommendation. This strain was found in 2 products, both of which are food supplements. Several multi-strain formulations resulted in a one-star recommendation; 5 food supplements and 1 dairy product matched such a formulation. The multi-strain formulation Lactobacillus rhamnosus GG, Lactobacillus acidophilus LA-5 and Bifidobacterium lactis BB-12 was present in two clinical studies and therefore assigned with a two-star recommendation. However, none of the listed probiotic products found on the Dutch market contained this formulation. 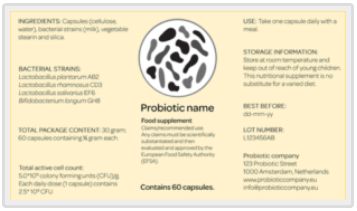 Plea for the labeling of probiotics

The research is not exhaustive as probiotic products other than the eight that were included in the study might also be effective. However, since this was not communicated on the label, they could not be included in the research. To overcome this gap, TNO and Micropia as the initiators of the National Guide call for the labeling of the probiotic strains and number of CFUs on all probiotic products EU-wide. This could also expand the potential of the Guide. At this moment, strain and CFU labeling of probiotic products is not legally mandatory under the Food Information for Consumer Regulation. The initiators also developed a special probiotic label to address this claimed deficiency. The label is based on the probiotic label used in the US as created by the International Scientific Association for Probiotics and Prebiotics (ISAPP). The labels are in line with the information that should be demonstrated on probiotic labels according to the FAO/WHO 2002 Working Group on Guidelines for the Evaluation of Probiotics in Food.

National Guide to circumvent limitations under the Claims Regulation?

The Claims Regulation applies to health (and nutrition) claims made in commercial communications of foods to end consumers. This may be in the labeling, presentation or advertising of the food. Besides information on or about the product itself, also general advertising and promotional campaigns such as those supported in whole or in part by public authorities fall within the scope of the Regulation. Moreover, since the Innova Vital case, we know that (science-based) communications made to healthcare professionals may also be regulated by the Claims regulation. The rationale thereof is that the healthcare professional can promote or recommend the food product at issue by passing the information on to the patient as end consumer. Only non-commercial communications, such as publications that are shared in a purely scientific context, are excluded from the Regulation.

It must be noted that the National Guide is, unlike health claims, not a commercial communication originating from food business operators. This does, however, not necessarily mean that food business operators are free to use the science-based Guide in their communication with (potential) consumers or even with healthcare professionals without any reservation. The Guide, which not only lists the probiotic formulations that are beneficial for the human gut flora, but even the names of products that contain those formulations, could turn commercial when referred to by a food business. Moreover, when shared in such a context, the claims made in the National Guide may even enter the medical domain due to the preventive function assigned to foods containing probiotics.

The history of probiotic health claim applications has shown that EFSA is not easily convinced of the evidence that is correspondingly provided. The National Guide is, however, not subject to approval from the European Commission, backed by a positive opinion from EFSA. The Guide's publication in the peer-reviewed journal BMC Gastroenterology nevertheless contributes to the verification of its scientific substantiation. The Guide therefore appears as an innovative, science-based alternative for probiotic health claims. At the same time, food business operators should be careful in referring to the National Guide to not act beyond the borders of the Claims Regulation and to stay away from medical claims. As a very minimum however, it seems to be valuable work to be adopted by branch organizations or research exchange platforms, such as the International Probiotics Association.

ARTICLE TAGS
Netherlands Food, Drugs, Healthcare, Life Sciences Food and Drugs Law Healthcare
POPULAR ARTICLES ON: Food, Drugs, Healthcare, Life Sciences from Netherlands
Pet Food Recalls: Here To Stay
Shoosmiths
Since April 2021, over 278 cases of feline pancytopenia, approximately 130 of which have proved fatal, have been detected amongst the UK's feline population.
Protecting The Protectors: Calls For Emergency Legislation To Prevent The Prosecution Of Healthcare Professionals When Treating COVID-19 Patients
BCL Solicitors LLP
UK healthcare organisations have written to the Secretary of State for Health and Social Care, pushing for the introduction of emergency legislation to protect healthcare professionals...
MHRA Delivery Plan 2021-2023: ‘A New Era In Regulation'
Hill Dickinson
Advising on UK medical device regulation can currently be frustrating due to the uncertainties surrounding the regulatory regime. While the EU get used to the new Regulations...
Report Released On The Safety Of Maternity Services In England
Hill Dickinson
The Health and Social Care Committee's report on the safety of maternity services in England makes recommendations in respect of funding, learning and clinical negligence claims arising out of maternity care.
The General Medical Council's Fitness To Practise Procedures: How The Process Will Unfold, What To Do, And When
BCL Solicitors LLP
For any doctor, being the subject of a complaint can cause great stress and anxiety. When an allegation results in a formal investigation by the General Medical Council (GMC), the process that...
Evidence – The Basis Of Admissibility
RadcliffesLeBrasseur
The rules of evidence have become gradually more relaxed over the decades. Complex rules such as the hearsay rule and its even more complicated exceptions are no longer directly applicable...
FREE News Alerts
Sign Up for our free News Alerts - All the latest articles on your chosen topics condensed into a free bi-weekly email.
Register For News Alerts
Article Tags
Netherlands Food, Drugs, Healthcare, Life Sciences Food and Drugs Law Healthcare
Related Articles
Medical Devices Regulation (MDR) Entered Into Effect Loyens & Loeff
Regulatory Pathways For Clean Meat In The EU And The US – Differences & Analogies Axon Lawyers
Food Choice Logos Under Full Development Global Advertising Lawyers Alliance (GALA)
Cannabis Derived Food Products – What's The Current State Of Play? Axon Lawyers
De mogelijkheden tot het opnemen van palliatief verlof en rouwverlof naar huidig Nederlands recht Hogan Lovells
Mondaq Webinars
Reshaping Strategies for Wealth Management in the Post-Pandemic Economy
Wedlake Bell
Webinar London UK
Wealth Management: The Impact of Recent Economic Trends and Suggested Solutions
Dixcart Group Limited
Webinar Surrey UK
More Webinars
Comparative Guides
FinTech
International Arbitration
Labour and Employment
More Guides
Mondaq Advice Centres
Global
Trademarks in SAARC Countries
More MACs
Upcoming Events
Mondaq Social Media