This decision relates to a European patent application for a system and method that enables users without any skills specific to 3D software to edit 3D content.  Here are the practical takeaways from the decision T 2448/16 () of 25.6.2021 of Technical Board of Appeal 3.4.03:

The cognitive meaning of providing/storing language information as well as adjusting, placing and generating an image do not have any non-obvious technical implication for the functioning of the computer device and its interactive graphical user interface (GUI). The underlying technical operation can be carried out by any conventional computer.

The application relates to positioning a consumable in a 3D simulation, e.g. of a virtual room. A consumable may be an image, a video, a text or any kind of software element. It takes trial and error to position a single 3D consumable. This is difficult because there are six variables that must simultaneously be adjusted (x, y, z, thetax, thetay, and thetaz). Therefore creating a great amount of content in a short period of time is impractical. It is an object of the invention to provide a system for placing content in a 3D environment onto a 2D picture wherein the user does not need to be intimately familiar with 3D tools. The invention proposes hardware and a graphical user interface (GUI) with different tools, e.g. a projection matrix, for placing and adjusting the consumable via a "drag and drop" operation. 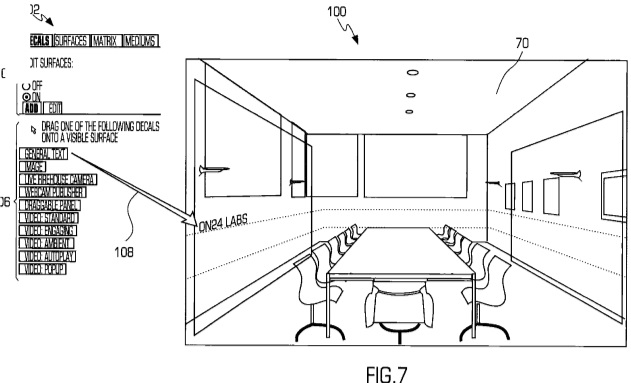 (A) A system for generating an application, comprising:

(B) a computer system that executes a construction tool that is used by a technical user and a business user to generate an application in a three dimensional environment;

(D) wherein the repository further comprises a consumable object for each piece of content,

(G) an application run-time platform executed on a computer system that runs the application in the three dimensional environment;

(K) and an authoring component that places one or more software consumables onto the three-dimensional image,

(M) such that the one or more software consumables maintain perspective relative to the three dimensional image.

The Board in general agrees with the reasoning of the Examining Division that many of the features (A)-(M) of system claim 1 relate to non-technical features where technical character only arises because a general purpose computer system is claimed in order to automate the method steps.

3.1.2 The cognitive meaning of providing/storing language information as well as adjusting, placing and generating an image do not have any non-obvious technical implication for the functioning of the computer device and its interactive graphical user interface (GUI). The underlying technical operation can be carried out by any conventional computer (see Fig. 1 of the application).

3.1.3 Furthermore, the method steps are mainly of administrative nature and neither the claim nor the application as a whole describe any technical interaction between these steps and the technical features which would go beyond the mere automation of the steps relating to administration (see  T 641/00, G 3/08, G 1/19, "Case Law of the Boars of Appeal", 9th edition, I.D.9.1.2- I.D.9.1.4).

For the problem-and-solution approach, D1 (US 6 628 279) was considered as the closest prior art, because it discloses a 2D image of a 3D object. Additional 2D/3D objects can be placed in a 3D environment.

According to the Board, D1 does not disclose features (E) to (F).

3.3.8 Therefore, the Board is of the opinion that the term "projection matrix" of claim 1 refers to the well-known fundamental mathematical concept of construing 3D objects based on a 3D matrix. The matrix goes in general in perspective view to a single point in infinity such that all objects maintain perspective relative to the 3D image. This concept is known in painting since several hundreds of years. An equivalent concept is used in D1 in order to construe a 3D representation of a house in a 3D coordinate system maintaining perspective relative to the 3D image (feature (M)). The 3D coordinate system, the coordinates of the house/consumables and the grid forming the structure of the house/consumables in D1 therefore can be considered as a "projection matrix". D1 therefore discloses features (I) to (J) and (M).

In the end, only features (E)/(F) were considered as the distinguishing features, which were found obvious by the Board:

These features have the effect that the language of the CAD software and specific consumables can easily be changed.

3.6.1 As to features (E)/(F) the description of the present application does not provide any specific detail, effect or technical problem solved. Fig. 25 of D1 shows a standard PC. Such PCs require a standard operating system. The operating language of any operating system (Windows, iOS, etc.) and applications can in general be changed in the options.

3.6.3 Therefor the Board is of the opinion that the subject-matter of the Main Request does not involve an inventive step within the meaning of Article 56 EPC.

Therefore, the Board concluded that the subject-matter of claim 1 does not involve an inventive step (Article 56 EPC). The appeal was thus dismissed.