This decision relates to an European patent application for an interactive food and/or drink ordering system and method.  Here are the practical takeaways from the decision T 2251/13 (Projection surface with built-in track pad/ORDAMO) of 13.4.2021 of Technical Board of Appeal 3.5.01:

The invention concerns an interactive food and/or drink ordering system in a restaurant. The main idea is to project a menu onto the restaurant table (Figure 1). The table has a built-in track pad allowing the guest to select and order food and/or drinks from the menu. 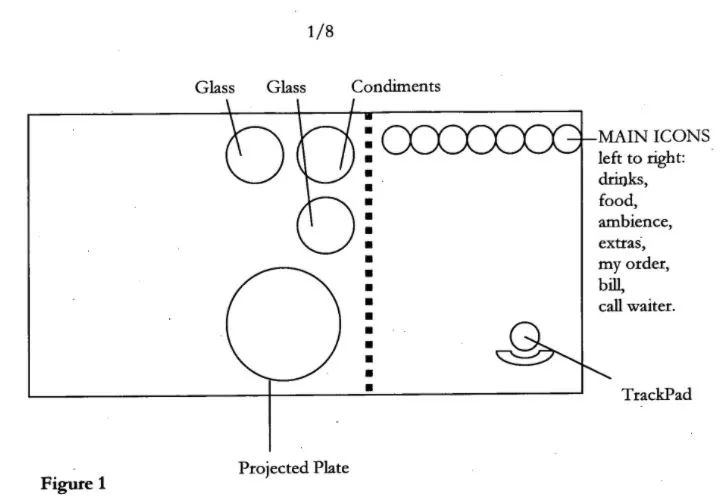 The system comprises a projector that is mounted above the table and connected to a computer (Figure 15). Also the track pad is connected to the computer via a short range wireless network such as Bluetooth. 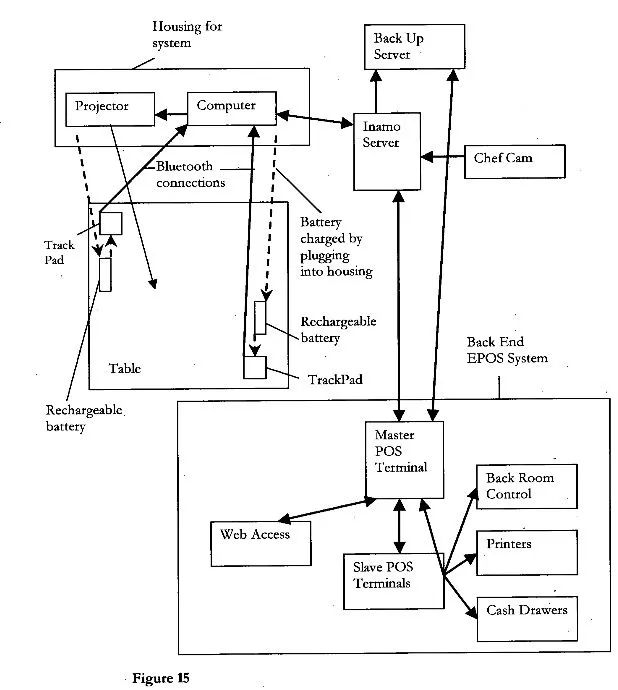 Here is how the invention was defined in claim 1 in the final request during the oral proceedings:

Initially, the Board of Appeal agreed with the Examining Board that the subject-matter of (old) claim 1 lacked of inventive step (Article 56 EPC) in view of D1 (US 2005/273345) in combination with D3 (Ammer A: "Projector-Camera System for Flexible Interactive Projections", 2005, Stockholm University, Stockholm, Sweden, XP002470986).

The appellant did a good job convincing the Board of Appeal and could submit a new main request with amended claim 1 during the oral proceeding.

3.1 The examining division assessed inventive step starting from D1 which relates to a food and drink ordering system comprising a computer terminal.

In the Board's view, however, D3 is a better starting point because it is related to a projector-camera system for interactive projections, which is technically closer to the claimed invention. In other words, D3 requires fewer technical modifications to arrive at the subject-matter of the claims.

D3 explicitly mentions in paragraph 1.1 on page 2 that the projector-camera system may be used on a restaurant table to show the menu. However, even without this, D3 would be a good starting point, because the use of the projector-camera system in a restaurant to show the menu is a non-technical aim which does not contribute to inventive step under the "Comvik approach" (see T 641/00 - Two identities/COMVIK). Therefore, it is irrelevant whether or not this is disclosed in the prior art. What counts is the technical disclosure.

3.2 It is common ground that the invention in claim 1 differs from D3 by (i) the ordering of food and/or drinks from the menu, and (ii) a track pad that is "built into the [projection] surface".

In D3, the user interacts with the system by using his fingers (paragraph 3.1 on page 8). The system makes use of a fingertip finding algorithm (paragraph 4.1) to identify the user's interaction.

3.3 In its preliminary opinion, the Board considered that the ordering of food and drinks (i) constituted an obvious implementation of a non-technical requirement. The appellant did not contest this. Instead, the feature that was given patentable weight was the second one (ii), namely the built-in track pad.

3.4 The appellant argued that the built-in track pad provided a clearer projection surface, because the projected image was not obstructed by the user's hand as in D3 (see Figure 7).

The Board is not convinced that the invention has this effect, because claim 1 does not exclude that the track pad covers parts of the projection area. Furthermore, a fingertip interface could be designed such that the user points at projected buttons or the like which do not contain any information. Therefore, the Board does not see that the built-in track pad has any technical effect beyond providing an alternative to the fingertip interface in D3.

3.5 The question that remains to be answered is whether this would have been an obvious alternative. The fact that the problem is formulated as "how to provide an alternative" does not automatically mean that the solution is obvious. Also the fact that the alternative, here a track pad, was well known per se is not enough. There has to be some hint or incentive, in the prior art, or in the skilled person's common general knowledge, to provide the alternative.

3.6 In fact, the invention is not merely the use of a track pad as an input device. It involves building the track pad into a table top or a similar surface that is used as a projection surface. Although, as the examining division pointed out, there is no detailed implementation of this feature, the Board judges that "built into" implies at least that the device forms an integral part of the table top structure.

The examining division considered that this was a "straightforward constructional detail". However, they did not refer to any prior art that disclosed such a built-in interface. Nor can this be said to be common knowledge.

3.7 At the oral proceedings it was discussed whether the idea of building something into a surface, e.g. to make it more permanent or less obtrusive, could be a routine design skill and part of the skilled person's "mental furniture", discussed for example in decision T 190/03 - Multiple subtitles/EDICO at point 16.

Although this seems plausible, in the end the Board judges that on balance this is not the case. The required amendment and design skill is in the field of mechanics. However, the skilled person in this case is a specialist in computer  systems who would not necessarily have these routine design skills and would not have considered modifying a table top structure in order to provide an alternative input interface without a further hint.

Therefore, claim 1 was considered to involve an inventive step. At the end, the case was remitted to the Examining Board to grant a patent.