A bill proposing changes that will bring the Dutch Financial Markets Supervision Act (Wft) in line with the banking supervision structure resulting from the Single Supervisory Mechanism (SSM) Regulation has been submitted to Parliament. The SSM Regulation introduces the Single Supervisory Mechanism, composed of the European Central Bank (ECB) and the national competent authorities (NCAs) of the member states participating in the SSM. The SSM Framework Regulation details how the ECB and NCAs should cooperate.

Under the SSM, the ECB will supervise "significant banks" as of 4 November 2014. The bill is important for non-significant banks as well, since it clarifies the allocation of supervisory authorities and the cooperation between the relevant supervisors, as well as the procedures regarding the granting of licences and passport notification. Also, the bill provides for assistance by NCA-appointed persons to the new ECB on-site inspection teams. In addition, the time DNB will have for the handling of the application for banking licences will be doubled, in principle, to 26 weeks.

The bill proposes changes to the Wft with regard to:

Granting, withdrawal and amendment of licences
Under the SSM, only the ECB is authorised to grant, withdraw, or amend licences to banks that have their seat in the Netherlands, regardless of whether a bank is significant or non-significant. However, the relevant decisions will be prepared by the Dutch Central Bank (DNB) as the NCA. The bill proposes to allow DNB 26 weeks to prepare the draft licensing decision, which is double the current time allowed. The ECB will then in principle have 10 business days to support or object to the draft licensing decision. If the applicant has not shown that the licence requirements are met, DNB will reject the application, in which case no draft decision needs to be notified to the ECB.

When DNB prepares a draft decision for the withdrawal or amendment of a licence, it is the ECB that takes the final decision. The ECB also has the authority to withdraw or amend a licence on its own initiative. Prior to exercising this authority, the ECB consults with DNB. DNB remains the competent authority for licensing "opt-in banks", as these banks fall outside the scope of the SSM Regulation.

Declaration of no objection for qualifying holdings
The ECB is also the sole competent authority for the granting of declarations of no objection (DNO) required upon the acquisition of a qualifying holding in a bank, regardless of whether it is significant or non-significant. Similarly, DNB prepares a draft decision regarding the granting of a DNO. Again, it is the ECB that takes the final decision. Unlike the decision to reject an application for a licence however, DNB has no authority to reject a DNO application. For the timing regarding the application of a DNO for qualifying holdings, see the  timeline below. 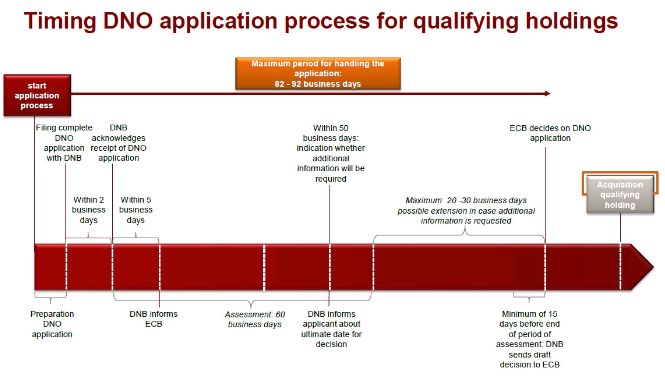 Establishing a branch office and provision of cross-border services
Under the SSM, DNB is no longer authorised to impose additional conditions on a bank from a participating member state that wishes to establish a branch office in the Netherlands, or that wishes to provide cross-border services into the Netherlands. A bank is allowed to establish a branch office, unless the NCA of the member state where the bank has its seat decides against it within two months of notification. With regard to significant banks, it is not the NCA but the ECB that decides within two months of notification.

Cooperation between DNB and ECB
The SSM requires DNB to cooperate with the ECB. The ECB can request assistance from DNB with regard to the preparation or execution of its assigned tasks. For example, DNB has to provide assistance to the ECB when the latter requests an on-site inspection. The bill indicates which officials are authorised to provide this assistance and proposes granting these officials the required powers under Dutch administrative law. The bill also proposes assigning powers regarding the sealing of business premises, books and other records.

Cooperation between AFM and DNB / ECB
In the Dutch "twin-peaks" model, two supervisory authorities, one tasked with prudential supervision, DNB, and one tasked with market conduct supervision, the Autoriteit Financiële Markten (AFM), work together closely. To ensure that this cooperation can be maintained under the SSM Regulation, the bill sets out the corresponding procedures. For example, where previously the AFM was consulted by DNB prior to deciding on granting a licence, DNB will now have to consult with the AFM prior to notifying the ECB of a draft authorisation decision. The same applies when preparing a draft decision regarding a DNO. However, where the AFM used to consult DNB prior to granting a licence to certain investment firms (for example, investment firms that are subsidiaries of a bank or of a holding company of a bank), it will now have to consult with the ECB. Similarly, if the AFM makes an observation regarding the reliability or suitability of directors of significant banks, it will have to share this observation with the ECB, not DNB.

The bill provides that banks that have obtained a licence from DNB prior to the SSM Regulation coming into force will be considered to have a licence in accordance with this regulation. No transitional law is required, as the bill merely proposes amendments to bring the Wft in line with a regulation that has direct effect.

For a brief overview of the SSM Framework Regulation and which banks are regarded significant, see our previous In context article.

ARTICLE TAGS
Netherlands Finance and Banking Capital Adequacy/BASEL Financial Services
POPULAR ARTICLES ON: Finance and Banking from Netherlands
European Commission Publishes Proposals To Amend UCITS And AIFMD Frameworks
Dillon Eustace
For further information on any of the issues discussed in this publication please contact the related contact(s) on this page.
AIFMD Review - Fine-Tuning Of The AIFMD Framework And Targeted Harmonisation With The UCITS Framework
Arendt & Medernach
In light of the growing role of alternative investment funds (AIFs) as financial intermediaries and further developments in the market since the AIFMD came into force in 2011, ...
The ESG Journey: A Roadmap To Sustainable Finance
Winckworth Sherwood
Greening Finance: a Roadmap to Sustainable Investing", the UK government's new policy paper from HM Treasury, has arrived...
Everything You Need To Know On Luxembourg Investment Funds
Loyens & Loeff
From the regulatory and tax environment to the fund formation, get a comprehensive overview of the Luxembourg investment funds market.
10 Tips For The Perfect DDQ
MJ Hudson
The Due Diligence Questionnaire (DDQ) is a key item in the suite of due diligence materials that most, if not all, private markets fund managers will need to prepare when raising a fund.
Guernsey Investment Funds Market Update: Expansion Of Economic Substance Requirements To Partnerships And Revision Of Finance Laws
Carey Olsen
Our investment funds team outline the latest developments in the investment funds market in Guernsey including the expansion of economic substance requirements to partnerships and the introduction of revised investment and ...
FREE News Alerts
Sign Up for our free News Alerts - All the latest articles on your chosen topics condensed into a free bi-weekly email.
Register For News Alerts
Article Tags
Netherlands Finance and Banking Capital Adequacy/BASEL Financial Services
Related Articles
Update: Dutch Implementation Of Investment Firm Directive Loyens & Loeff
No Dutch Recovery And Resilience Plan (Yet) Bird & Bird
Legislative Proposal New Dutch Entity Tax Classification Rules Postponed And FGR No Longer Part Of This Proposal Loyens & Loeff
The Global Islamic Finance Market: Part 1, Sukuk Bonds TMF Group BV
The Use Of Dutch Foundations In International Capital Markets Structures Maples Group
Mondaq Webinars
What Can Be Achieved in Luxembourg in Terms of Securing Assets in Pre-Trial, Pre-Enforcement Situations?
Bonn Steichen & Partners
Webinar Luxembourg Luxembourg
Hot Topics in Fund Finance [REPLAY]
Cadwalader, Wickersham & Taft LLP
Webinar New York United States
More Webinars
Comparative Guides
FinTech
International Arbitration
Labour and Employment
More Guides
Mondaq Advice Centres
Global
Trademarks in SAARC Countries
More MACs