Vietnam: Vietnam's Competitive Minimum Wages: How Does It Fare With Its Regional Peers?

One of Vietnam's advantages making it a preferred destination for investors is its competitive minimum wages as compared to other countries in the region.

Vietnam's minimum wages are governed by the National Assembly and reflect the socio-economic development of the country, allowing workers to cover their basic needs.

In addition, salaries that are paid to employees who have vocational training must be paid at least 7 percent higher than the minimum salary level.

How does Vietnam compare with other countries? 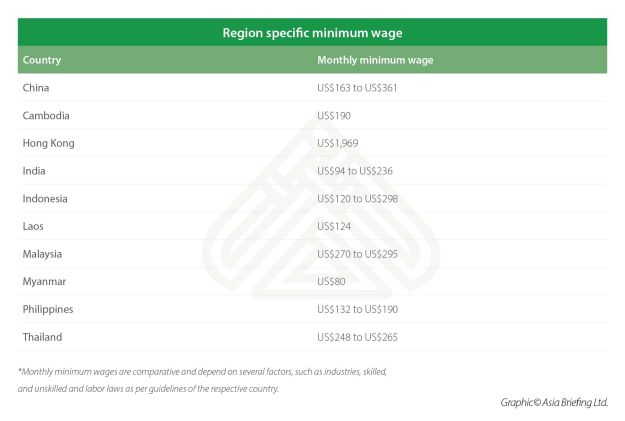 Indonesia with also a lower starting minimum wage suffers from low worker productivity, with less than half of its country's workforce classified as skilled. While not only affecting Indonesia, a large part of the country's working population seek jobs in its capital Jakarta due to the centralization of economic growth.

India, on the other hand, has lower starting wages than Vietnam but its business environment is mired in red tape and bureaucracy. It is also farther from China and has a frosty relationship with the country.

For investors looking to move operations away from China, or diversify their presence in Asia, moving to Vietnam makes sense – it borders China and thereby offers business owners better access to established regional supply chain networks, not to mention lower relocation costs.

Wage increases often lead to an increase in consumer spending and consumption. However, as Vietnam grows its economy and wages see a rise, it will have to maintain a balance between inflation, wage levels, and productivity to avoid disrupting the overall labor market.

Low labor costs ultimately are not sustainable in the long-term and the focus will have to be on developing Vietnam's service industry, high-tech industries, and domestic consumption. However, a very high minimum wage may reduce formal employment and deter FDI in Vietnam. It may also lead to investors going to neighboring countries, such as Cambodia and Indonesia, to save costs.

It is inevitable that wages will grow; however, in the short to medium term, Vietnam can be expected to prioritize a balance in growth to capitalize on regional investments and invest in expanding domestic industrial and services infrastructure and capability. A combination of these would be necessary if the country were to improve the living standards for its population.