In 2009, Shanghai issued a now famous policy notice (Circular No. 38) stating that foreigners working in Shanghai "may"  contribute to the social security scheme in China. This is the first time that foreigners could start contributing, but it was not mandated. Then in 2011, a national law was passed stating that all employers and employees – including foreigners – must contribute to the social security scheme in China (contributions to the housing fund remain voluntary for foreign nationals). But while national law trumps local policies and the rest of China made contributions mandatory for foreigners, Shanghai decided not  to enforce this: the Shanghai authorities continued to regard contributions by foreigners as voluntarily based on the Circular No. 38. This notice was extended in 2016, but finally Circular No. 38 was left to expire on 15 August 2021.

What does this mean?

Unfortunately, there are still a lot of unknowns, but some facts are clear:

Until now, the social security bureau has not taken any initiative to look into contributions to social insurance for foreigners in Shanghai unless a specific complaint was made to the bureau. Historically, complaints mostly occurred when foreign employees wished to contribute but the employer refused. The social security bureau generally would side with the employee and contributions would have to be made from the starting date of the employment contract.

In verbal discussions with a number of social security officers, however, we have been confirmed that they have received no new instructions to actively look into foreigners' contributions in Shanghai, and unless such instructions later are given, they will continue to follow the above practice.

Therefore, where Shanghai employers and their foreign employees have agreed not to make contributions, there is basis to decide to continue following current practice, i.e., to not make any contributions. On the other hand, it is important to note there is no guarantee that the social security bureau in Shanghai will not change its position at some point in time; and if so, there is a risk that contributions may have to be made from 15 August 2021 or even from the start of the employment contract (though this seems impractical and therefore may be less likely).

For companies that want to operate conservatively and so decide to start making contributions for their foreign staff, we have outlined the financial impact:

A part of the contributions shall be borne by the employee, though withheld and paid by the company (as with individual income tax, IIT). This means that this personal contribution will decrease the net amount that a foreign employee receives.

The personal contribution is set as a percentage of the monthly gross salary:

Note that the personal contribution is not subject to IIT. Moreover, foreigners that leave China can have the majority part of the contributions that they have made paid out in a lump-sum. So, this part is not "lost".

When making the decision on whether or not to contribute to the housing fund scheme, one consideration could be that this amount is not subject to IIT, and that every quarter an amount of up to CNY 7,500 (current amount valid for foreigners in Shanghai) can be withdrawn and used to pay rent and rent-related expenses.

The employer part is calculated as a percentage of the monthly gross salary, and paid on top of that salary. The part contributed by the employer is paid into the social insurance system and is therefore a sunk cost. So this contribution will increase the company's cost of the employment, without any direct benefit to either the employer or the employee.

In Shanghai, it is currently optional for employers to contribute the maternity and workplace parts of the social security insurances for their foreign employees. Whether this practice continues remains to be seen.

China so far has signed bilateral agreements with the below 11 countries, which allow for exemptions for certain contributions if relevant conditions are met. The principle is that a national of one of these countries should not have to make contributions to similar schemes in both China and at home. And so, if they continue to make relevant social insurance contributions in their home country, then they (and their employers) can be exempt from doing so in China. 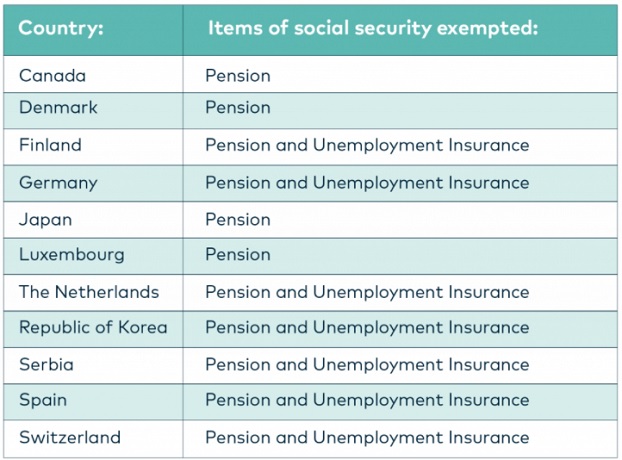 Our professional payroll team is happy to provide further advice on whether your company should contribute social insurance for Foreigners in Shanghai and how to implement the bilateral agreements.

Acclime is a corporate service firm, which provides a full range of services including  custodian of stamps and licenses, treasury, payroll, and accounting + tax filing assistance.  We focus on compliance and advice when dealing with irregularities, and representing clients in discussions and negotiations with the authorities. For more information, please contact us, email Ms. Ann Sophie de Meester, or connect with your usual contact at Acclime.