China: The Application Of Article 9 (Capital Gain) Under The MLI To Covered Tax Agreements (Part III)

by Alfred Chan
China Tax & Investment Consultants Ltd
0 Liked this Article
To print this article, all you need is to be registered or login on Mondaq.com.

Paragraph 1 of Article 9 of the MLI - Capital Gains from Alienation of Shares or Interests of Entities Deriving their Value Principally from Immovable Property - addresses situations in which assets are contributed to an entity shortly before the sale of shares or comparable interests (such as interests in a partnership or trust) in that entity in order to dilute the proportion of the value of the entity that is derived from immovable property. [1]

Further, Article 9(4) provides an optional provision that offers an alternative way to address the particular BEPS issue that is dealt with in Article 9(1). Article 9(8) provides some rules for its application:

Each Party that chooses to apply paragraph 4 (of Article 9) shall notify the Depositary of its choice. Paragraph 4 shall apply to a CTA only where all contracting jurisdictions have made such a notification. In such case, paragraph 1 shall not apply with respect to that CTA.

As the following table shows, a Signatory or Party [2] to the Convention can choose to apply paragraph 4 either in addition to or to the exclusion of paragraph 1.

In respect of New Zealand's CTAs, some of them contain a specified value threshold in shares or comparable interest in the land-rich entity but do not contain the 365-day testing period as required under Article 9(1)(a). Out of a total of 37 CTAs, 23 of the New Zealand CTAs do not satisfy the requirement for Article 9(1)(a), including the tax treaties with Australia, Austria, Ireland, Japan and Sweden. These 23 CTAs, in respect of which no reservations are made under Article 9(6)(a), will be subject to modification by the compatibility clause under paragraph 9(2). That is, the provision of the 365-day testing period shall apply in the absence of such a testing period. That is, it will be added to those CTAs.

Alternative provisions are introduced to update the CTAs that, concluded decades ago, do not follow the newest version of the Model Tax Convention. For that reason, some of the New Zealand CTAs do not meet the 365-day testing period and a specified value threshold for the shares or comparable interest in the land-rich entity. Examples are the New Zealand-Belgium tax treaty and the New Zealand-Korea tax treaty, both of which are now under re-negotiation. New Zealand has covered this group of CTAs by opting in for paragraph 4, which provides for both the 365-day testing period and specified value threshold in shares or comparable interest. The notification under paragraph 8 is not given at the ratification day. But New Zealand can give notification later pursuant to Article 29(6) of the MLI.

A Party to the Convention can choose to apply Article 9(4) either in addition to, or to the exclusion of Article 9(1) to bring them in line with the 2017 update on the OECD Model Tax Convention. 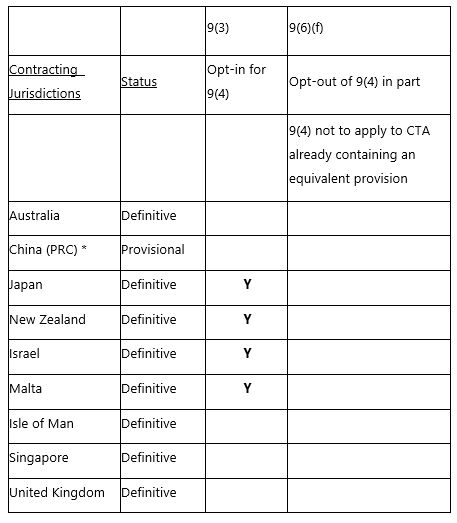 Both Japan and New Zealand choose to apply Article 9(4) of the MLI to their CTAs, in addition to Article 9(1). Both have given notifications to the OECD Depositary pursuant to Article 9(7). Where any contracting jurisdiction opts in for an Article of, or a provision of the Article, of the MLI, it is required to notify the OECD Depositary in order to give the legal effect to the optional provision under the MLI.

Both Japan and Zealand opt in for Article 9(4), and both of the two contracting states have made notification to the Depositary, pursuant to Article 9(8) of the MLI.

The synthesized text of Article 9 of the MLI and the tax treaty provision shall read (with the strikethrough texts replaced):

Pursuant to Article 9(7), the texts of Article 9(4) of the MLI shall replace Article 13(2) of the Japan-New Zealand CTA as the two contracting states have made a matched notification to the Depositary.

New Zealand did not include China in the list of CTAs that it confirmed at the time of deposit of its Instrument of Ratification on 18 June 2018. It is noted that New Zealand recently signed a revised tax treaty with China on 1st April 2019 that provides for both the 365-day holding period and specified value threshold in shares or comparable interest. It is anticipated that New Zealand will give notification to include China into the list of its CTA later pursuant to Article 29(5).

Article 13(4) of the China-New Zealand double tax treaty (signed but not yet effective) contains both the holding period and specified value threshold requirements with respect to the tax treatment of capital gains:

4. Gains derived by a resident of a Contracting State from the alienation of shares or comparable interests, such as interests in a partnership or trust, may be taxed in the other Contracting State if, at any time during the 365 days preceding the alienation, these shares or comparable interests derived more than 50 per cent of their value directly or indirectly from immovable property, as defined in Article 6, situated in that other State

It appears that there is a clash between China's MLI position that provides that China has reserved its right not to apply the holding period to its CTAs, and Article 13(4) of the newly concluded tax treaty. However, by signing a new China-New Zealand tax treaty, the two Parties move a step closer to the object and purpose of the MLI, not away from it. This practice is endorsed by the monitoring system of the Inclusive Framework. In addition, one can refer to Article 30(3) of the Vienna Convention on the Law of Treaties for guidance which provides that the new tax treaty shall prevail over the earlier one. It reads:

The earlier-concluded treaty is the MLI signed on 7 June 2017, which applies to the extent that the provisions of the MLI are compatible with the later treaty signed on 1 April 2019. In this regard, that is the newly concluded treaty between China and New Zealand.

[1] See paragraph 128 of the Explanatory Statement to the MLI.

[2] A Party is a signatory that has deposited to the OECD Depositary the Instrument of Ratification, Acceptance, or Approval.