As the Cayman Islands prepares to update the Caribbean Financial Action Task Force (CFATF) on our improved framework for deterring and detecting money laundering, terrorist financing, and proliferation financing, Government has further strengthened the team of persons who are supporting our efforts.

Mr Jan Tibbling, the Chief Public Prosecutor at the Swedish Economic Crime Authority (SECA), has been seconded to the Cayman Islands' CFATF National Coordination Team to advise Cayman in its CFATF preparations.

He arrived in Cayman on Monday, 26 August, and will assist Cayman through May 2020, said Ms Elisabeth Lees, National Coordinator for Cayman's Anti-Money Laundering Steering Group.

As SECA is the equivalent of Cayman's Office of the Director of Public Prosecutions in the area of financial crime, Mr Tibbling's SECA team deals with financial crime cases including money laundering, tax crimes, and embezzlement. As an international asset recovery expert, he is Sweden's former contact point for asset recovery.

Having represented Sweden at several Financial Action Task Force (FATF) plenaries; and having sat as the law enforcement FATF assessor for Austria, Mr Tibbling is well positioned to advise Cayman in relation to its preparations.

"I am pleased to join the National Coordination Team, and to work with Cayman's broader CFATF response team across the public and private sectors that is fulfilling the Islands' global AML/CFT/PF (anti-money laundering, countering the financing of terrorism, and proliferation financing) commitments," he said.

Ms Lees noted that the FATF, in its April 2017 report on Sweden's AML/CFT/PF regime, had positive words to say about SECA's work.

The current focus for the National Coordination Team, working with Cayman's Anti-Money Laundering Unit (AMLU), is drafting the Islands' First Follow-Up Report. The report will be delivered to the CFATF on Tuesday, 24 September. It will detail our overall progress in meeting the Recommended Actions and technical deficiencies outlined in the CFATF's Mutual Evaluation Report on the Cayman Islands, which was published in March 2019.

The CFATF is one of nine FATF-style regional bodies that combat money laundering, the financing of terrorism and the financing of proliferation of weapons of mass destruction. As part of its remit, it supports and assists its members with complying with FATF standards. Cayman is a CFATF member, and is required to report its progress to CFATF by way of the follow-up reports.

Included in the September report will be a number of key developments and actions taken by relevant agencies and at the national level. National-level actions include:

Highlighting Cayman's joined-up efforts for CFATF, Ms Lees said that during the week of 2 September, CIMA hosted FATF Training and Research Institute (FATF TREIN) training on the FATF standards. The training was attended by all relevant government agencies, as well as the Cayman Islands Legal Practitioners Association (CILPA) and the Cayman Islands Institute of Professional Accountants (CIIPA), which are industry bodies that regulate their members.

Furthermore, Ms Lees said that Cayman is in the process of carrying out assessments of AML/CFT/PF risks in certain specific sectors, as recommended in the Mutual Evaluation Report, in order to better align our regime to the areas of higher risk.

To assist with this risk assessment, consultants Financial Transparency Advisors (FTA) returned to Cayman on Monday, 26 August, for a week of workshops involving the AMLU and the Financial Reporting Authority (FRA), both in Portfolio of Legal Affairs; Ministry of Financial Services; Tax Information Authority; General Registry; Department of Commerce and Investment (DCI), Office of the Director of Public Prosecutions; Customs and Border Control; Financial Crimes Unit, in the Royal Cayman Islands Police Service; and CIMA.

CFATF activity also included awareness sessions in August and September on filing suspicious activity reports, and targeted financial sanctions. DCI's sessions on 15 August and 29 August focused on dealers of precious metals and stones, and real estate practitioners and developers, respectively; while CILPA's session for lawyers was on 28 August. The Non-Profit Organisations Registrar, in General Registry, held a session on Thursday, 5 September.

Meanwhile, CIMA will hold a session on Friday, 13 September for banks, and trust and corporate service providers.

Supporting all of these sessions are presenters from the AMLU, FRA, and National Coordination Team.

"The Premier, the Hon. Alden McLaughlin, has said that Cayman's response to the CFATF is a national priority," she said, referring to his Legislative Assembly statement in June.

"The response from all participants therefore has been strong, and their dedication is commendable. Government's leadership on policy and legislation also has been strong and decisive, and the private-sector's support in promoting effectiveness – including via the Cayman Islands Compliance Association, and Cayman Finance – has been robust as well.

"This shows Cayman's continuing commitment to ensuring our sound understanding of the FATF standards, which will increase our effectiveness as we implement them," Ms Lees said. 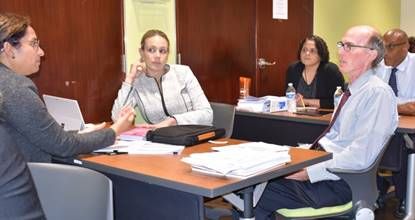