The Global Adjustment, formerly known as the Provincial Benefit, was introduced into Ontario's electricity program in January 2005 to ensure reliable, sustainable and diverse supply of power at stable, competitive prices.

Global Adjustment (GA) dollars fund three categories of electricity initiatives: (i) regulated rates set by the Ontario Energy Board for Ontario Power Generation Inc. (OPG) nuclear and base load hydroelectric generation; (ii) fixed payments to existing generators that have contracts with the Ontario Electricity Financial Corporation; and (iii) fixed payments to new generators and parties providing conservation and demand management that have contracts with the Ontario Power Authority.

In the case of generators holding contracts with the Ontario Power Authority, any shortfall in the fixed contract payment to these generators is paid by the Ontario Power Authority and then subsequently charged to consumers through the GA mechanism. Any surplus is returned to consumers by the same mechanism. As reliance on higher-priced renewable energy increases, it could be argued that the GA protects consumers against upward movement in spot market prices. However, not only have credits been few and far between since the inception of the GA, but since 2009 the amount of the GA charged to consumers has at times been greater than, and is often rivalling, the actual cost of the commodity for electricity.

The following graph illustrates the recent trend of increasing GA charges as compared to falling market prices. In general, the total effective price paid for electricity is equal to the sum of the spot market price (HOEP) plus global adjustment plus uplifts. 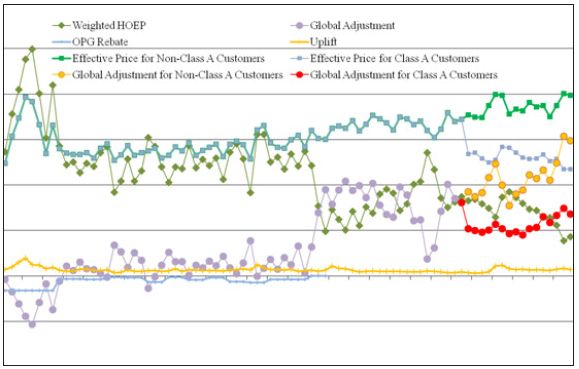 CHANGES IN THE ALLOCATION SYSTEM

Prior to 2011, the system-total of the GA program cost was allocated to all consumers on an electricity consumed, or "postage stamp," basis. Every month the IESO would determine how much it owed to cover all GA initiatives, and divided this amount by the actual MWh demand in Ontario to calculate how much to charge each consumer on a per MWh basis.

Class A consumers are those with an average monthly demand of over 5 MW. Each Class A consumer is required to pay a portion of the total GA charged to all consumers based on the proportion of electricity it consumes during Ontario's five demand peak hours in the previous year. If during these five peak hours a Class A consumer uses 1% of the total demand for electricity during these five hours, then they will be responsible for paying 1% of the system-wide GA charge in the next "settlement" (or payment period). Class B consumers are then left to pay the rest of the system-total GA costs on a postage stamp basis.

The regulation that introduced this dual class structure provided an opt-out period, wherein large volume consumers could opt out of Class A to retain their Class B classification. The regulation originally provided that mandatory participation in Class A for average monthly users of 5MW of electricity was to commence in the July 1, 2012 to June 30, 2013 settlement period. However, as of June 1, 2012, a new regulation has extended this opt out period, such that large volume consumers can continue to be charged on a postage stamp basis on an indefinite basis if they wish.

ADVANTAGES FOR CLASS A CUSTOMERS

This change in cost allocation can have significant cost advantages for Class A customer if they manage to shift their demands to lower demand periods, thereby reducing their peak demand factor. For example, if Class A customer were to use no electricity at all during the five peak hours, they could avoid paying the GA costs all together. Class B customer do not have this same opportunity, and they continue to pay towards the system-total on an electricity consumed basis, regardless of how much (or little) electricity they consume during peak hours.

For instance, the Market Surveillance Panel reports that "[t]he average effective price for all Ontario customers during the 2011/12 Annual Period was $72.64/MWh. On average, Direct Class A customers paid $17.45/MWh less than this price while Class B customers on average paid $3.24/MWh more than this price."

CLASS B CUSTOMERS: SPLITTING THE DIFFERENCE

A study completed by Aegent for Canadian Manufacturers and Exporters shows that the annual GA costs will rise to over $10 billion dollars in 2015. Without this dual class structure, the study estimates a GA cost of $70 per MWh. But under this dual class structure, Class A consumers will pay $46 per MWh, realizing a saving of $24 dollars per unit, while Class B consumers will pay $73.90 per MWh, absorbing the costs that Class A consumers avoid under the new structure. In 2011, the spread between the GA paid by Class A and Class B consumers was $11.70 per MWh. Under this estimate, however, the spread will be increased to $27.90 per MWh, demonstrating the significant impact that the new cost allocation system is having on low volume consumers of electricity in Ontario.

THE GLOBAL ADJUSTMENT AND YOUR ELECTRICITY BILL

However, Class B is largely comprised of Regulated Price Plan (RPP) consumers. The GA charge is reflected differently on electricity bills for this sub-category of Class B consumers. RPP customers, usually residential consumers and small businesses, are governed by a regulation that entitles them to pay a fixed price for electricity unless they opt-out of the RPP by entering into a contract with a licenced electricity retailer. The GA is factored into the fixed RPP rate that is set by the Ontario Energy Board from time-to-time. This GA charge is, therefore, blended into the total price and does not show up as a separate item on the electricity bill.

Understanding what class and sub-category you fall into will help you discern exactly how much of your monthly electricity payments are being allocated to the GA initiatives. While Class B consumers cannot use peak demand avoidance strategies to reduce the amount they pay towards the GA, Class A consumers can readily take advantage of this mechanism. Understanding your electricity demands and developing strategies to adjust these demands is an important step in reducing Global Adjustment costs.

1. For the purposes of this article, Class B customers are deemed to include all Class A customers that are connected to the distribution system rather than directly to the IESO grid (also known as non-direct Class A customers).