Canada: So You're Coming To Canada, Eh? An Overview Of Canada's Laws Affecting The Medical Device Industry (Video)

by Grant Worden , Teresa Reguly and Albert Chan
Torys LLP
Your LinkedIn Connections
with the authors 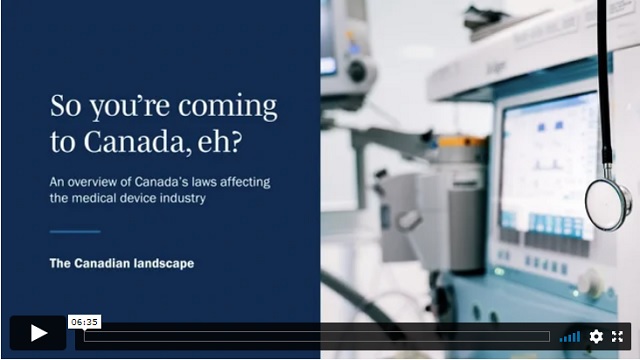 Canada's medical device market is highly diversified and mature—providing great opportunity to manufacturers who wish to enter it. However, Canada also has some of the most stringent medical device laws in the world.

In this video, Grant Worden, Teresa Reguly and Albert Chan explain the key differences in Canadian medical device laws versus other jurisdictions, such as:

Grant Worden (00:06): Hello and welcome to Torys' eight-part medical device series, "So you're coming to Canada, eh? An overview of Canada's laws affecting the medical device industry." My name is Grant Worden. I'm a Partner in Torys' Litigation Department and lead the Product Liability Practice at the firm. I'm joined today by Teresa Reguly and Albert Chan, who will be speaking about medical device regulation in Canada.

Grant Worden (00:29): Albert, let me start with you. At a high level, please describe how medical devices are regulated in Canada.

Grant Worden (01:14): Teresa, are the requirements for device approval in Canada similar to other jurisdictions?

Teresa Reguly (01:20): Yeah, they are quite similar, Grant. There are a few differences to note. One is that in Canada there are four categories in terms of risk class. So Class 1 being the lowest risk, Class 4 will be the highest risk. Other jurisdictions like the US, for example, have only three different categories. So it might be that when you're bringing your medical device to Canada, you're in a slightly different category than you might be in another jurisdiction, which might mean that you get questions from Health Canada that you didn't encounter during the approval process in the other jurisdictions. Another thing to note about Canada is we don't have a predicate device framework the way that the US and other countries do where you can essentially rely on the fact that there is a similar device on the market and your device is similar to that device that's already been on the market for some time. So in Canada you have to submit your own safety and efficacy data or support for the safety and efficacy of your device as part of the application. You can't rely on someone else's previous submission when you do your file.

Albert Chan (02:35): And just turning back also to that classification issue Teresa mentioned. Sometimes a manufacturer will find that its product is a medical device outside of Canada, but when they bring it to Canada, Health Canada will classify it differently. For example, we've been involved in some matters where a product is instead regulated as a pest control product in Canada. And this was particularly notable during the pandemic when Health Canada issued an interim order that regulated UV radiation-emitting and ozone-generating devices as pest control products under separate legislation, which was intended to make it easier for foreign manufacturers to get a product to market in Canada.

Teresa Reguly (03:16): And so we've seen this issue as well arise when we're talking about a product that is a drug device combination product. So the idea there being that there are both device and pharmaceutical drug aspects to the product that's coming to market. Health Canada has a policy with respect to these kinds of products where essentially the manufacturer is either required to comply with the food and drug regulations or the medical device regulations so that they're not subject to two different sets of regulations with respect to that product. Now, the two bureaus within Health Canada are going to speak during the approval process. And so, these kinds of files can be complex and sometimes take a bit more time to get through the regulator. Or whenever you have a complex product like this, we always recommend a pre-submission meeting with Health Canada. It's just really helpful to ask questions up front, to get a sense of where there might be some hurdles or challenges to work through with the regulator, and just get an understanding of how the regulator views the product before we actually start the robust communications with them.

Grant Worden (04:31): So let's talk about software. Albert, is software regulated as a medical device in Canada?

Albert Chan (04:38): The short answer is yes. Health Canada has adopted a framework similar to what we've seen in the US for regulation of software as a medical device. Generally speaking, software will be considered a medical device if its purpose is to acquire, process or analyze a medical image, a signal from an in vitro diagnostic device, or pattern or signal from an imaging device, or if the software supports or provides recommendations to health care professionals or patients about the prevention, diagnosis, treatment or mitigation of a disease or a condition. So if you can demonstrate that your software does not take the place of a health care professional, meaning that the professional still makes a independent medical decision, then you can sometimes position your software as not being a medical device. And in these cases, the claims on the labeling and in advertising are critical in determining if the software is a medical device. And sometimes we can make changes to the product label or claims in Canada so that it is no longer represented for use in the diagnosis, treatment, mitigation or prevention of a disease. Then we can sometimes move Health Canada to say it is not regulated as a medical device.

Grant Worden (05:55): Thanks, Albert. Thanks, Teresa. So to sum up with respect to Canada, there are four classes of medical devices. There's no reliance on predicates. Products classified as medical devices elsewhere may be classified differently in Canada. Products are regulated as drugs or devices, but not both. And software is regulated as a medical device. Sounds simple, but as always, the details can be much more complicated.

Grant Worden (06:20): Thank you for joining us today. We hope you'll join us for the next installment in our eight-part medical device series, "So you're coming to Canada, eh? An overview of Canada's laws affecting the medical device industry."