by Mark W.S. Bain
Torys LLP
Your LinkedIn Connections
with the authors 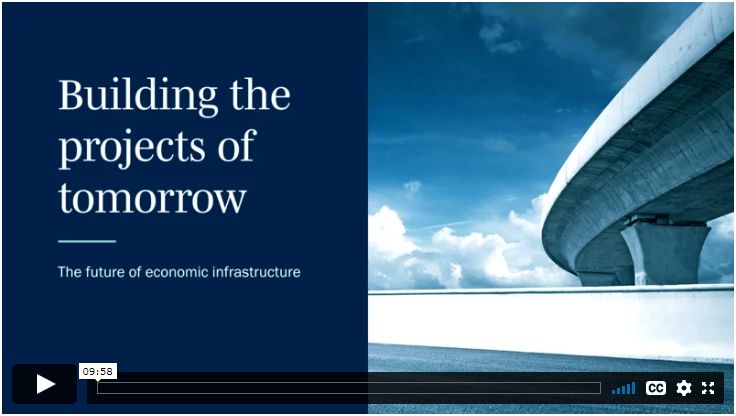 In this video, Mark Bain shares what lies ahead for the sector as it transitions to new opportunities and models of operation.

Click here to see other videos in this series.

Mark Bain (00:07): Hi, welcome. I'm Mark Bain. I'm a Partner at Torys where I am co-head of the Infrastructure and Energy Group and head of the Public-Private Partnerships Practice, here today to talk to you about the future of economic infrastructure.

Mark Bain (01:22): Looking at what sort of projects I see ahead in the economic infrastructure sphere, broadly people would have historically defined these by the nature of the industry that was going on. So economic infrastructure, broadly would be seen as power, water, telecom, and transport—infrastructure that both drives economic activity and is valuable to users. So there's some user charge associated with it. And then the counterpart to that would be social infrastructure, municipal universities, schools and hospitals, and things of that nature that don't traditionally drive revenue, but are essentially cost centers within government that drive the invaluable public purpose. So that would be historically how you divide the economic and social infrastructure spheres. I think more recently they're defined not by the nature of the industry, but by their purpose. So I think economic infrastructure today is conceived as sectors that get people to market, get goods to market and get ideas to market.

Mark Bain (02:27): So when looking at how these projects are going to be delivered in the future, I think they will be delivered a little bit differently than in the past and that reflects a couple of things that are going on. One is that the interface of the public delivery and the private delivery of economic infrastructure will change. We certainly see projects and has long seen projects, things like railroads that have been delivered purely by the private sector. And we've seen things like power systems that traditionally have been delivered primarily, if not exclusively, by the public sector. I think those things are going to start to merge in a couple of ways and for a couple of reasons. One is, the need is just greater and greater than ever before. The second is, in addition to the public policy imperative of driving economic activity, other things are being layered in. So for example, the desire to have more green power, more green aspect to our economy, the requirement or the desire to have greater Indigenous economic reconciliation. When you layer those things on top of projects, we will often find out that projects are financeable in part on their own attributes, and in part requiring some taxpayer support in pursuit of the public policy imperatives that don't, by themselves, drive revenue. So I think that will cause us to look at different ways in which the public and private sector can come together, whether through P3s or some other model that nimbly combines the two to make sure that the essential infrastructure is delivered for the essential public purpose.

Mark Bain (04:05): In looking at the prospects for economic infrastructure, certainly we see the tailwinds of public policy desire to get projects moving, desire for economic activity, and desire of the private sector to be involved. We also see headwinds, and those are in the nature of things like supply chain constraints, skilled labour force constraints, and a regulatory timescale that has valid objectives but has sometimes slowed down projects more than desirable. So to overcome those headwinds, we're going to have to come up with nimble approaches that allow us to get valuable projects done in a realistic time scale, and that will probably require something a little bit more nimble than what we've seen. We'll need to get away from rigid contracting with rigid approaches to risk transfer and to allocation of risk between public and private sectors. We'll need to have a little bit more collaboration to drive the kind of impetus and forward progress that we desire for our economic recovery.

Mark Bain (05:12): As examples of projects that will bring people, goods and ideas to market. We have seen different approaches involving public and private collaboration, but certainly in the getting goods to market, we have seen projects in the road sector, bridges, ports, and so on. We're seeing maritime ports on both, in fact all coasts under consideration, inland ports as well, international bridges, including the Gordie Howe Bridge and the TASR Road and other roads. The TASR Road in the Northwest Territories is really a resource road to get mining to market and people to market as well. For getting people to market, we see across the country projects like the VIA High Frequency Rail project intended to allow intercity travel in a more predictable way. And we see light rail projects intended to get people to workplaces in the major metropolitan centres, and those are everywhere: Ottawa, Toronto, Waterloo, Calgary, Edmonton and Vancouver. Multiple projects in all of those cities. And the getting ideas to market is an emerging idea and people would sometimes not have thought of that as part of our modern infrastructure. But certainly during COVID, we saw the urban rural divide playing out so that there was unequal ability to access the modern markets and to access modern workforces. So we've seen a number of projects intended to bridge that divide, including the Mackenzie Valley Project in Northwest Territories, the Dempster Fibre Project in Yukon, and here in Ontario, the Swift Project, for multiple municipal infrastructure projects, and Ontario's project now underway for the accelerated high-speed Internet program that will connect all unserved and under connected communities in Ontario by 2025. Those are all important projects to get goods, people and ideas to market.

Mark Bain (07:13): I predict that government policy is going to evolve as we come out of COVID from a policy that was directed largely towards economic survival during COVID to economic prosperity and growth coming out of COVID. So that will play out in a couple of ways. I expect that public policy goals are going to be woven into those economic infrastructure imperatives—so those are things like green infrastructure, climate change, Indigenous economic reconciliation and the like will be woven in. And our projects that are advanced will then have public policy imperatives that are driven by economic growth, as well as driven by other public policy imperatives. And so the way that those will be delivered will likely be a little bit different than the past. There will need to be a new, nimble, more collaborative approach between public and private sectors to deliver those projects in unison. We'll probably see more collaboration, we'll see an evolution of models that we've seen before in the P3 project development, project finance markets. And I think we will, with the advent of programs like the Canada Infrastructure Bank, see projects' finance that are not completely standalone, financially sustainable, but are partially financially sustainable and partially driven by public policy imperatives that brought together will lead to great success. Coming out of COVID, what I see ahead is I think we'll see a pivot in government policy from programs that are aimed at economic survival to those that are aimed at economic prosperity, and that economic prosperity will be beneficial to the economy overall, but will also allow the kind of economic capacity generation, the kind of economic health in the country that allows for other public policy imperatives, such as social infrastructure and social programs to be funded and available. We'll see these things coming together probably in a more collaborative way than we have in the past, so that both the economic and the other social policy objectives can be delivered through clever, collaborative, nimble approaches to delivering economic infrastructure. So I think we'll see a modernized approach to project development, P3 and project finance that allows these programs to come together in a way that satisfies a myriad of objectives, so I wouldn't predict good amounts of activity ahead for good and laudable public purposes.

Mark Bain (09:43): Thank you for your time today. If you'd like to hear more about our projects practice, please go to www.torys.com.