by
PwC Management Services LP
To print this article, all you need is to be registered or login on Mondaq.com.

This quarterly update discusses developments related to the accounting for income taxes. It includes:

Legislative developments from July 1 to September 30, 2012, that affect income taxes are outlined below.

The August 14, 2012 legislative proposals also include amendments to the shareholder loan rules that permit Canadian corporations to make loans to foreign parent companies or related non-resident companies without incurring the deemed dividend withholding tax, on an elective basis.

On July 25, 2012, the Department of Finance released draft legislative proposals that implement measures announced on July 20, 2011, relating to the taxation of SIFTs, REITs and publicly traded corporations. The proposals apply in respect of transactions involving certain stapled securities and limit the deductibility of amounts paid or payable after July 19, 2011, in respect of those stapled securities, subject to a transitional period. Comments were due by September 25, 2012. See our Tax memo "Proposed changes for SIFTs, REITs and publicly traded corporations: Deductibility of amounts paid in respect of stapled securities" at www.pwc.com/ca/taxmemo.

Status: As of September 30, 2012, these legislative proposals had not been tabled in the House of Commons.

The Ministère des Finances released Information Bulletin 2012-5 "Harmonization with Certain Measures of the Federal Budget of March 29, 2012" on July 6, 2012.

Status: As of September 30, 2012, these measures had not been tabled in the Quebec parliament.

The following tables list key bills that include income tax rate changes, other income tax changes (e.g., for research and development) or capital tax changes, and that were:

Status: No bills received first or third reading in the federal House of Commons or the provincial or territorial legislative assembly or were enacted from July 1 to September 30, 2012. 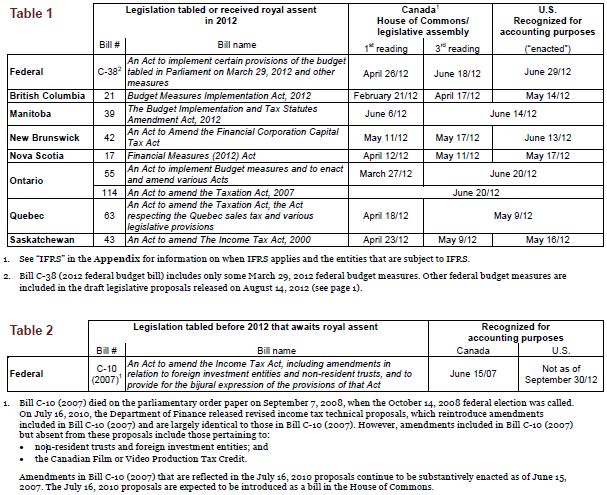 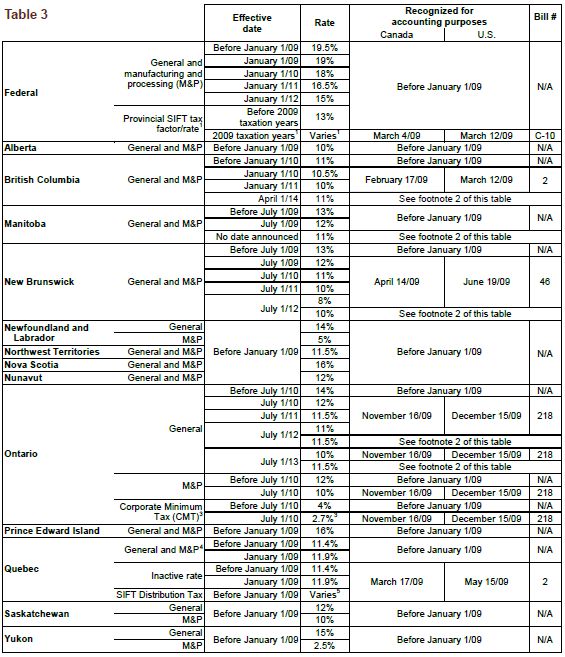 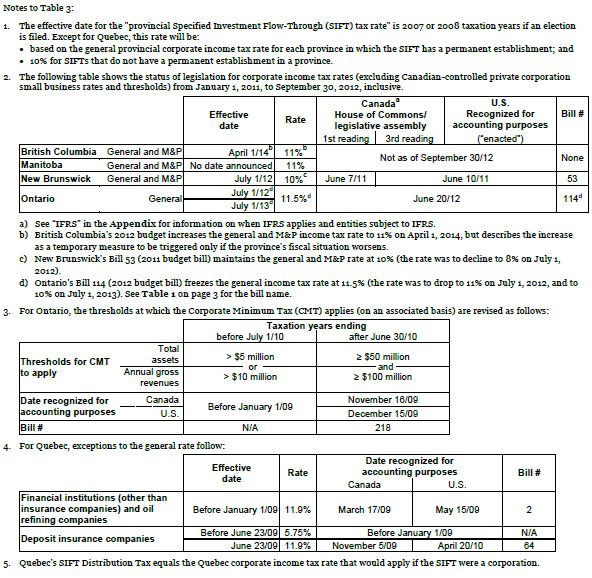 For accounting purposes, knowing which income tax changes are considered "substantively enacted" for Canadian purposes and "enacted" for U.S. purposes can be important.

Under Canadian generally accepted accounting principles (GAAP), which include International Financial Reporting Standards (IFRS), and U.S. GAAP, a future tax asset or liability is measured using the future tax rate and tax law expected to apply to taxable income in the periods when the underlying temporary difference is expected to be settled or realized (or simply reversed).

For fiscal years beginning after 2010, IFRS is mandatory for publicly accountable enterprises (PAEs), which are Canadian reporting entities. However, private enterprises, not-for-profit organizations and public sector entities to which the Public Sector Accounting Handbook applies are excluded. Although an enterprise that is not a PAE is not required to adopt IFRS, it can elect to do so. Mandatory adoption of IFRS has been deferred:

For more information, see our Tax memos "IFRS and Tax: The Rubber has Hit the Road" and "The Move to IFRS: CRA Guidance" at www.pwc.com/ca/taxmemo.

Guidance is still pending on the concept of "substantive enactment" as that term is used under IFRS. As a result, different views may exist on when an income tax change becomes "substantively enacted" under IFRS.

Before Canada's adoption of IFRS, substantive enactment did not occur until draft legislation was tabled for first reading. However, in the case of a minority government, proposed income tax amendments were not normally considered substantively enacted until the proposals had passed third reading.

1. Other than Canadian-controlled private corporation small business rates and thresholds.