Canada: From Jaundice To Kernicterus - When An Outdated Medical Protocol Causes Irreparable Harm

New research, advances in technology and regular reviews of existing assumptions and practices often help medical practitioners refine their approach and ultimately improve outcomes for patients. This professional commitment to adhere to standards of practice that are up-to-date and effective is one of the reasons we hold medical care providers in such high esteem. It is quite disappointing, therefore, to learn of an instance where a failure to "keep current" and exercise appropriate clinical judgment ultimately caused a patient to sustain serious injury and disability. 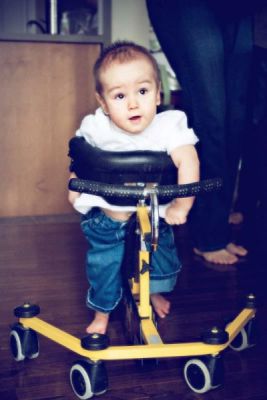 Maclain Agnew, pictured at 18 months shortly following the confirmation of his diagnosis. This moment was particularly special for his family, as he was using this pony walker to brace himself and move independently for the first time.

In this blog, we discuss a recent case where an outdated protocol was found to have caused a newborn infant to suffer permanent brain damage. If there can be such a thing as a silver lining to this kind of tragedy, it may be that news of this case will help to spur efforts to bring about worldwide changes to this medical protocol to prevent further injuries.

Jaundice in Newborns: A Common Condition That Needs Treatment

More than half of full-term newborns and up to four out of five premature infants will experience a condition called jaundice. Excess levels of bilirubin in the blood (old red blood cells) can occur if the infant's liver is not yet able to process and excrete them as quickly as it should. A telltale sign of jaundice is yellow pigmentation of the skin and the condition is easily diagnosable.

In many cases, jaundice will resolve on its own. Sometimes minimal intervention may be required and inexpensive light therapy treatment (phototherapy) is used to help break down the bilirubin. In more serious cases, it can be treated with an exchange transfusion procedure.

Unfortunately, jaundice that is not closely monitored and left untreated is the most avoidable type of medical malpractice litigation we see. When providers fail to use their judgment in providing these treatments, jaundice can result in severe irreversible brain damage known as kernicterus. Obvious clinical signs and symptoms of bilirubin neurotoxicity are evident in cases of kernicterus encephalopathy. This condition can lead to neurological damage, deafness or even death.

Outdated Protocols, and No Clinical Judgment

Maclain Agnew was born on August 2, 2007 at the Oakville Trafalgar Memorial Hospital. At 29 weeks and five days, he was premature and weighed only 1550 grams. Sadly, his twin brother died shortly after birth. Maclain was transferred to the neonatal intensive care unit of the Defendant Hospital.

Although Maclain recovered from his difficult birth, a few days later, while under the care of neonatal nurses, clinical nurse specialists and neonatologists at the Defendant Hospital, he developed jaundice and obvious signs and symptoms of bilirubin neurotoxicity such as lethargy and irritability. Even as the jaundice and the clinical symptoms of bilirubin neurotoxicity worsened, they were ignored.

At any time while under their care, Maclain's neonatal nurses and doctors could have ordered phototherapy in response to the clinical symptoms he was exhibiting. However, the medical team was operating under the Defendant Hospital's outdated guidelines which prescribed the blood bilirubin thresholds at which phototherapy should be administered. Moreover, these guidelines were intended for use on full-term, healthy babies. Maclain was neither. Although the guidelines in question also required the medical team to exercise their own clinical judgment to make decisions about the use of phototherapy, the team relied on the guideline's threshold.

The Defendant Hospital could not confirm when their guidelines were created, how they came into existence or if there was any process for updating and revising them. The guidelines in question appear to be based on a 1985-86 Neonatal Handbook produced by another Canadian Hospital that specializes in children's health care, and two pieces of medical literature from 1993 and 1994 applicable to well term infants (which Agnew was not).

However, the Defendant Hospital's guidelines did not reproduce important caveats in the 1985-86 Handbook from which they appear to be based. The Handbook had recommended lowering the threshold for phototherapy if there were clinical signs of bilirubin neurotoxicity such as lethargy. Updates to the 1985-1986 Handbook in 1992, 1999, and 2007 (which were based on modern medical literature, including research on unwell pre-term babies) instituted guidelines for beginning phototherapy treatments at lower bilirubin thresholds. These thresholds, which were not applied to the Defendant Hospital's Guide until 2010, would have meant Maclain would have qualified for treatment even without his clinical symptoms.

If inexpensive and low-risk phototherapy had been used when he exhibited clinical symptoms of kernicterus, Maclain would almost certainly be free of the disabilities caused by chronic bilirubin encephalopathy.

As plaintiff lawyers on Maclain's case, and as friends to his family, it is our fervent hope that lessons learned in this case will spare others from experiencing such a tragic situation in the future.

Guidelines for the use of phototherapy need to be based on current literature; they should be reviewed every five years and updated appropriately based on new information. These guidelines also must take into account that not all babies are carried to term and are well when born. Clinical judgment needs to be exercised in the care of infants exhibiting jaundice; the condition, which can result in kernicterus encephalopathy, should be treated with great caution. Finally, a worldwide protocol for phototherapy should be developed by the pediatric community with the caveat that clinical judgment should be exercised in every case.