Shareholders have braced themselves for the upcoming Harvey Norman Annual General Meeting (AGM) to be held on November 27, 2019. The meeting will not be taken lightly following the shocking results of the 2018 AGM.

Votes against remuneration report in 2018

Questions over what will happen at 2019's AGM

Harvey Norman is now in hot waters, especially if majority of the shareholders continue to vote against the adoption of the remuneration report in the 2019 AGM, leading to a spill resolution.1 The Corporations Act 2001 has been amended to include a "two-strike" rule. A company will be given a first strike if 25 per cent or more vote against the remuneration report. Until the next AGM, the company is required to review and respond to the shareholders' growing concerns regarding executive pay.2 The next AGM will determine whether a company gets a second strike. This occurs when 25 per cent or more shareholders still vote against it. During the same AGM, shareholders will establish whether directors need to stand for re-election. If 50 per cent or more shareholders vote for to pass a "spill" resolution, a "spill" meeting will be held within 90 days.3 Proxy advisors Ownership Matters and CGI Glass Lewis have advised investors to vote against the remuneration report and face a spill resolution to effectively improve its corporate governance. However, KPMG partner and adviser, Stephen Walmsley claims that the proxy advisers are "irresponsible" to advocate for a spill resolution as it may4 negatively affect the strategy and market value of the company. 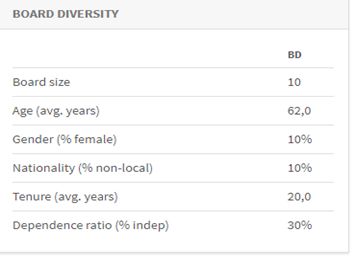 Proxy advisory firm Ownership Matters even goes so far to propose the voting against the re-election of non-Independent Directors to force the company to make board changes. In the Harvey Norman 2019 Annual Report, the company responded to the reason behind appointing fewer independent directors, stating that each executive director (including non-executive directors that are not independent) still provide quality independent judgment to the issues that arise.

Tenure reveals a stale board

The board also appears to be stale. The average tenure of the board directors is 20 years. For some time now, corporate governance stakeholders; governance experts and shareholders alike have paid substantial attention to the issue of board refreshment or entrenched boards. Usually, when a board is stale, there is the concern that they may lack new perspectives, become complacent which may affect the long-term performance of the company as well as provision of effective oversight and management.

One more independent director added to the board

Data from CGlytics shows that although there are 10 board members, most of their skills are concentrated on three areas: finance, advisory and technology. This shows that the composition of the skills matrix is not balanced between the members and is not aligned with the skills that the company requires. Having a skill such as risk is a vital key competency a board needs, especially in turbulent times that may make or break the company.

What is the proxy advisors view?

Because of the criticism and frustration of stakeholders, proxy advisors such as ISS Governance and Ownership Matters encourage investors to vote for the appointment of self-elected Mr. Stephen Mayne as a director. Mr. Stephen Mayne is a journalist and a shareholder activist that constantly offers himself up for election on boards.8 Executive Chairman Gerald Harvey has urged Australian regulators to question the credibility of the proxy advisors that advise shareholders to appoint someone who has no experience in the retail industry.

9Different proxy advisory firms Ownership Matters and CGI Glass Lewis are also recommending against the re-election of Chief Executive Officer Katie Page.10 The company is being questioned by the Australian Securities and Investment Commission regarding the high increase in pay for Ms. Page despite the decrease in the Total Shareholder Return (TSR) of the company.

Where does Harvery Norman's CEO Pay for Performance rank?

The CGLytics Relative Positioning Pay for Performance tool compares Harvey Norman's CEO pay with that of the industry peer group's three year TSR. The performance evaluation shows that it is misaligned. The company's total realized pay is in the 45th percentile while the three-year TSR ranks in the 15th percentile and shows that the CEO is compensated more than the increase in TSR. 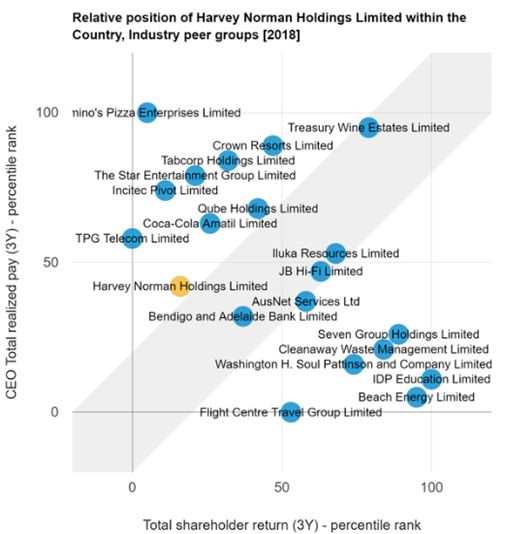 As to whether, these changes have the potential to avert a potential revolt at the upcoming AGM, it remains to be seen.