Australia: A stain on our national record forever: McBride on the withdrawal from Afghanistan

The United States withdrew its remaining troops from its two decade-long war in Afghanistan on 30 August. This came just weeks before the twenty year anniversary of the 9/11 attack in New York, which was the pretext for western allies to invade the Central Asian nation.

The late 2001 invasion resulted in the end of five years of authoritarian Taliban rule. However, on Tuesday this week, the Taliban announced its new Islamic Emirate of Afghanistan interim government, which includes an interior minister who is on the US most wanted terrorist list.

The half a decade of late 1990s Taliban rule was marked by the suppression, segregation and confinement of women and girls. Today, the women of Afghanistan are staging fierce demonstrations demanding that they're not banished from public life once again.

And the mid-August scenes of the Taliban retaking Kabul and the desperation of local allies seeking evacuation at the capital's international airport have left people over there and across the globe questioning what the entire US operation was all about.

The crimes of government

Indeed, what he saw taking place led him, as having been a "true believer" in the cause of the western allies, to completely lose faith.

On return from his second tour, McBride went to his ADF superiors with his concerns over how what was transpiring on the ground in Afghanistan was far from the official version. However, this was to no avail: rather than scrutinise Australia's presence, McBride became the subject of scrutiny.

So, the lawyer went to the press with classified information, which became the ABC's 2017 The Afghan Files. The report exposed war crimes perpetrated by Australian special forces, similar to what the government's Brereton report did years later, yet David is facing long-term prison for his part.

According to McBride, the war crimes in Afghanistan that were revealed through his actions were never his chief priority in blowing the whistle, as he was trying to expose the bigger picture: the corruption of the higherups who were perpetrating a war for show and profit.

Betrayal is our tactic

Australia followed the US into Afghanistan based on the decision of a handful of Howard government ministers that made up the war cabinet. And months before the final withdrawal, in something of a calculated move, our government disbanded its embassy in Kabul.

More recently, the Morrison government has faced sustained criticism due to its failure to evacuate all the Afghan people who'd assisted our troops.

Defence minister Peter Dutton tried to knock down those voices, when he suggested our local allies may have become turncoat terrorists.

Sydney Criminal Lawyers spoke to David McBride about whether the travesty the US withdrawal became was a surprise, the reasons he believes Washington and its allies staged the decades-long war, and how recent events reflect on his own decision to blow the whistle. 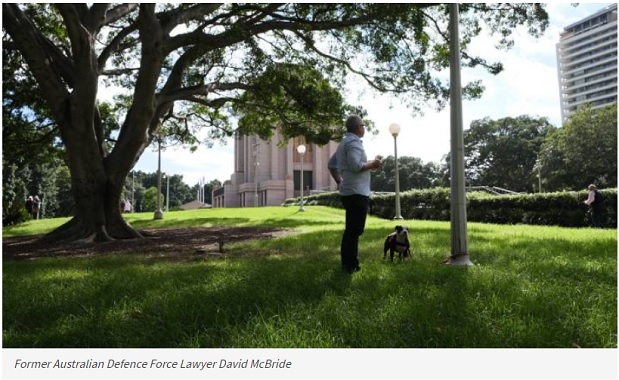 The final day of the US pull out from its twenty year war in Afghanistan was Monday last week. Many aspects of the operation have been criticised, especially that prior to full withdrawn, Kabul had fallen to the Taliban.

Western forces are saying they're shocked by the swift takeover. Mr McBride, overall, what are your thoughts on the US pull out? And is the chaos it left really a surprise?

No. It was no surprise to me at all. I don't think it was any real surprise to anybody who worked there over the 20 years.

It wasn't about what happened over the last few months, or few weeks, it was all a debacle for 20 years.

We were never really setting the country up for success. The good thing is it was finally revealed that the people running the show – the Americans – either didn't want it to work or were quite incompetent and had no idea what was really going on in the country.

Looking back over the last two decades, what would you say the conflict in Afghanistan was all about? What was the aim of invading the nation?

It was to win US elections. There is a section of the population that believes dropping bombs and shooting people equates to strong leadership.

The main thrust of all these invasions was to win votes, and every leader that committed more troops and dropped more bombs got a surge of approval for doing so.

As seen from Biden's withdrawal, his approval has dropped, even though it was undoubtedly a sensible thing to do, even if it was done badly.

Another reason it was kept going – a secondary reason – was that it made a lot of money for a lot of people. A lot of big companies, like Haliburton and Dyncorp, and defence contractors, like Boeing and McDonnell Douglas and Norseman.

They all made a lot of money from supplying the defence forces, so they didn't want it to end.

Political parties made a lot of money because contractors that were building roads and schools and supplying the troops were giving large donations back to the political parties.

Julian Assange was right when he said they didn't want the war to end for as long as they could keep it going as it was a big money spinner for key corporations in America, Australia and Britain.

You served two year-long tours of duty in Afghanistan as an ADF lawyer in 2011 and 2013. How would you describe what you witnessed?

The people on the ground generally did a good job. The closer you got to the ground you can't really fault them.

The higher you go up the chain there was more blame, in that everybody knew that it wasn't really working, and the so-called strategy was either incredibly flawed or incredibly cynical.

One of the standard jokes that went around from the officers there was, "It was okay when I left".

Everybody's aim was to paint a rosy picture with PowerPoint slides showing how good everything was going, knowing full well that it would all collapse like a house of cards, as soon as the American aid that was propping everything up left.

But as long as it didn't collapse when you were there, you wouldn't be blamed.

I would like to see some accountability for those senior people that knowingly put together those PowerPoint slides painting a rosy picture, while, at the same time, knowing they were false.

Without getting into the specifics of your case, would you say what's happened over recent weeks gives credence to your decision to leak classified information about the Australian presence in Afghanistan?

I've been completely vindicated by it. The fact that the Afghan president, Mr Ghani, was caught running away with his bodyguards and a helicopter full of cash demonstrates everything I was trying to say – in fact, the bigger picture that was hard to get across to people.

Everything was geared to putting out false messages that would make the voters in America, Australia and the UK, think things were good. And it didn't matter to so many senior people that they weren't.

It was just like a Ponzi scheme, where putting out false profits was used in order to justify getting elected and to justify more money from the taxpayer purse, with no real intention of ever helping the Afghan people.

The war powers debate is front and centre at the moment. What's your take on the decision for the entire nation entering into a foreign conflict continuing to be in the hands of a few federal ministers?

It's a disgrace. We know now that we simply cannot trust them with our best interests.

The Americans probably give them donations. They probably help political parties through the backdoor. So, they can effectively bring our country to war by giving favourable treatment to one or two people.

We saw how skewed it is with the Bernard Collaery case, where it's very clear that the government used our security services in order to benefit a couple of oil companies.

The really terrible thing about that is that Alexander Downer, who was the foreign minister at the time, doesn't seem to think there is anything wrong with that.

That is the really scary thing, where the people in government think self-serving interests, helping donors or helping countries for their own benefit – for the benefit of people in politics – is an okay reason to commit the country to warlike acts, or to commit our servicepeople to break the law in overseas countries.

And lastly, Mr McBride, there have been many concerns raised about the Australian pull out from Afghanistan.

Our nation disbanded its embassy back in May. There were questions about evacuating locals that assisted us in the war, as well as others raised about the numbers of Afghan refugees we're prepared to take in.

What do you think about the way our nation has carried itself in the final days of the Afghan War?

I don't mean any negative dispersions against the average Australian. They are appalled by it.

But the government got local Afghan people to fight for us in Afghanistan and quite literally lay down their lives for us, on the premise – unwritten perhaps – that if push came to shove, we would at least help them in return.

But when push came to shove, we just said, "Sorry buddy. You trusted us. Goodbye."

Then for the minister to come out and say that we think some of these people might be suicide bombers is the ultimate kick in the guts for people who have put their life on the line for us to be refused a spot in Australia because of some throwaway comment that has no basis in fact: that they might be terrorists.

If they were terrorists, they wouldn't have helped us for so long. If we weren't sure about people, you give them the benefit of the doubt rather than let them die at the hands of enemies.