Law No. 27,346 introduced amendments to Value Added Tax Law and designated as substitute obligors certain tenants, borrowers or intermediaries of foreign individuals that lease or render services taxed within Argentina. As a result of the aforementioned amendment, the treatment of the provision of services with international components (parties, place of rendering the service or place of use or effective exploitation) in Value Added Tax ìs analyzed briefly.

On December 27, 2016 the Argentine Official Gazette published Law No. 27,346 that designated as substitute obligors for the payment of the Value Added Tax (hereinafter, the "Tax") the following: "tenants, borrowers or intermediaries of foreign individuals that leases or renders services taxed within the country, in their character of substitute taxpayers".[i] This amendment completes what could be considered a legal loophole regarding the taxable person when the service is rendered in Argentina by a non-Argentine resident.

By virtue of this amendment and although regulation is pending, it could be asserted that the way in which the Tax affects the rendering of international services is now completed.

a. Used or effectively exploited in Argentina

The taxable event related to the rendering of services is set forth in section 1, subsection b) of the Value Added Tax Law (the "VAT Law"), stating that the lease and rendering of services in Argentina are within the scope of the Tax. As a general principle, it should be said that services that are materially executed within  Argentine territory fall under the scope of the Tax and, thus the residence of the lender (Argentine resident or non-Argentine resident) is irrelevant.

In this sense, a service rendered materially in Argentina is taxed, whether it is rendered by an Argentine resident or non-Argentine resident. However, if the lender has residence abroad, until the amendment introduced by Law No. 27,346 –as yet unregulated– in practice what occurred is that the non-Argentine resident rendering the service in Argentina was not able to register as an Argentine taxpayer, as well as to assess and pay the Tax. Under the new regime, this practical impossibility would be overcome, since the substitute obligor will be able to assess, pay the Tax and compute the corresponding tax credit

On the other hand, if the taxed service is rendered by an Argentine resident, the new regime would not apply, and the resident is considered to be a  taxpayer (not a substitute obligor).

b. Used or effectively exploited abroad ("export of services")

The second paragraph of subsection b) section 1 of the LVAT states that services used or exploited abroad would not be considered as services rendered in Argentina.[ii] This section is supplemented by the section added after section 77 of the VAT Law Regulatory Decree, which provides that exporters of services may recover the Tax paid in relation with goods and services contracted. In other words, if the figure of "export of services" applies, there is no obligation to pay the tax.

2. Services rendered from abroad, but used or effectively exploited in Argentina ("importation of services")

It is important to be aware that in case of services rendered from abroad, that are used or effectively exploited abroad, the taxable event does not occur.

On the other hand, when the service is rendered from abroad, but used or effectively exploited in Argentina, and the person receiving that service is a VAT taxpayer, the taxable event provided in section 1, subsection d) of the VAT Law occurs (the so-called "Importation of services"). In these cases, the beneficiary of the service is considered as the taxpayer, who must assess and pay the tax, and is also entitled to compute the corresponding tax credit.

Regarding final consumers or exempted persons, the taxable event corresponding to "Importation of services" does not occur. 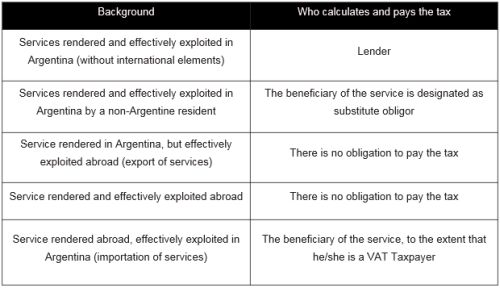 [i] For further information on the substitute taxpayer regime introduced by Law No. 27,346 see Marval News No. 168, dated December 29, 2016, http://www.marval.com/publicacion/modificaciones-introducidas-por-la-ley-n-27346-al-regimen-impositivo-argentino-12914%26lang%3Den/

[ii] It is important to mention that the Argentine Tax Authority has issued several opinions interpreting the concept "use or effective exploitation abroad", whose analysis exceeds the scope of the present report.