In the wake of the financial crisis, the US Securities and Exchange Commission adopted detailed data reporting rules for private funds on both Form ADV (2010) and Form PF (2011). In its continuing push to gather more asset management industry data, agency officials have been hinting for months that portfolio-level reports on investment adviser separate accounts and registered investment companies would be next. The agency now intends to close these perceived gaps through a pair of rule proposals that it announced on May 20, 2015.

What does the SEC do with the data it collects? The agency says better data allows it to more effectively monitor industry trends and assess risk, focus its examinations, conduct investigations and, when necessary, bring enforcement actions. Collecting more industry data also serves the SEC's political interest in protecting its position against other financial regulators. Lest anyone miss that point, the agency opens the registered investment company reporting proposal with the unqualified assertion that "the Commission is the primary regulator of the asset management industry."

The SEC is soliciting comments on its rulemaking proposals. Comments are due within 60 days following publication of the proposals in the Federal Register.

The proposed amendments would capture information that the SEC says is comparable to information the agency already collects on Form PF regarding private funds.3 Specifically, registered investment advisers are proposed to:

All advisers would report this separate account information annually. Advisers with at least $10 billion in RAUM would report both mid-year and year-end information, but only as part of their annual filing. While no separate semi-annual filing is proposed, the agency requests comment on whether to require updated separate account information each time that an amended Form ADV is filed – a requirement that, if part of the final rules package, could add significantly to the burden associated with the non-ordinary course update filing that most advisers find necessary from time to time.

Other Proposed Additions to Form ADV

In addition to the proposals above concerning separate account information, the SEC's revisions to Form ADV would add new questions and amend existing questions on Part 1A of the form. Unlike the separate account information proposals, which appear to affect only registered investment advisers and not "exempt reporting advisers" (because exempt reporting advisers do not complete Item 5 of Form ADV, where the new requirements will be housed, the remaining changes to the form will affect all Form ADV filers. 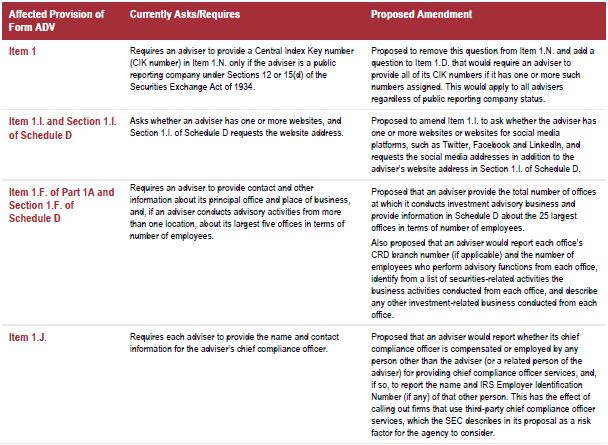 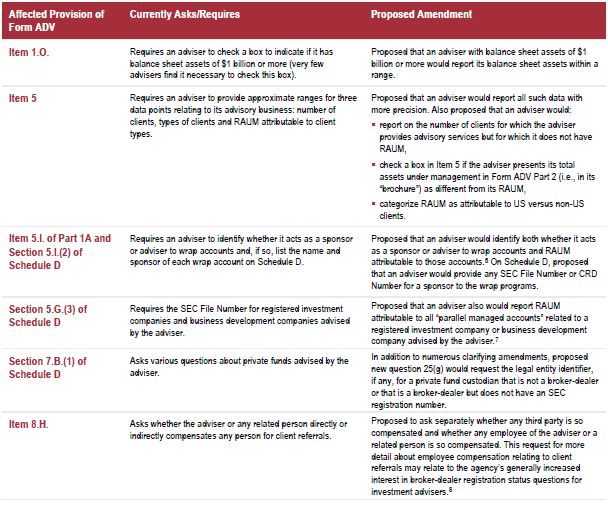 For a variety of tax, legal and regulatory reasons, investment adviser firms may be organized as a group of related advisers that are separate legal entities but effectively operate as a unified advisory business. Recognizing that a single group registration often will be less confusing and more efficient than would multiple, repetitive filings, SEC staff positions allow related entities to share a single SEC registration, subject to certain conditions.9

The SEC now proposes to codify the existing staff guidance. The proposed group registration rules would use the same terminology used by the staff to date, which refers to a "filing adviser" filing a single Form ADV on behalf of itself and other so-called "relying advisers" in the group that are controlled by or under common control with the filing adviser and that effectively conduct a single advisory business (collectively an "umbrella registration").10 Conditions to rely on an umbrella registration would be as follows:

These conditions track SEC staff guidance from the 2012 ABA Letter. The SEC also makes several points in the current rulemaking that address areas in which there has been mixed industry practice to date. Notably, the SEC is clear that umbrella registration as proposed is available only to fully registered advisers and not to "exempt reporting advisers."

Currently, Form ADV does not contemplate the group registration model, leaving group filers to develop ad hoc reporting formats as they complete the form. To address this lack of standardization, the SEC proposes to add a new Schedule R to Form ADV, which would request the following, to be completed separately for each relying adviser:

The SEC proposes two amendments to Advisers Act Rule 204-2, the books and records rule, which would require investment advisers to maintain additional materials related to the calculation and distribution of performance information.

These proposed changes are significant and can be expected to be the subject of a broad range of public comments. We will continue to track and report on the rulemaking as it progresses.

2 Form ADV filings are available to the public through the Investment Adviser Public Disclosure System (IAPD) at http://www.adviserinfo.sec.gov .

3 While the requested data may be broadly similar, Form PF filings are non-public, whereas the data now proposed to be collected on managed accounts on Form ADV would be publicly available.

4 Gross notional exposure is the percentage obtained by dividing (i) the sum of (a) the dollar amount of any borrowings and (b) the gross notional value of all derivatives, by (ii) the net asset value of the account.

5 The SEC also proposes to add a number of clarifying instructions to various questions in Form ADV. We generally do not summarize those proposed clarifications in this alert.

6 Form ADV, Glossary defines a wrap fee program as "[a]ny advisory program under which a specified fee or fees not based directly upon transactions in a client's account is charged for investment advisory services (which may include portfolio management or advice concerning the selection of other investment advisers) and the execution of client transactions." The SEC does not propose any changes to this definition.

8 We previously reported on a widely-cited SEC staff speech in this area. See our 2013 alert available at http://www.shearman.com/en/newsinsights/publications/2013/04/sec-lawyer-speaks-to-brokerdealer-registration-s__.

9 See American Bar Association Business Law Section, SEC Staff Letter (Jan. 18, 2012), available at https://www.sec.gov/divisions/investment/noaction/2012/aba011812.htm (the 2012 ABA Letter). The Division of Investment Management also provided earlier no-action relief to enable a special purpose vehicle that acts as a private fund's general partner or managing member to essentially rely upon its parent adviser's registration with the Commission rather than separately register. See American Bar Association Subcommittee on Private Investment Entities, SEC Staff Letter (Dec. 8, 2005), available at http://www.sec.gov/divisions/investment/noaction/aba120805.htm (the 2005 ABA Letter). The 2005 ABA Letter is understood to provide its own basis for not separately registering entities. It was not superseded by the later 2012 ABA Letter and also does not appear to be affected by the current rulemaking.

11 The SEC does not apply most of the substantive provisions of the Advisers Act to the non-US clients of a non-US adviser registered with the Commission. See Exemptions for Advisers to Venture Capital Funds, Private Fund Advisers With Less Than $150 Million in Assets Under Management, and Foreign Private Advisers, Investment Advisers Act Release No. 3222 (June 22, 2011) [76 FR 39646 (July 6, 2011)], at section II.D. The Glossary to Form ADV provides that "United States person" has the same meaning as in rule 203(m)-1 under the Advisers Act, which includes any natural person that is resident in the United States.

13 Rule 204-2(a)(7) currently requires advisers to make and keep: "Originals of all written communications received and copies of all written communications sent by such investment adviser relating to (i) any recommendation made or proposed to be made and any advice given or proposed to be given, (ii) any receipt, disbursement or delivery of funds or securities, or (iii) the placing or execution of any order to purchase or sell any security."