OFWAT, the economic regulator of the water and sewerage sector in England and Wales, has set out the price controls that companies must use for regulated activities from 2015 to 2020. This new economic settlement brings greater certainty on the lower end of future earnings in the sector. It also comes with upside potential from incentive mechanisms within the controls. Changes in the Water Act 2014, on consolidation and on opening non-household markets to competition in 2017, present owners and operators with new oportunities for consolidation and restructuring.

The system of regulation of water and sewerage companies in England and Wales controls charges to household and non-household customers. This is done by a cap on the amount that can be taken from regulated customers. The cap is set for 5 years and reviewed quinquennially for the next 5 years. The cap is generally expressed as an indexation of a basket of historic charges by reference to RPI+K, where K is an adjustment factor for e.g. financial returns, environmental spend required by law and efficiencies that the business should make.

This review period– PR14 - is the fifth review of controls. OFWAT has made significant changes to the approach, both in terms of the controls set and tools used to set them, while retaining many aspects of the approach considered to work well and to provide certainty and stability for companies and their investors, This made assessing the likely outcome of the review more difficult for companies and investors. That uncertainty is now removed.

The overall price control has been disaggregated into four separate controls for wholesale water and waste water, retail household and non-household. The use of the familiar form of RPI+K remains for the wholesale control, as does the use of return on regulatory capital value (RCV) assessed by the application of a weighted average cost of capital (WACC). Retail controls have been redesigned as a revenue cap with an in-built margin.

Some aspects of regulation that were too prescriptive, or had the potential to distort companies' decision making, are changed – for example, assessing costs on a total expenditure ('totex') rather than separate opex and capex measures - removes undesirable incentives for companies to use capital expenditure-intensive solutions where there may be better alternatives. Separate controls for companies' wholesale and retail activities have been set –allowing more effective incentives for the different parts of the value chain to be set and transition to a competitive market for retail services for non-household customers in England.

The quality of companies' business plans, constructed after significant customer engagement, has been central to the price control setting process. This means that boards of companies should focus on what outcomes customers want rather than on outputs the regulator wants. To balance risks and rewards fairly between customers, companies and their investors, a systematic approach to assessing risks has been used to ensure the overall package of price controls is financeable for companies and affordable for customers now and in the future– reflecting OFWAT's statutory duties. Management teams that outperform stated targets for their customers will be able to earn more than the basic regulatory returns assumed in the price control. The PR14 process has not been without twists and turns. Nonetheless the successive iterations on draft business plans by OFWAT with each regulated company has allowed companies to seek a price control that more properly reflects business needs.

OFWAT's headline announcement that the average annual combined bill for water and sewerage companies will fall by 5% by 2020 in real terms is in line with the earlier draft determination consulted on by the regulator. Over the iterations on business plans individual companies have however gained ground against the original proposals by OFWAT. To balance the books and maintain the headline 5% average reduction in bills OFWAT has tweaked the WACC it is using for most companies, reducing it from 3.85% to 3.73%. 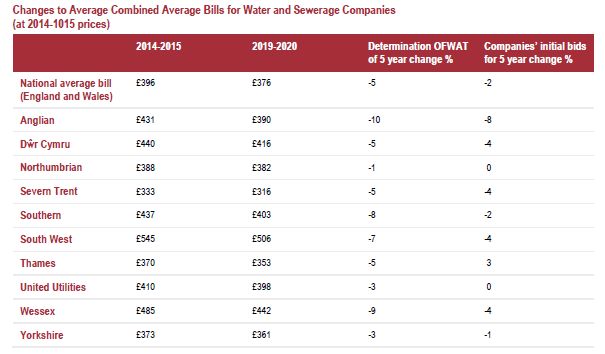 As with previous periodic reviews the plans are challenges for the companies. In each of the previous quinquennium the sector has outperformed the base line set by OFWAT. This set of price controls is designed to enable companies to do the same again, albeit with financial outperformance now being shared with customers.

With the profile of bills for most customers now coming down for the first time, and with the heavy customer engagement in the process, much of the political uncertainty surrounding the sector should now reduce.

Companies can appeal the price control determinations by OFWAT to the Competition and Markets Authority. In the past appeals have been by far the exception rather than the rule. Companies will have 2 months to lodge an appeal, and any appeal will take 6 -12 months. The decision of the Competition and Markets Authority will be binding on OFWAT and the company appealing. Appeals are most likely where there is a material gap between OFWAT's determination and the final business plan submitted by the company. However, OFWAT has embarked on a substantially revised approach in PR14 and companies may wish to challenge some of the methodology. Thames Water and United Utilities have indicated they will look at the decisions carefully before deciding not to accept them.

A special regime exists under the Water Industry Act 1991 to control mergers between water and sewerage companies. The regime is intended to ensure that OFWAT remains able to use comparative benchmarks in its regulation of companies. Too few benchmarks may leave it less able to determine where efficiency and service frontiers lie. Consolidations over a certain size are required to be investigated in depth and must show a net benefit to consumers to be allowed to proceed. Following the attempt by Severn Trent to Acquire South West Water in the mid-1990s, OFWAT and the Competition Commission have approached these rules in a way that makes consolidation difficult, especially for larger operators. OFWAT is out of step with OFGEM (the UK energy regulator) on this issue.

The Cave Review recognised in 2011 that a change in approach had benefits. It suggested that greater capital market competition would encourage greater efficiencies and company driven improvements to services. Greater capital market pressures would deliver water and sewerage services at lower costs through increased pressure on management to improve their services; the more rapid transfer of best practice; greater economies of scale; and, in the case of mergers between neighbouring companies, greater optimisation of resources. Subsequently the Walker Review concluded that the industry's structure looked complex and that mergers could potentially encourage a reduction in operating and overhead costs and possibly more transfers of water between areas. It recognised the importance of comparators but considered that it should be possible to preserve the important comparators with a more flexible regime.

OFWAT itself commissioned a report from Cambridge Economic Policy Associates (CEPA) which examined the extent to which OFWAT could make use of alternative approaches in assessing efficient costs in setting price limits. The report found that these could facilitate changes to the merger regime. This work sits alongside the radical change in approach to regulation of water and sewerage companies that is taking place, which in itself reduces the importance of comparators in regulation.

In these situations, the Competition and Markets Authority must obtain an opinion from OFWAT on those questions and consider OFWAT's view before coming to a decision. OFWAT is obliged to make its assessment using the approach set out in a published statement of methods, which must indicate the criteria and their relevant weighting which it will apply. This should improve predictability for potential acquirers and investors on the likelihood of transaction being possible.

Importantly, the leadership of OFWAT has been refreshed and seems more open to change. Cathryn Ross, OFWAT's Chief Executive, at a City briefing said:

"We also recognise that changes to industry structure may be appropriate. I don't have an industry blueprint that I'm working to, but I would be surprised if 18 vertically integrated water companies were the most appropriate structure. And I want to say clearly that we are open to conversations about changes to that structure."

There will be a limit to the number of consolidation transactions that can take place. First movers may have an advantage. Although the 2014 rules are not yet in force, the old regime is capable of delivering similar results now that attitudes at OFWAT are changing and the Competition Commission has been abolished, with the Competition and Markets Authority now in charge.

From April 2017, all business customers and public sector, charitable and not-for-profit organisations in England will be able to choose their water and sewerage supplier. The market will work in much the same way as in other utility services, where a range of suppliers compete for customers by offering them the best deal. The suppliers will buy wholesale services – infrastructure and treatment - from the former monopolies, which will have to separate their own services and infrastructure businesses. With greater separation of activities and competition in a number of areas as a result of the 2014 Act, there is the possibility of restructuring and consolidation at particular levels of the supply chain as an alternative to acquiring companies in their current vertically integrated form.

In the UK energy markets similar reforms led to a restructuring of the sector with consolidation among suppliers and separation of some infrastructure provision. As companies in the sector focus on where their competitive advantage lies, restructuring in water and sewerage operations may make sense.

The water and sewerage sector in England and Wales has been ossified over the last two decades through a restrictive approach to regulation. That approach is now changing to encourage innovation, which may come through consolidation and restructuring, as much as from changes in regulatory tools and methods. Regulatory barriers to transactions have never been lower.