United States: The Lifespan Of A Rehearing Petition

by Michael F. Qian and Brian Matsui
Morrison & Foerster LLP
Your LinkedIn Connections
with the authors

You've lost your case before a Federal Circuit panel and you file a rehearing petition.  When can you expect good news (or at least some news...)?

For a rehearing petitioner, the threshold positive sign to look for is a call for a response (or "CFR").  Under the federal appellate rules, a party can't file a response opposing a rehearing petition unless the Court requests one.  That request is a sign that at least one judge has some interest in the petition.  Even with a CFR, the overwhelming majority of petitions still get denied.  But since a CFR is a gating requirement for any successfully rehearing petition, we took a look at when you might expect to receive a CFR to your rehearing petition.  (We examined petitions for panel and en banc rehearing since November 2019 that had a CFR.  You can follow these cases with our En Banc Tracker.)

When will the Court make its decision?  We found the CFR comes, on average, about 20 days after the petition is filed.  Then, from the filing of the response to the decision on rehearing, we found the Court takes on average 40 days.

Who's issuing the CFRs?

There are usually two types of CFRs (although it's not apparent from the docket and a bit of an imperfect science).  CFRs that come early typically come from the panel that decided the appeal, as they get first crack at looking at any petition for rehearing, regardless of whether it is styled as a petition for panel rehearing or en banc.  See Internal Operating Procedures (IOP) ##12 & 14.2.  Under the Court's IOPs, the panel has 10 business days to decide what to do, and during that time any judge on the panel can CFR.  See  IOP ##12.1(b), 12.4(b).

CFRs that come later, by contrast, typically come from a judge outside the panel.  Once the panel's 10 business day period expires, the petition goes to the full Court for 10 business days, and any active judge on the Court can request a response.  See  IOP #14.2.

So with that in mind, we decided to take a look at whether and how often the panel versus non-panel members of the Court request a response—that is, take some interest in the case.  We thought panel decisions with dissents likely would get a CFR early by the panel, since the dissenting judge could request one.

To test that hypothesis, we separated the CFRs we've collected into early (14 calendar days or less between petition and CFR) and late (15 days or more).  We chose that dividing line to approximate the 10-business-day line in the Court's IOPs.  (But that approximation is imperfect because holidays can make 10 business days longer than 14 calendar days.  And, of course, we couldn't exactly be certain that early CFRs came from the panel rather than someone from the Court at large.  The IOPs contemplate early circulation of a rehearing petition to the full Court if the panel affirmatively votes not to rehear the case early, but our speculation is that this doesn't happen much.)

Here is what we found: 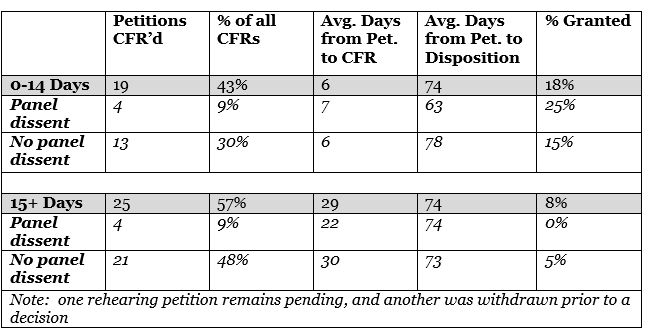 So the $64 question is whether anything can be gleaned from this.  We have to caveat that the sample size is small, and we're looking only at rehearing petitions that received a CFR.  But there were a few surprises.  A large portion of CFRs came early, and thus presumably from the panel that heard the case (43% of all the CFRs we collected).  The panel CFR'd in many cases despite a unanimous merits decision (13 of 19 CFRs).  And whether a member of the panel dissented from the merits decision didn't seem to affect whether the CFR came early (from the panel) or late (from the rest of the Court):  CFRs in cases with panel dissents were evenly split between the two categories.  So surprisingly often, even when there was a panel dissent the petition went to the full Court before the response requests (half of CFRs with panel dissents; none of those petitions were granted).  Finally, and this is really almost certainly a small sample size thing (but still seems interesting), the sooner the CFR, the higher the grant rate.