by Gourdin W. Sirles
Proskauer Rose LLP
Your LinkedIn Connections
with the authors

In a recent decision out of the District of Connecticut, defendants MacBeth Collection, L.L.C, its affiliates, and owner found themselves in hot water when Judge Merriam determined they violated a permanent injunction barring the sale of certain products accused of trademark infringement. At issue was defendants' whale-themed merchandise, which Vineyard Vines accused of misappropriating Vineyard Vines' whale logo. 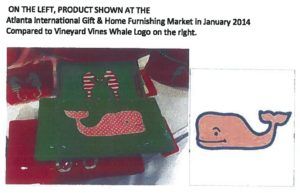 In its order on Vineyard Vines' motion for additional relief, the Court found—as there was no dispute on the point—that defendants got behind on their payments, and that they would have to make those payments. However, Vineyard Vines also asked the Court to order the payment of an additional $20,000 in settlement fees, because "Plaintiff 'informally agreed' to modify the payment schedule in exchange for an additional payment of $20,000 from defendants." According to the Court, that "informal agreement" wasn't enforceable because the parties failed to file a "motion to modify the terms of the Final Judgement" or otherwise put its agreement in writing. The Court also did not enforce the $500,000 liquidated damages clause based on defendants' non-payment of settlement funds. On that issue, the Court concluded that "enforcement of a liquidated damages clause is not automatic," and is indeed inappropriate based on "defendants' failure to pay the full Judgement amount" because such enforcement would be "purely punitive."

However, the Court did enforce the $500,000 liquidated damages clause based on defendants' violation of the injunction. While the Court found insufficient evidence to establish that defendants themselves sold merchandise subject to the injunction, it found evidence that demonstrated—by a preponderance of the evidence—that defendants "enable[d] others to sell or pass off" the infringing items. According to an affidavit submitted with Vineyard Vines' motion, which was also supported by written communications, defendants "informed [a retailer] . . . that the Whale Trademark dispute with Vineyard Vines was resolved, and as such [the retailer] could now sell off the remaining Whale Tote Bags inventory." The Court concluded that the damages resulting from this violation would be "uncertain in amount or difficult to prove" and that "the $500,000 amount agreed upon is not 'greatly disproportionate to the amount of the damage . . . ." This, according to the Court, made enforcement of the liquidated damages clause appropriate.

Finally, the Court ordered defendants to pay Vineyard Vines' costs and attorneys' fees incurred in filing the motion for additional relief, once Vineyard Vines produced sufficient documentation regarding those items. This order was based on the terms of the court's own final judgment, which provided that "in the event Defendants violate this Injunction, breach the Settlement Agreement, or fail to timely pay an installment payment, Vineyard Vines shall be entitled to . . . recovery of its actual expenses, including reasonable attorneys' fees, associated with the enforcement of the Settlement Agreement and this Injunction . . . ."