The Board reversed a Section 2(a) refusal of the mark WILL AND KATE PHOTOGRAPHY for "photograph services" [PHOTOGRAPHY DISCLAIMED], rejecting the USPTO's position that the mark may falsely suggest a connection with William Windsor, aka Prince William, Duke of Cambridge, and Kate Middleton, aka Catherine, Duchess of Cambridge. The evidence failed to establish that "WILL AND KATE" points uniquely and unmistakably to William Windsor and Kate Middleton.  In re Will and Kate Photography LLC, Serial No. 90568132 (May 18, 2022) [not precedential] (Opinion by Judge Peter W. Cataldo).

Section 2(a), in pertinent part, bars registration of "matter which may . . . falsely suggest a connection with persons, living or dead . . . ." Here, the USPTO had to show that:

Under the first factor, based on various webpage references to "Will and Kate," the Board found that "Will and Kate" is a name or identity of William Windsor and Kate Middleton." Noting that the word "photography" is generic, the Board then found that applicant's mark is a close approximation of William Windsor's and Kat Middleton's names or identities.

The next question was whether the proposed mark will be recognized by purchasers of applicant's photography services as pointing uniquely and unmistakably to William Windsor and Kate Middleton. Applicant submitted twelve webpages evidencing that other businesses use the name "Will and Kate" because (like applicant) they are owned by people who happen to be named Will and Kate.

The Board pointed out that the evidence does not point to "widespread" use of "Will and Kate" to refer to William Windsor and Kate Middleton. In fact the evidence suggests that the two are commonly referred to as "William and Kate." 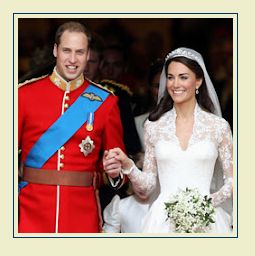 The Examining Attorney pointed out that applicant displays a crown and the phrase "We Treat You Like Royalty" in promoting its services. Applicant responded that this slogan is commonly used by event service providers. The Board sided with Applicant, concluding that applicant's mark does not point uniquely to William Windsor and Kate Middleton.

Given the number of third-party uses of "Will and Kate" formatives for a variety of goods and services, relevant consumers will perceive the designation as identifying couples or pairs of individuals named "Will and Kate." Applicant's use of its mark is similar to the use prevalent among these third parties. Accordingly, the requirement that the name or identity serve to point uniquely to a single entity has not been satisfied.

And so, the Board reversed the refusal.

TTABlogger comment: Suppose that a sub-set of Americans, namely British-Americans, would make the association. Would that be enough to sustain the refusal?