American Airlines applied to register the mark RENOAIR for "air transport of passengers, cargo and freight" under Section 2(f) of the Lanham Act, claiming that acquired distinctiveness transferred to this mark from AA's registration of the same mark for "toys, namely model airplanes." In view of the Section 2(f) claim, there was no issue as to geographical descriptivensess under Section 2(e)(2). The Board found that AA failed to carry the "heavy burden" to establish that acquired distinctiveness will transfer. In re American Airlines, Inc., Serial No. 88298380 (January 11, 2021) [not precedential] (Opinion by Judge Michael B. Adlin]. 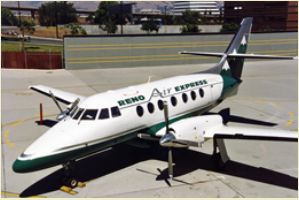 Even without the Section 2(f) claim, the record left he Board with no doubt that  (1) the primary significance of the RENOAIR is the name of a place known generally to the public; (2) the public would make a services/place association, i.e. it would believe that the services  originate in that place ; and (3) the source of the services is the geographic region named in the proposed mark. "The addition of AIR to the term RENO is of no consequence with respect to geographic descriptiveness, as it does not change the geographic meaning of Applicant's proposed mark, being merely descriptive of or generic for Applicant's identified 'air transport' services."

AA pointed to a 2015 Board opinion finding a likelihood of confusion between TWA for airline services and model airplanes. [TTABlogged here]. The Board pointed out that not only was that decision nonprecedential, but it also addressed a different issue. Here, the Board was concerned with whether Applicant AA made a "rigorous" showing that RENOAIR has acquired distinctiveness for model airplanes and that model airplanes are "sufficiently similar or related" to air transport services that the acquired distinctiveness will transfer to air transport services.

The Board concluded that Applicant AA did not meet its heavy burden to show that "any distinctiveness its mark may have acquired for model airplanes will transfer to the air transport services in connection with which Applicant intends to use its proposed mark." And so the Board affirmed the refusal to register.

TTABlogger comment: I'm puzzled by the Board's statement that AA has to prove that the mark acquired distinctiveness for model airplanes. It's registered on the Principal Register, so isn't the mark presumed to be distinctive?