Todd Baker wrote an article for Intellectual Property Magazine entitled "Talking Cars," which will be featured in their October issue.

In many cases, a successful forecast of a technological trend can be accomplished by just following the patents. However, for vehicle-to-vehicle (V2V) communication technology, a review of US patent applications published since 2010 reveals a number of strategic technology choices being made in the Autonomous Vehicle (AV) space, but no clear view of a singular adopted communication standard. Be that as it may, what is clear is that two competing technologies, Dedicated Short-Range Communications (DSRC) – the 802.11p Wi-Fi based standard – and the cellular long-term evolution (LTE)-based Vehicle-to-Everything (C-V2X) technology, being developed by the 3rd Generation Partnership Project (3GPP), are the industry leaders. Many innovators in this space are picking or switching sides. Others appear unwilling to commit to either technology until a market/government decision has been made, pursuing patent coverage sufficiently generic to read on both technologies.

By way of background, C-V2X encompasses communications between an AV and another AV, AV and roadside infrastructure (Vehicle-to-Infrastructure or V2I), and AV and computer networks (Vehicle-to-Network). As we transition from today's technology (eg,radar-based cruise-control systems and lane keeping technology) to fully autonomous vehicles, the development of V2V technology is at the forefront of C-V2X development. Similarly, DSRC enables short-rangeV2V communications using the 802.11p standard.

Since company A's vehicles will have to communicate with company B's vehicles, the adoption of a single technical standard is nearly inevitable, but, until then, DSRC and cellular-based V2V are likely to be developed concurrently. The major players developing this nascent technology are not only automobile manufacturers (eg, Ford, General Motors, and Toyota) and their suppliers, but also include wireless technology providers (eg, Huawei and LG Electronics) and chipmakers/designers such as Intel and Qualcomm.

It is unclear how the interests of these entities will align and the inevitable adoption of a single solution will play out. For example, in 2016, Toyota became the first automaker globally to introduce automobiles equipped with V2V technology. Those vehicles used DSRC and were only for sale in Japan. Along those same lines, the US National Highway Traffic Safety Administration (NHTSA) has been working with the automotive industry and academic institutions for more than a decade to advance V2V communications using DSRC. In contrast, China plans to install wireless communication solutions (C-V2X) on 90% of the country's highways by 2020, according to a strategic plan released by China's National Development and Reform Commission.

A search of the USPTO's patent publication database1 reveals moderate patent activity in the V2V communication space prior to 2015 (assuming that most applications publish 18 months after filing – see Figure 1). This patent survey will determine whether automaker filings are consistent with their public proclamations adopting DSRC or C-V2X, and will also review filing activities of wireless-device makers and chip designers. Lastly, since many of these applications are being written for the purpose of reading on a standard, patent application preparation and prosecution considerations are discussed.

3GPP is a collaboration agreement bridging a number of telecommunication standards bodies. LTE is developed under the 3GPP and enables vehicles to communicate their geospatial coordinates to each other directly when in low-or no-connectivity range up to 100 meters. Also, the vehicles can communicate indirectly through the cellular LTE network when connected at a range of up to 500 meters. Both the direct and indirect options help avoid collisions as the vehicles are aware of each other by using broadcast short messages.2

The alternative standard, 802.11p (developed by IEEE), relies upon DSRC, a US Department of Transportation-based project (referred to as ITS-G5 in Europe). DSRC allows vehicles to broadcast and receive omnidirectional messages (up to 10 times per second), creating a 360-degree "awareness" of other vehicles in proximity. Vehicles equipped with appropriate software can use the messages from surrounding vehicles to determine potential crash threats as they develop.3

Ford was an early adopter of V2V technology for collision avoidance purposes and is firmly entrenched in the C-V2X camp. Although many of its filings have been C-V2X specific, Ford has filed numerous applications which are neither limited to C-V2X or DSRC. For example, US patent 10,275,043 is directed to a generic communication module for V2V communication including a controller configured to determine (eg, via V2V communication) a vehicle type or classification of the lead vehicle. If the lead vehicle is not a semi-truck, an emergency vehicle and/or other vehicle that is required to travel at a slower speed, the controller sends an alert to the lead vehicle (eg, via V2V communication) indicating that it is traveling slowly.

Consistent with its public adoption of the DSRC standard, Toyota has consistently filed applications directed to its implementation. One of Toyota's representative patents, US patent 10,013,877, is directed to a system for providing a notification of a traffic obstruction based on wireless vehicle data included in a DSRC message. Another top filer,GM, has obtained patents for nine of the 11 applications it has filed in this space. However, GM has published only two applications since 2015 for this niche technology and the majority of those applications appear to be directed to broadcast authentication schemes and message authentication generically applicable to both DSRC and cellular-based V2V communications.

According to the search results, LG and Huawei are top filers. Not surprisingly, both companies are seeking protection for cellular-based,V2V-based technologies. LG continues a longstanding relationship with Qualcomm one of the largest manufacturers of wireless-baseband chipsets. Meanwhile, in Europe, Bosch, Huawei, and Vodafone Germany have successfully tested the usage of C-V2X.4 Huawei has also teamed up with Audi, BMW, Daimler, Ericsson, Intel and Nokia to create the 5G Automotive Association (5GAA).

Qualcomm, a leading filer of all companies revealed in the search, is squarely in the C-V2X camp with LG Electronics. Intel's membership of the 5GAA indicates the same choice. However, many of Qualcomm's earlier filings (eg, USP 9,584,954) were directed to DSRC technology. It is unclear why Qualcomm recast its patent strategy and committed to the C-V2X standard. In any event, with the Trump administration's failure to mandate the adoption of DSRC, C-V2X appears to be gaining momentum and other companies like Qualcomm may change course accordingly.

As the sector advances, innovators in the V2V communication industry will follow the government's lead with patent protection in tow. Decisions will be made whether to pursue claims which read on the adopted standard, and further development of that standard will follow. An inherent aspect of that development will be drafting and updating a technical standard specification such as 3GPP which will require participating companies to serve on work groups where technical concepts are shared and developed. With Release 16 of the 3GPP specification expected in December 2019, an uptick in V2Xrelated patent filings by the participating companies, among others, can be anticipated. Companies which especially value patent procurement will likely stake out their IP boundaries by filing patent disclosures prior to attending work group meetings or no later than publication of the technical standard specification and related information.

The work group meetings are collaborative by nature and thus the potential for the development of joint IP is expected. Because of the collaborative nature of the work, participating companies should have an understanding of current derivation jurisprudence and be knowledgeable of its deficiencies. Under the America Invents Act, the Patent Trial and Appeal Board (PTAB) has required complete identity between the subject matter recited in a patent claim of an accused party and the substance of communication provided to the accused by the party charging derivation.5 Thus, even if the difference between the claimed subject matter and the substance of the communication is obvious, derivation cannot be proven. Accordingly, absent a joint research agreement (JRA) which provides contractual protections from derivation, companies should be prudent and disclose their innovation (eg, at the USPTO) as early as possible or refrain from participating in collaborative environments. In addition to the derivation safeguards, JRAs can be used under 35 USC §102(c) to remove references prepared by collaborative partners as prior art available to be applied during examination.

If a patent includes at least one claim defining subject matter which must be used to comply with a standard, then the patent is a standard-essential patent (SEP). After a technical standard is adopted, patents with claims reading on the standard can be leveraged in a variety of ways. If the patent owner is a member of a standard, it will often be required to disclose and grant licences to their patents and pending patent applications presenting claims that read on the standard. Nonmembers of the standard obtaining relevant patent coverage may demand or sue for royalties from companies that adopt the standard. In either case, patent prosecutors tasked with writing claims reading on standards are often challenged to thread a very fine needle bound primarily by the scope of the standard and prior-art public disclosures related to the standard itself.

1. The search string used was abst/("v2v" or "dsrc"). A handful of returns were removed for being unrelated to vehicle communications leaving 225 published applications filed since 2010.

Figure 1: US Patent activity over the past 10 years (source: USPTO) 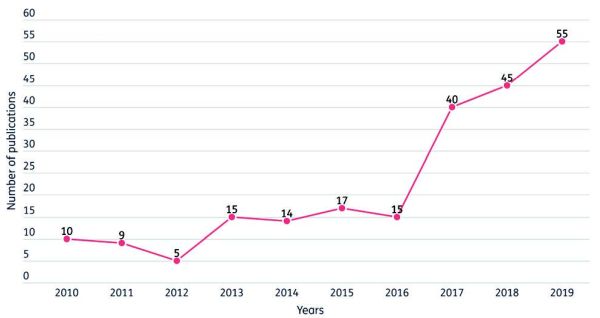