PatentNext Summary: Artificial Intelligence (AI) typically involves certain common aspects such as training data and AI models trained from that training data. Nonetheless, a recent Patent Trial and Appeal Board (PTAB) decision found that it is not always obvious to combine these common aspects to render an AI-based medical device invention unpatentable.

Artificial Intelligence (AI) typically involves certain common aspects. This includes, for example, training data, AI training algorithm(s) that use the training data to train an AI model, and predictions and/or classifications as output from the trained AI model.

Could a person of ordinary skill in the art (e.g., a computer scientist) find it obvious to combine these common aspects to arrive at any given AI-based invention?

As an overview, the '959 patent describes an AI-related and medical device-related invention that uses Support Vector Machines (SVM) and Recursive Feature Elimination (RFE) for selecting genes capable of accurately distinguishing between medical conditions.

The '959 patent describes the identification of a determinative subset of features within a large set of features. Such identification is performed by training the SVM to rank the features according to classifier weights and where features are removed to determine how their removal affects the value of the classifier weights. Id. "The features having the smallest weight values are removed, and a new support vector machine is trained with the remaining weights." '959 Patent, Abstract. "The process is repeated until a relatively small subset of features remain that is capable of accurately separating the data into different patterns or classes." Id.

Figure 2 shows a flowchart for using a support vector machine (SVM) in accordance with the '959 patent. 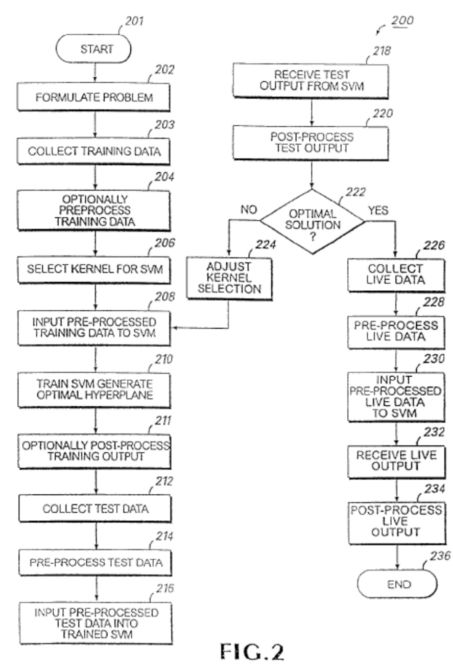 As shown in Figure 2, the SVM is trained using training data to generate an optimal hyperplane. '959 Patent at 16:51-17:4. Test data is input into the trained SVM "to determine whether the SVM was trained in a desirable manner." Id. at 17:11-13. If not, the kernel selection is adjusted at step 224, and the training process is repeated from step 208. Id. at 16:47-57. After the optimal kernel is selected, the SVM is further optimized through feature selection to reduce the dimensionality of feature space. See id. at 26:20-33.

The '959 patent uses RFE, where the feature corresponding to the smallest weight in the new classifier is eliminated, and at each iteration, a new classifier is trained with the remaining features. Id. at 52:52-64.

Claim 1, which is representative claims-at-issue, and that recites an SVM ("support vector machine" (bolded)), is reproduced below.

identifying a determinative subset of features that are most correlated to the patterns comprising:

(a) inputting the data into a computer processor programmed for executing support vector machine classifiers;

(b) training a support vector machine classifier with a training data set comprising at least a portion of the sample set and having known outcomes with respect to the patterns, wherein the classifier comprises weights having weight values that correspond to the features in the data set and removal of a subset of features affects the weight values;

(c) ranking the features according to their corresponding weight values;

(d) removing one or more features corresponding to the smallest weight values;

(e) training a new classifier with the remaining features;

(f) repeating steps (c) through (e) for a plurality of iterations until a final subset having a pre-determined number of features remains; and

generating at a printer or display device a report comprising a listing of the features in the final subset, wherein the final subset comprises the determinative subset of features for determining biological characteristics of the sample set.

Petitioner's Grounds and Prior art

The Petitioner asserted two grounds of invalidity, both pursuant to Section 103.

The two grounds each relied on three prior art references that together taught all of the claim elements of the '959 patent:

In particular, Petitioner had argued that skilled artisans would have been motivated to combine elements of these prior art references to arrive at the claimed invention.

PTAB's finding of No Motivation to Combine

Even though the prior art references taught all elements, the PTAB held that the Petitioner failed to show that a skilled artisan would have combined the prior art in the manner cited by the '959 patent's claimed invention.

The PTAB based its decision on Personal Web Techs., LLC v. Apple, Inc., 848 F.3d 987, 993 (Fed. Cir. 2017), where the Federal Circuit had found that even though a skilled artisan may have understood that a set of prior art references could be combined in a specific claimed manner, it is not enough; instead, it must be shown a skilled artisan would have known to pick out the set of prior art references and combine them to arrive at the claimed invention. IPR2021-00552, Final Written Decision at 31.

The PTAB had agreed with the Petitioner that the prior art references could be combined.

However, the PTAB found that the Petitioner had nonetheless failed to provide sufficient evidence showing that a skilled artisan would have been motivated to do so

[W]e are not persuaded by Petitioner's evidence and contention that a skilled artisan would have had a motivation to modify Kohavi's wrapper method to rank the SVM features according to their corresponding weight values as [recited by the claims].

In particular, the PTAB found that the Petitioner's evidence and reasoning demonstrated "nothing more than a skilled artisan, once presented with the separate pieces of highlighted information in Kohavi, Boser, and Hocking, may have understood that they could be combined in the manner claimed." Id. at 27.

In particular, even though all elements of the claims-at-issue were found in the prior art and where a skilled artisan may have understood that such elements could have been combined, the PTAB found that there was no evidence provided that showed that a skilled artisan would have made the combination as claimed by the '959 patent. At most, "the combined Kohavi/Boser/Hocking disclosures suggest that a skilled artisan, once presented with the separate pieces of highlighted information from those references, may have understood that they could be combined in the manner claimed, but that is not enough because Petitioner has not shown persuasively why a skilled artisan would have known to pick out those three references and combine them to arrive at the claimed invention." Id. at 31 (citing Personal Web Techs., LLC v. Apple, Inc., 848 F.3d 987, 993 (Fed. Cir. 2017)).

It should be noted, however, that the decision was split 2-to-1, where Judge Garth D. Baer broke from the majority in dissent.

Because of this, Judge Baer agreed that the claimed invention '959 was nothing more than an obvious combination of known techniques applied to a known device, yielding only predictable results and thus obvious under KSR's framework. Id. at 42.