PatentNext Summary: Software-based medical devices that focus on "data processing" can be patented. However, a patent practitioner should exercise care when drafting such claims. Otherwise patent eligibility issues can arise. This article demonstrates countervailing Federal Circuit decisions that reached opposite patent eligibility conclusions for a pair of "data processing" medical device  patents asserted by Cardionet, LLC against Infobionic, Inc.

The below article provides additional details. This article forms the second part of a multi-part series. The first part, focusing on patent-eligible software-based medical devices (i.e., "particular machines" and those having "underlying improvements"), may be found here: Patenting Software-based Medical Devices (Part 1).

These two categories are:

SiMD based innovations typically direct to, or incorporate, "physical machines" (e.g., physical components or medical equipment) that the courts and UPSTO have repeatedly found as patent-eligible.

On the other hand, SaMD based innovations typically direct to, or incorporate, less physical aspects, such as data processing, guiding human actions, and laws of nature, which the courts and UPSTO have repeatedly found as patent-ineligible.

The below illustration summarizes this hierarchy, from a best-to-worst ordering:

Across each of these categories an opportunity arises to demonstrate patent eligibility where an inventive software-based medical device is described as providing an "improvement" to an underlying computing device (e.g., underlying medical device). For a general discussion of how to patent software inventions based on an "improvement," see the related article: How to Patent Software Inventions: Show an "Improvement"

This article will explore the third  of these categories (i.e.., "data processing"). Part 1 of this article series explored the first two.

This article will compare these cases and explore how to draft claims for software-related inventions that involve "data processing."

With respect to the claim of the patent in Cardionet  II (claim 20, as shown above), the Federal Circuit found the claim patent ineligible.

The Federal Circuit found claim 20 directed to the "abstract idea of filtering data." At issue was a data filtering step directed to a "T wave." A T wave is a type of cardiac signal that appears in an electrocardiogram ("ECG"). An ECG plots the heart's electrical signals as different waveforms on a graph, which includes P, R, and T waves. Figure 3 and 4 of the patent (reproduced below) illustrate T-waves (as highlighted in red circles): 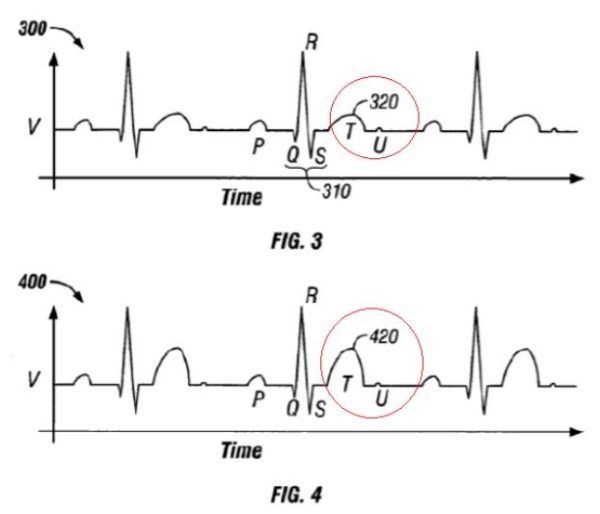 According to the patent, T waves can cause errors in existing heart monitoring devices. For example, the specification explains that in a normal heartbeat, the R wave is taller than the T wave (as shown in Figure 3 above). However, some patients have "abnormal[ly]" tall T waves (as shown in Figure 4 above). As a result, the ECG may mistakenly classify them as R waves. Because of that misclassification, the ECG can incorrectly report an inaccurately high heart rate.

Thus, the patent's claims directed to "data processing" of an ECG e.g., i.e., with claim 20 reciting of "activat[ing]" the "T wave filter" to "preprocess[] a cardiac signal," in order to filter our the T wave.

The patentee tried to argue that claim 20 was akin to claim 1 of Cardionet I, which was found to be patent-eligible. However, the Federal Circuit disagreed: "[t]hat case (involving the same parties here) concerned a patent with claims to a system that detects different types of cardiac arrythmias by measuring heartbeat variability."

The Federal Circuit distinguished Cardionet I and II by focusing on the difference in prior art use: "[i]mportantly, [in Cardionet I] we observed that there was no intrinsic evidence that the claimed technique had ever been used." By contrast, T-wave filters, which were at issue in Cardionet II, had existed in the prior art.

No Underlying Improvement to a Computing Device

The patentee also argued that the patent directed to an improvement. However, the Federal Circuit disagreed.  Instead, according to the court, claim 20 merely recited "a general-purpose computer to carry out the abstract idea of filtering data."

Moreover, the specification failed to describe how such activity demonstrated an "improvement" to an underlying computing device. Instead, according to the court, the specification merely directed to general purpose "data processing": "the specification explains that the very purpose of the invention centers on using the T wave filter to filter data."

The court reiterated the test for patent-eligibility, which claim 20 failed to meet: "[t]o qualify as a patent-eligible improvement, the invention must be directed to a specific improvement in the computer's functionality, not simply to use of the computer 'as a tool' to implement an abstract idea."

Accordingly, the Federal Circuit found that: "at bottom, filtering the data requires only basic mathematical calculations."  And "such calculations, even if groundbreaking, are still directed to [a patent-ineligible] an abstract idea."

Finally, the patentee argued that the recitation of a machine (i.e., the cardiac apparatus of clam 20) demonstrated that the claim was patent eligible under the machine-or-transformation test.

The fact that the T wave filter was recited as part of an apparatus did not save the claims: "To the extent that formulating a claim in the form of an apparatus insulates it from an ineligibility attack if it only recites conventional components for performing an abstract idea, the Supreme Court has closed that door, at least for now."

Thus, without finding an "improvement" to an underlying computing device, or use of a "particular machine," the court found the patent-at-issue patent ineligible.

Practice tip: When drafting claims for software-based medical devices that involve "data processing," such claims should include one or more elements that can be used to demonstrate an underlying improvement to an underlying computing device, or otherwise operate on a "particular machine" (and not a mere general purpose computer). Otherwise issues as to patent eligibility can arise.