We examined how decisions from the last quarter of 2020 compare to pre- and post-Octane trends, in addition to trends across all types of sanctions in patent cases awarded under all sources of authority. This includes Rule 11 sanctions, sanctions awarded pursuant to courts' inherent authority, 28 U.S.C.A. § 1927 fees, and discovery sanctions.

Ultimately, we found that Octane Fitness has not considerably changed the rate that courts grant sanctions and motions for attorney fees, a trend that has remained consistent through the last quarter of 2020.

Section 285 allows courts to grant attorney fees to the prevailing party in exceptional patent cases. Before Octane Fitness, Federal Circuit precedent limited the application of Section 285 to objectively baseless cases that were brought in subjective bad faith or to cases that involved litigation misconduct of an independently sanctionable magnitude.

In Octane Fitness, the Supreme Court explained that the Federal Circuit's standard was too strict, as it rendered § 285 largely superfluous. According to the Supreme Court, attorney fees were already available when the losing party acted in bad faith, vexatiously, wantonly or for oppressive reasons, e.g., under courts' inherent authority or other statutes.

Carving out § 285 from other fee-shifting mechanisms, the high court determined that § 285 fees may be awarded against a party that acts in an objectively baseless way or in subjective bad faith.

Likewise, the Supreme Court permitted courts to award fees in any case in which a party's unreasonable conduct is exceptional and "stands out" - regardless of whether the conduct is independently sanctionable. Finally, the Supreme Court rejected the Federal Circuit's clear and convincing standard and opted for the ordinary preponderance of the evidence standard.

Following Octane, from 2015 to 2019, patent case filings declined3 while the number of motions for attorney fees under § 285 filed each year increased compared to pre-Octane levels.4 Among motions for fees under § 285, though, pre- and post-Octane grant rates do not differ substantially.

In the years immediately preceding Octane, courts granted (in part or in full) approximately 30% of motions for fees under § 285.5 Grant rates varied in the years following Octane but have leveled off to about 33%.6 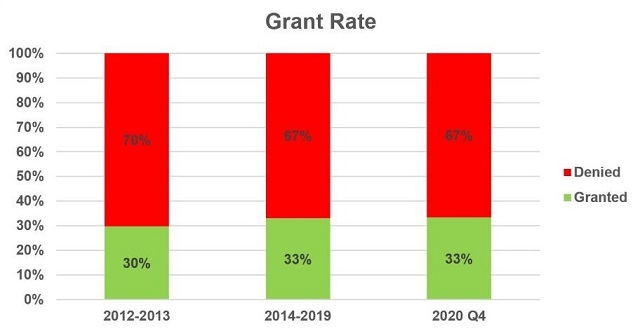 The data for this quarter looks strikingly similar. In the last quarter of 2020, district courts granted 33% of § 285 motions (excluding decisions calculating fees or requesting additional briefing). As with other data in the years following Octane, in the last quarter of 2020, the U.S. District Court for the District of Delaware decided more § 285 motions than any other court. 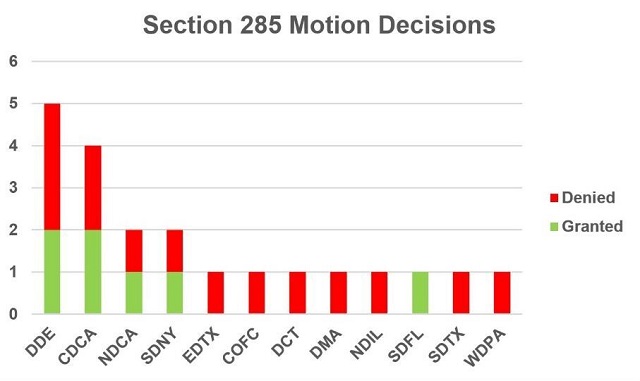 In total, courts adjudicated 21 motions for attorney fees in the last quarter of 2020. This is a slight downturn from the over one hundred § 285 motions decided each year following Octane. The downturn is particularly notable in light of an uptick in patent suit filings this year, which saw more patent cases than any year since 2015.

Trends in sanctions and fee shifting under other mechanisms

But § 285 is not the only avenue for obtaining attorney fees. Litigants can also turn to 28 U.S.C.A. § 1927, Rule 11 or a court's inherent authority. This may happen, for example, when the party seeking fees is not technically the "prevailing" party under § 285, which is only available to the prevailing party (e.g., in some circumstances where the plaintiff voluntarily dismisses its complaint).7

Section 1927 gives courts discretion to award sanctions against an attorney that unreasonably and vexatiously multiplies proceedings. This can include any excess costs, expenses and attorney fees caused by the conduct.

Rule 11 allows for both monetary and non-monetary sanctions, including attorney fees, that can be assessed against the opposing party or attorney. To move for sanctions under Rule 11, though, a litigant must typically follow proper procedure.

The litigant must serve a Rule 11 notice on opposing counsel and give the party 21 days to withdraw the offending filing. Notice must also be given at least 21 days before resolution of the case or offending filing, which further limits Rule 11's availability.

When Rule 11 and § 285 are not available, a court may still award sanctions, including attorney fees, under its inherent authority. To impose sanctions of attorneys under inherent authority, a court generally must find that a party acted in bad faith - a higher bar than Rule 11's objective reasonableness standard (though non-fee shifting sanctions under a court's inherent authority may not require a finding of bad faith).8 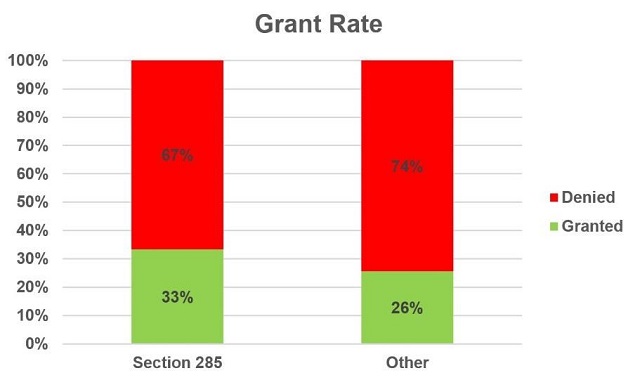 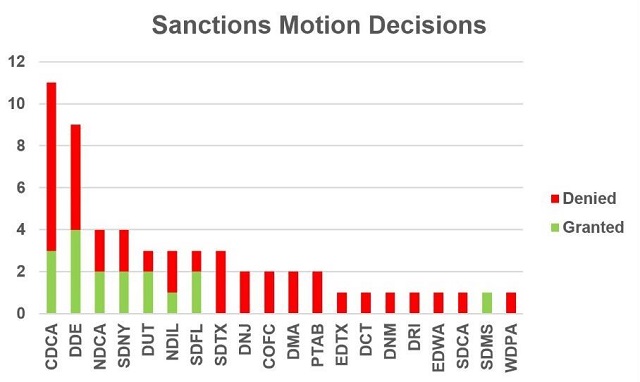 Realtime Adaptive Streaming LLC. v. Netflix Inc.9 provides a good example of conduct that leads to fee shifting under § 285. In November of 2017, Realtime sued Netflix for patent infringement in Delaware.

Netflix filed a motion to dismiss, arguing in part that four of the six asserted patents were directed to patent ineligible subject matter. The magistrate judge recommended granting Netflix's motion for invalidity.

While the magistrate judge's report was pending before the District Court, that same District Court judge invalidated five related patents owned and asserted by Realtime in a parallel case. Shortly thereafter, Realtime filed a motion to dismiss their case against Netflix without prejudice.

On the same day Realtime moved for dismissal in Delaware, the company filed a pair of cases in the Central District of California, asserting in part the same four patents. Netflix moved to transfer the California cases to Delaware and for an award of attorney fees. After both Realtime and Netflix spent significant time briefing the motions to transfer, Realtime moved to voluntarily dismiss both cases.

The court still considered Netflix's motion for attorney fees under §285. The court first considered whether Netflix was the prevailing party. Ordinarily, though not always, a voluntary dismissal without prejudice does not create a prevailing party, since the underlying matter is not adjudicated on the merits, and the plaintiff remains free to refile at any time.

However, under the Federal Rules of Civil Procedure, a second voluntary dismissal of the same claim is treated as "an adjudication on the merits."10 Considering the issue as a matter of first impression for the Central District of California, the court concluded that Netflix qualified as the prevailing party for the purposes of sanctions.

The court noted that Realtime only dropped the Delaware litigation when it became apparent that the court in Delaware would not be issuing a favorable ruling, and then immediately refiled a functionally identical lawsuit in a forum it initially opposed a transfer to. The circumstances suggest Realtime was engaged in impermissible forum-shopping and supported a finding of exceptionality.

Ultimately, the court awarded Netflix $409,402.50 in attorney fees and costs it incurred defending the California litigation.

Anderson initially served as local and lead counsel, while the early case filings indicated that Rabicoff's "Pro Hac Vice admission [was] to be filed." Cedar Lane filed two amended complaints without first obtaining permission under Rule 15 of the Federal Rules of Civil Procedure.

When Blackmagic moved to strike the improper amended complaints, Cedar Lane responded that Rule 15 allowed a filing of amended complaints as a right whenever a motion to dismiss was filed - an argument the court called "objectively frivolous."

Rabicoff and Anderson also failed to attend the hearing for Blackmagic's motion to strike. When the court ordered the pair to show cause as to why they should not be sanctioned, Rabicoff blamed his failure to appear on the court's lack of notice, and Anderson admitted to not having read Cedar Lane's opposition brief to Blackmagic's motion to strike before signing. Finally, at the hearing on the motion to show cause, the attorneys admitted Rabicoff had been serving as lead counsel for the duration of the lawsuit.

The court concluded this case was likely not the first time Rabicoff served as lead counsel while skirting pro hac vice requirements. After requiring Rabicoff to supply the court with his litigation history in the Northern District of California over the previous five years, the court found 29 cases where Rabicoff appeared as lead counsel but did not seek pro hac vice admission or pay the proper fees for applying for admission.

Ultimately, the court sanctioned both attorneys under Rule 11 for frivolous arguments, and further sanctioned Rabicoff under its inherent power for making misrepresentations to the court. Rabicoff was further referred to the Northern District's Standing Committee on Professional Conduct for possible violations of Civil Local Rule 11-3, which requires attorneys regularly appearing before the Northern District of California to be admitted to practice in the district and not appear pro hac vice.

The disclosure appeared to have happened as part of discussions between the legal teams for SIMO and its subsidiary over how to maintain consistency in parallel actions in the United States and China. However, the court maintained that the limitation to "this action" in the protective order meant "this action" and did not include related cases. The court sanctioned SIMO to the tune of $40,000.

The lower bar for sanctions under § 285 established by Octane Fitness has not appreciably changed the rate at which courts sanction parties or their counsel. Motions for sanction or attorney fees continue to be granted at around a 30% rate (under § 285 and otherwise). And while the frequency of § 285-motions increased following Octane Fitness, this trend appears to have cooled off in the fourth quarter of 2020.