GROWING GAS DEFICITS AND DECREASING CONVENTIONAL RESOURCES ARE DRIVING AN INCREASE IN THE EXPLORATION AND MONETISATION OF UNCONVENTIONAL OIL AND GAS RESOURCES IN THE GULF COOPERATION COUNTRIES (GCC). HERE WE ASSESS THE HIGH-LEVEL MARKET DRIVERS, OPPORTUNITIES AND CHALLENGES OF DEVELOPING THESE RESOURCES.

THE RISE OF UNCONVENTIONALS

In addition to the conventional oil and gas reserves that have so far been the backbone of GCC economies, it is believed that significant unconventional resources also exist (billions of barrels of oil and trillions of cubic feet of gas; see on page 10).

These deposits –shale and tight oil and gas –have been on the radar of the oil and gas industry for some time but in recent months there has been a noticeable uptick in activity regarding the exploration and future commercialisation of unconventionals.

The scale of these resources, and the fact that the transformative potential of shale oil and gas has been proved by events in the US in recent years, is now providing renewed momentum to their development

One other driver that is more unique to the GCC region is the need to address growing gas supply deficits as power demand expands rapidly. There is a clear economic and environmental rationale for bringing on more gas production and more power generation because, in some instances, crude oil is being burned to meet peaks in power demand.

In addition to the power sector, the GCC economies also have gas needs from the upstream, petrochemical and LNG industries.

In petrochemicals, gas demand is also forecast to rise due to a general downstream enhancement strategy amongst regional NOCs, and in the UAE and Oman, unconventional gas production can be used to meet LNG export commitments.

Unconventional resources led to a revolution in the US energy industry, bringing with it growing energy independence, an enormous economic windfall and a stronger geopolitical position through burgeoning exports in both oil and gas (LNG).

These benefits have not gone unnoticed by other countries, and nascent shale industries are taking root in Argentina and China, as well as the GCC. The unique factors at play in the US will not be repeatable in other jurisdictions, although that is not to say that unconventionals cannot thrive outside of the US in jurisdictions such as the GCC.

In the GCC, we see certain advantages that should be attractive to foreign investors. The first of these is the potential to leverage the privileged position of local NOCs in the market to expedite development and provide an overarching vision and direction, as well as plentiful capital, both on the balance sheet and in the ability to borrow at favourable rates due to strong credit ratings to support the industry when in its infancy.

An interesting parallel to this is Qatari LNG. Here, Qatar Petroleum was able to attract key IOCs, Shell and ExxonMobil, and then provided the opportunity, capital and all approvals to construct a world-leading LNG business along with uniquely large "mega" liquefaction trains and tankers. In unconventional development, it is clear that major IOCs are the partner of choice, rather than the smaller independent players that powered the US shale industry. 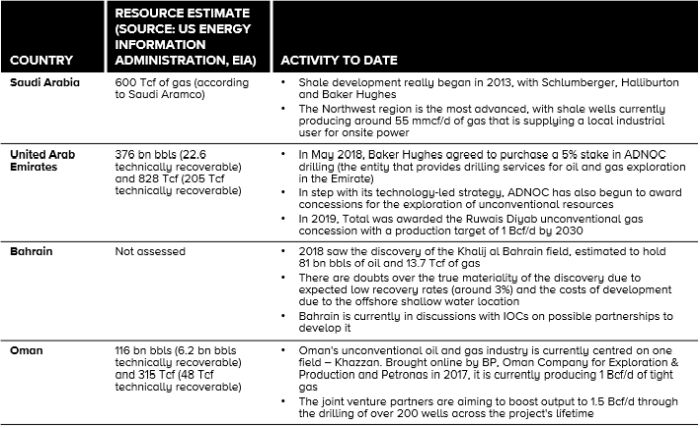 NOC/government control over concession areas can provide explorers with the space required to build up significant scale.

With fracking technology now allowing for well (or lateral) lengths of up to 10,000 feet, the GCC can offer the kind of conditions needed to repeat this on a massive scale that is not always available in the US.

Another advantage is lower market-side pressure than you see in the US, as market prices are generally set by the respective governments, there is more of a buffer around break-even production costs, and in many cases there is a single government buyer on the demand side. This provides a more benign market environment as the industry is in the early stages of development, where the focus is on experimenting and seeking out the most prospective areas or plays, and costs are still coming down.

Additionally, with significant oil and gas infrastructure in place, there are opportunities for realising operational synergies to reduce cost and complexity.

CHALLENGES OF A NASCENT INDUSTRY

Building up a new industry will not be without difficulty and we see particular areas of challenge that GCC NOCs and their partners will need to overcome.

The unique technical requirements of exploiting unconventional resources could create a significant test for GCC countries. The first is water; the average US shale well needs 4.3 million gallons for fracking a single well. To put this into context, Saudi Aramco currently uses approximately 15 million gallons of water per day to maintain its production of 10 mbpd.

The other key requirement for drilling are proppants, grain-like compounds that work to force open the fracks and release the oil and gas. Although there is no shortage of sand in the GCC, it is not the most effective proppant and either ceramic beads or sandstone is preferable.

To overcome these issues, technological innovation will be needed on areas such as how to use recycled water, rather than fresh, and to find the chemical compounds that can be added to sand to improve its properties as a proppant.

This leads us to the other challenge: making sure the knowledge transfer from the oil field service companies to the domestic NOCs is efficient and effective. This will require careful management as well as the right kind of secondment agreements, technology licensing, joint research and development schemes and all of the associated IP protections to facilitate such knowledge transfer.

Another obstacle that the GCC will need to navigate is how to replace the scale and diversity of the US shale industry. Currently it is estimated that there are over 200 operators across the 30 counties that make up the Eagle Ford in Texas. The progress sparked by this diversity will need to be found instead by more concentrated development by fewer, larger organisations.

Finally, there needs to be a mindset shift around fiscal terms. Individual ownership of mineral rights in the US was another key catalyst to the success of shale, as it reduced complexity around fiscal regime and opened up shale to a wide range of E&P companies. For other jurisdictions like the GCC, national resource ownership will require the creation of new frameworks that will need to sit alongside those in place for conventional resources, as well as the institutional capability to design, implement and then manage what will probably become evolving fiscal frameworks.

To effectively encourage investment into unconventionals, host governments will need to recognise the different capital model involved. This is based on the operational requirement for drilling large amounts (with sharper decline rates) of wells in a manufacturing-like model to build production, rather than the conventional oil and gas development approach that entails a smaller number of higher volume wells and then a more gradual decline curve in output.

Due to the necessary experimentation in the early stages of building an unconventional industry, host governments will need to strike the right balance of tax, royalties and profit to attract early investment, as well as ensure financial benefit to the state.

THE DIVERGING PATH AHEAD

There have been some encouraging signs that NOCs in the GCC are adopting robust strategies for exploiting unconventional resource endowments.

It is too early to assign any kind of probability to significant growth or to predict exactly the path the industry will take in these jurisdictions -something we have learnt from the often unpredictable evolution of shale in the US.

What is becoming more apparent are the different approaches and strategies being implemented. On one side, Saudi Aramco and ADNOC have adopted a partnership-led approach with major IOCs and oil field services companies to build a significant unconventional industry.

Saudi Aramco was recently reported to be considering making an investment into Equinor'sUS shale operations, either as a joint venture or by buying a stake. This would provide important knowledge transfer for Aramco as it sets its sights on developing its unconventional resources in the Kingdom and building on the research centres opened by oil field services companies such as Schlumberger.

ADNOC has begun awarding acreage to IOCs such as Total, with more expected as the results of a first round of exploration becomes clear, alongside closer integration with oil field services companies such as Baker Hughes.

Oman and Bahrain appear to be taking a slightly different approach, bringing in IOC expertise to develop specific reserves that have been discovered, rather than taking a more blank piece of paper approach for the development of a wider industry. This may change if it becomes clear the resource base is large enough to require a different approach.

We are optimistic that under a stable oil price environment and the growing need for domestic gas production, unconventional oil and gas industries can take root and flourish in the GCC, creating inclusive value for their respective populations.

In the meantime, as unconventional exploration and development gathers pace, we see opportunities for IOCs, oil field services companies and financial investors to get in on the ground floor of an exciting new phase of the oil and gas industry in the Middle East.