United States: It's Not Much, But It's A Start: The Regulators Freeze Certain Capital Requirements

On August 22, 2017, the Office of the Comptroller of the Currency (the "OCC"), the Federal Deposit Insurance Corporation (the "FDIC") and the Board of Governors of the Federal Reserve System (the "FRB") (the OCC, FDIC and FRB collectively, the "Agencies") issued a proposed rule that would delay the effectiveness of certain rules which were designed to implement the Basel III capital standards (the "Proposed Rule"). Specifically, under the Proposed Rule, the Agencies are proposing to freeze certain transition and phase-in periods of Basel III capital standards relating to mortgage servicing rights, certain deferred tax assets and investments in certain unconsolidated financial institutions. The Agencies have specifically stated in the Proposed Rule that they expect in the near term to issue a separate proposal to simplify the regulatory capital treatment of the foregoing items. As a result, the Proposed Rule will allow most banks to avoid the burden of changing the capital treatment of these items as of January 1, 2018 while the Agencies draft the separate proposal to simplify the capital treatment of these items.

In 2010, in the depths of the recession, Congress mandated enhanced bank capital requirements as part of the Dodd-Frank Wall Street Reform and Consumer Protection Act (the "Dodd-Frank Act"). Specifically, the Collins Amendment to the Dodd-Frank Act amended the definition of capital and established minimum capital and leverage requirements for bank subsidiaries, bank holding companies and systemically important nonbank financial companies.

In July of 2013, the Agencies announced the final rules for implementation of the Basel III international regulatory framework, which was produced in 2010 by the Basel Committee on Banking Supervision at the Bank for International Settlements (the "Basel Capital Rules"). For the first time, the Basel Capital Rules sought to identify and bolster capital at the consolidated level, rather than at the bank level. The idea being that bolstering capital at the consolidated level would likely help the holding company absorb losses when a subsidiary financial institution finds itself suffering financial pressure.

The Proposed Rule would indefinitely delay the transition and phase-in periods of these new capital requirements, while the Agencies prepare the separate proposal to simplify the capital treatment of these items and meaningfully reduce the regulatory burden on community banking organizations.

Does the Proposed Rule impact my financial institution?

What does the Proposed Rule change?

If finalized, the Proposed Rule wouldn't really change anything, rather it would freeze certain provisions of the Basel Capital Rules. This would have the result of keeping the current regulatory capital treatment for MSAs, DTAs and certain investments in financial institutions in place. The below table compares the impact of the Proposed Rule to the Basel Capital Rules. 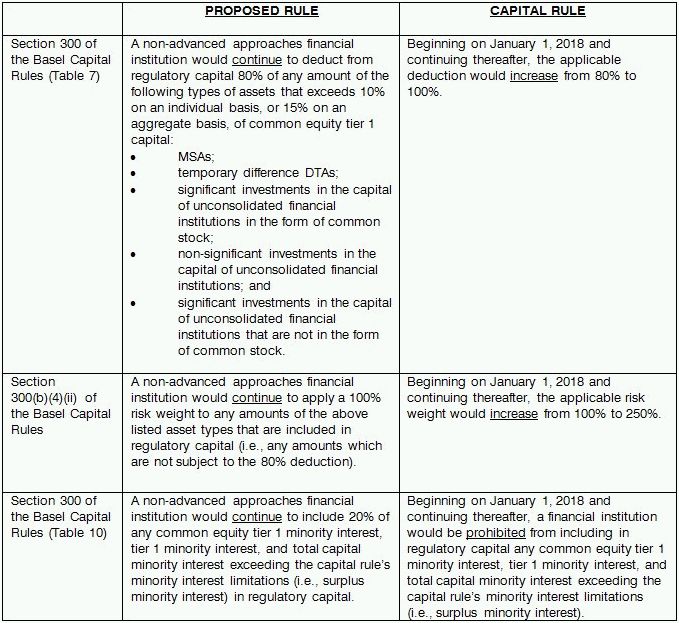 What is the timeframe for finalization?

The Proposed Rule is subject to a 30-day comment period, which will begin once the Proposed Rule is published in the Federal Register. The final implementation date has not been specified, but is expected prior to December 31, 2017.

What does this mean for your institution?

Although regulatory relief is currently moving slowly in Congress, as noted above, the Agencies are working on a separate proposal to simplify capital treatment of the foregoing items. In addition, the community banking industry's regulatory relief chorus continues to grow in Washington. With the Proposed Rule's announcement, Thomas M. Hoenig, FDIC Vice Chairman, declared that he hopes the Proposed Rule "...is the first step in a more comprehensive approach to simplifying and easing the regulatory burden for community banks." A sentiment no doubt shared by the vast majority of the community banking industry.

While the Proposed Rule's level of regulatory relief will not make all community banks call for an immediate celebration, one thing is for sure – it is a start.

To view the full text of the Proposed Rule, click here.