by K2 Integrity
K2 Integrity
Your LinkedIn Connections
with the authors
To print this article, all you need is to be registered or login on Mondaq.com.

On July 16, 2021, the U.S. Government issued a new advisory highlighting the growing risks associated with doing business in Hong Kong ("the Advisory"). The Advisory, issued by the U.S. Departments of State, Treasury, Homeland Security, and Commerce warns U.S. persons of potential reputational, regulatory, financial, and legal exposure following the changes to Hong Kong's laws and regulations imposed by the Government of the People's Republic of China (PRC) in June 2020, and the continuous erosion of Hong Kong's autonomy. The Advisory builds upon the other advisories previously issued by the U.S. Government that highlight the range of growing financial crimes and compliance risks associated with doing business in China.1

The New Advisory and Related Guidance

The Advisory warns that as the PRC increases its control over Hong Kong, businesses continuing to do business there face several types of risks. These risks include:

*Click here to view this table on a mobile device. 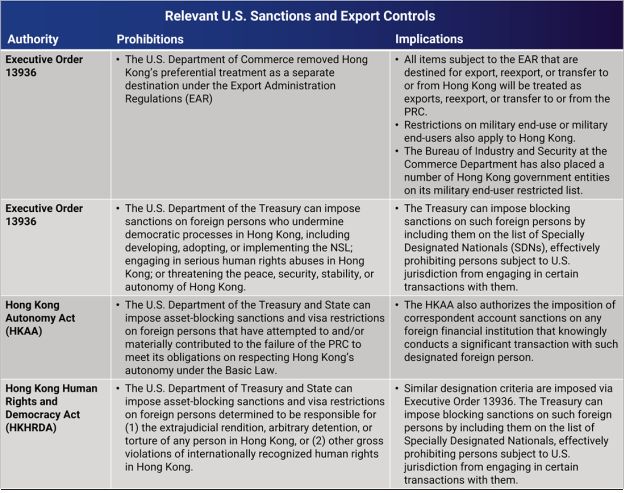 Implications for the Private Sector

4. Foreign Ministry Spokesperson's Remarks on US Issuance of the so-called "Hong Kong Business Advisory" and Sanctions on Officials of the Liaison Office of the Central People's Government in Hong Kong, Embassy of the People's Republic of China in the United States of America, (July 17, 2021), available at http://www.china-embassy.org/eng/fyrth/t1892928.htm