On November 5, the SEC released its widely anticipated proposed changes to some of the procedural requirements for shareholder proposals to be included in management's proxy statement under Exchange Act Rule 14a-8.1 The proposed changes, which a divided SEC released concurrently with proposed new rules about proxy advisory firms2 , come nearly a year after the SEC hosted a roundtable to solicit stakeholder views on the proxy process3 and a related SEC invitation for public comment on the proxy process. The SEC first adopted Rule 14a-8 (formerly, Rule X-14A-7) in 1942 to require management to include in its annual proxy statement any shareholder proposal that was "a proper subject for action by the security holders." Since 1942, it and related rules governing shareholder proposals have been amended several times to impose and update substantive and procedural limitations on the ability of a shareholder to include a proposal for a vote in management's proxy statement. These rules have generated strong and opposing views over the decades because many companies view them as overly permissive, giving very small shareholders with agendas unrelated to shareholder value access to "valuable real estate" in management's proxy statement, while shareholders, including some large institutional shareholders, point to very important governance reforms that have their origins in shareholder proposals. The SEC since 2001 has also provided interpretive guidance about Rule 14a-8 through Staff Legal Bulletins (SLBs), which in recent years have mainly addressed the substantive grounds on which a company can exclude a proposal.4 In this latest release, the SEC addresses procedural requirements that it has not publicly reviewed in more than 20 years. The release proposes five changes to Rule 14a-8 that we discuss in further detail below.

To be eligible to submit a proposal, Rule 14a-8(b) currently requires a shareholder to have held a minimum amount of a company's stock ($2,000 worth or 1% of the outstanding) for at least one year. The proposed amendments:

One criticism of the current $2,000 economic stake requirement is that it is not indexed to inflation, resulting in what some perceive to be an insignificant investment commitment for a shareholder relative to what it was in 1998, when this element of the rule was last updated. In the release, the SEC suggests that the proposed changes are meant to require a shareholder to demonstrate a significant and long-term interest in a company to be able to submit (and resubmit) a proposal.

Practically, if adopted, these changes alone are not likely to have an impact on most companies that have received proposals on a multi-year basis from the most prolific shareholder proponents, who likely satisfy the revised three-year test. They would, however, protect newly public companies for at least three years postIPO from having to grapple with proposals from shareholders that typically have maintained a $2,000 stake solely for the purpose of making shareholder proposals.

Companies have sometimes expressed frustration with shareholder proposals backed by multiple proponents due to a lack of transparency about the identity and role of each proponent – including which ones have authority to engage or to withdraw a proposal. The release encourages proponents to be clear about cofilers and identify a lead filer in initial communications with a company, but stops short of imposing formal requirements.

Proposals Submitted Through a Representative

The SEC acknowledges in the release that stakeholders have raised many questions about the representative process, and the lack of clear requirements makes this area ripe for abuse by representatives that wish to advance their own proposals but do not individually satisfy the eligibility requirements. The revised rule, if adopted, would formalize existing guidance in SLB 14I, which has some similar requirements as the proposed rule (although the proposed rule requires some additional information). The proposed procedural requirements were introduced to eliminate some of the uncertainty and burden companies bear in evaluating shareholder-representative arrangements.

While these changes may seem minor and easy to comply with, they would be formal requirements and presumably the failure to comply with any required line item would render a proposal ineligible if not amended within the required time.

The proposal would amend Rule 14a-8(c) to apply the existing one-proposal limit to each person rather than each shareholder. Unlike the current rule, it would therefore prevent any individual from acting as a representative for more than one shareholder proposal or as a proponent of one proposal and representative for a different proposal in a proxy.

The release does clarify that the amendment is not intended to prevent shareholders from seeking the advice or assistance of advisors in preparing a shareholder proposal and an advisor may continue to provide assistance to multiple shareholders.

The SEC continues to believe that a one-proposal limitation is appropriate and the change is intended to prevent evasion of it.

This proposed rule – together with those above, and particularly the representative clarification – reflects the SEC's focus on the role of representatives. At the end of the proposed rule, the SEC seeks comment on whether it should eliminate altogether the ability of shareholders to appoint a representative.

The proposed rule would require a shareholder proponent to provide a written statement that he or she is available to meet with the company in person or via teleconference and include specific availability windows during the period between 10 and 30 days after submission. The statement would also include the shareholder's contact information. The representative, if any, is also required to submit the same information.

Engagement between proponents and companies has increased in recent years, and during the 2019 proxy season nearly half of the initially submitted environmental and social proposals were withdrawn by proponents after successful engagement. The SEC notes in the release that it believes engagement produces beneficial change for all stakeholders and reduces expense for companies and administrative burdens on the SEC staff. It has also expressed concern that the no-action process may inhibit productive engagement, for example by discouraging a shareholder that believes it has a strong basis to include its proposal in the proxy statement from seeking to attain its objective through engagement rather than the public forum of a shareholder resolution.

While required engagement might be beneficial, the proposed rule does not include an enforcement mechanism.

A company is currently permitted to exclude a shareholder proposal that deals with substantially the same subject matter as a proposal voted on in the last five years if the proposal did not receive a minimum level of support. The proposed amendments would raise the minimum support thresholds as follows: 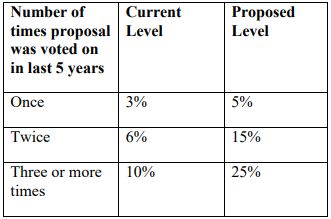 In addition, if a proposal was voted on three or more times in the last five years and received more than 25% support, but that support declined by more than 10% between votes, the company could also exclude it.

The current resubmission thresholds were last reviewed by the SEC in 1997 but have not been revised since 1954. As part of its review of the proxy process, the SEC found that only about 6.5% of resubmitted proposals over a recent seven year period eventually received majority support. It also found that resubmitted proposals that met the proposed thresholds were more likely to have eventually garnered majority support.

The proposed changes to the resubmission thresholds reflect some SEC sympathy for management complaints regarding diversion of time and resources to "zombie" proposals. But while the proposed rule does not include exceptions, the request for comment does suggest a willingness to consider alternatives and a need to better understand the cost to companies associated with proposal resubmissions.

Putting the Proposed Changes in Context

One of the most interesting aspects of the proposed changes comes from that place in the back of the release that readers often gloss over – the economic analysis. The SEC in this particular release relies heavily on data produced by retroactive application of the proposed changes to the results of shareholder votes over a recent historical period.

Action by the Commission on the procedural elements of Rule 14a-8 was inevitable at some point, in particular because the submission threshold was never pegged to inflation. The SEC has sought to find a balanced solution – addressing the concerns of public companies with respect to the disproportionate dedication of resources to the proxy process, and the concerns of shareholders wanting to effect change. The result appears to be a data-driven attempt by the SEC to find a middle ground.

This practical approach may reflect an SEC trend toward reliance on quantifiable data, particularly with respect to sensitive Rule 14a-8 issues. In recent years we have seen no-action relief granted with respect to the aggregation limit for proxy access only to companies submitting quantitative data to back their arguments. In addition, in SLB 14J the SEC staff clarified that quantitative data would be a persuasive factor in evaluating board analysis provided as evidence for a company's no-action request on the basis of economic relevance and ordinary business. As companies navigate interactions with SEC staff regarding shareholder proposals, it is worth evaluating whether quantitative analytical data supporting their positions is available, even in areas that the staff has not yet indicated are likely to be significantly influenced by data-driven support.

2. See our alert memo Proxy Advisory Firms — The SEC Drops the Other Shoe, available at https://www.clearygottlieb.com/news-and-insights/publication-listing/proxy-advisory-firms-the-sec-drops-the-othershoe?search=.