In 2015, the year after the Department of Justice ("DOJ") resolved several long-term and large-dollar Foreign Corrupt Practices Act ("FCPA") investigations, the most significant FCPA story was the sharp decrease in both the number and size of the DOJ's corporate FCPA resolutions. The DOJ settled FCPA cases with only two companies and collected $24.2 million in 2015, figures that equal only a fraction of the ten corporate enforcement actions and over $1.25 billion collected in 2014. Not since 2004 has the DOJ's corporate FCPA prosecution effort resulted in so few cases. The DOJ attributed this drop to fewer self-disclosures and to its focus on pursuing more complicated "higher-impact" bribery cases. Against this slowdown in FCPA enforcement, the DOJ invested in the future of its enforcement regime by tripling the number of Federal Bureau of Investigation ("FBI") agents devoted to investigating foreign bribery cases, hiring a dedicated compliance expert, and announcing plans to double the number of prosecutors devoted to FCPA prosecutions.

By comparison, the Securities and Exchange Commission ("SEC") had a more typical year with respect to FCPA enforcement statistics. It resolved ten relatively low-dollar corporate FCPA enforcement actions—with a settlement range of $75,000 to $25 million—and resolved two enforcement actions against individuals. The SEC's corporate enforcement activity demonstrated its more expansive view of the type of conduct that constitutes a civil FCPA violation. For example, one of the SEC's resolutions involved allegations that an internship program for family members of foreign government officials qualified as "anything of value" under the FCPA. Other noteworthy SEC settlements involved allegedly giving payments and benefits to Chinese health care providers who were, according to the SEC, "foreign officials" under the FCPA and allegedly providing extravagant gifts, travel, and entertainment to foreign government officials.

In the latter part of 2015, the DOJ received much publicity when it reaffirmed its pledge to prosecute individuals in a September 9 memorandum written by DOJ Deputy Attorney General Sally Yates (the "Yates Memo"). Consistent with these public statements, in 2015, the DOJ announced guilty pleas by individuals in connection with each of its two corporate FCPA enforcement actions and obtained significant prison sentences for several former executives who had pled guilty. The DOJ, however, continued its streak of FCPA trial struggles when its high-profile trial against Joseph Sigelman, former CEO of PetroTiger, abruptly ended with a plea deal for probation after the DOJ's star witness admitted to lying on the stand.

In 2015, the DOJ and SEC brought a total of 21 enforcement actions against companies and individuals, which was five fewer than the 26 announced in 2014.1 The size and scope of the monetary resolutions in 2015 declined significantly from 2014. The amount of fines and disgorgements for all FCPA enforcement actions in 2015 was $140 million, which is less than one-tenth of the amount the DOJ and SEC collected in 2014, a near record year at $1.57 billion, and less than one-fifth of the $720 million collected in 2013.2 The drop in 2015 is largely attributed to the absence of any settlements above $25 million—2014's near-record year was driven by the resolution of four settlements above $100 million.3 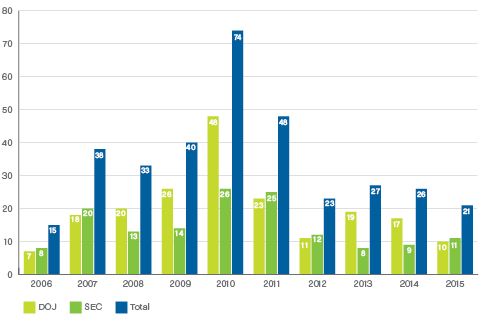 DOJ Enforcement Activity Significantly Declined in 2015. The DOJ brought 10 FCPA enforcement actions against companies and individuals in 2015, a 41 percent drop from the 17 enforcement actions in 2014.4 Additionally, for the first time since 2004, the DOJ resolved only two corporate FCPA cases, which is an 80 percent decline from the ten corporate resolutions in 2014.5 The DOJ collected $24.2 million in FCPA fines in 2015, a small fraction of the over $1.25 billion it collected in 2014.6

In 2015, the DOJ settled two long-standing corporate investigations involving conduct that was in both instances at least five years old. First, the DOJ entered into an NPA with IAP Worldwide Services, Inc. to resolve an investigation into an alleged conspiracy between 2004 and 2008 to bribe Kuwaiti officials to obtain a technology services contract valued at $4 million.7 IAP Worldwide agreed to pay a $7.1 million penalty and was not required to retain a monitor.8 The DOJ cited IAP's cooperation as a factor that led to the NPA.9 Second, the DOJ entered into a DPA with Louis Berger International ("LBI") in which the company admitted that between 1998 and 2010 several of its officials in Asia bribed officials in Kuwait, India, and Indonesia to win contracts.10 LBI paid a $17.1 million penalty and agreed to a three-year monitorship to resolve the DOJ's investigation.11 In agreeing to the DPA, the DOJ considered the company's self-disclosure, cooperation, remediation, and improvements to its compliance program and internal controls.12

In October, the DOJ made public statements to explain the decline in FCPA cases. A DOJ spokesman said that the agency's lower corporate enforcement activity was attributable to the slowdown in self-reported "smaller cases" and the DOJ's shift in focus to high-value enforcement actions.13 Specifically, the spokesman stated that the DOJ "several years ago handled more cases based on self-reporting by companies, and as a result of that we saw more resolutions, but smaller cases."14 As the DOJ spokesman explained, however, the DOJ is now adjusting its focus to "bigger, higher impact cases, including those against culpable individuals, both in the U.S. and abroad, [that] take longer to investigate and absorb significant resources," which has led to the slowdown in enforcement activity in 2015.15 The DOJ stated that these cases "take years to investigate," which can impact year-over-year statistics.16 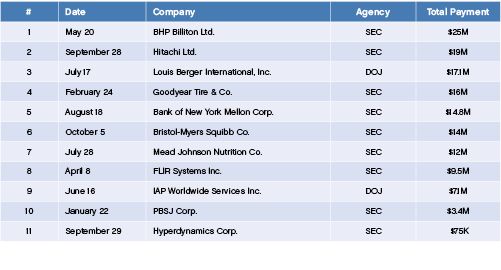 DOJ and SEC Announced Nine Individual Enforcement Actions. In 2015, the DOJ and SEC also followed up on their pledges to pursue individuals in FCPA investigations. The DOJ announced charges against seven individuals, six of whom have entered guilty pleas and the SEC charged two individuals with civil FCPA violations.19 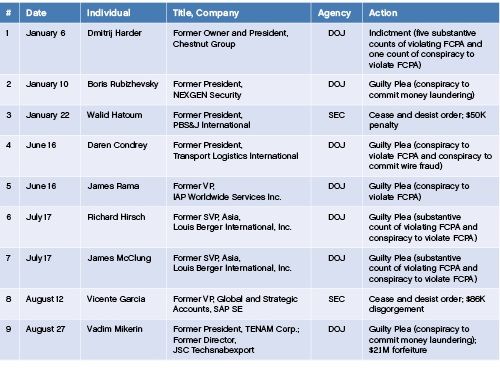 While the DOJ's additional resources will likely lead to an uptick in FCPA enforcement activity, how quickly this will occur is unclear; results may not be apparent until much later this year or 2017.

Highlights from five of the SEC's enforcement actions—with settlements ranging from $9.5 million to $25 million—are discussed below. These enforcement actions demonstrate the broad applicability of the FCPA's internal controls and books-and-records provisions.

Expansive Interpretation of the FCPA's Restriction on Providing "Anything of Value" to Foreign Officials. Bank of New York Mellon Corp. ("BNY Mellon") settled allegations that it provided internships to unqualified family members of foreign government officials. The SEC applied the FCPA's internal controls provisions to BNY Mellon's human resources hiring practices. It viewed internships for the relatives of two government officials, in one case unpaid, as conferring something of value to a government official to obtain or retain business.27 Without admitting or denying the charges, BNY Mellon agreed to pay $14.8 million consisting of $8.3 million in disgorgement, $1.5 million in prejudgment interest, and a $5 million penalty.28 BNY Mellon's settlement was the first of its kind in numerous respects; it was the first enforcement action involving internships and the first settlement in connection with the SEC's sweep of sovereign wealth funds.

The SEC took an expansive view of the FCPA's prohibition against providing "anything of value" to a foreign official to obtain or retain business, alleging that giving internships to unqualified family members of foreign government officials constituted something of value to the officials.29 In announcing the settlement, the Chief of the SEC's Enforcement Division warned that "cash payments, gifts, internships, or anything else used in corrupt attempts to win business can expose companies to an SEC enforcement action."30 In light of BNY Mellon, companies must be aware that even items lacking any direct monetary value—such as an internship awarded to a foreign government official's relative—may still be viewed as a thing "of value" by the SEC or DOJ. As a result, if conferred on a foreign official (either directly or indirectly through a family member), such items may still trigger liability under the FCPA. As part of its cooperation and remedial efforts, BNY Mellon enhanced its anti-corruption compliance program to specifically address the hiring of government officials' relatives.31

Payments and Benefits to Chinese Health Care Providers Under Scrutiny. The SEC's settlements with Mead Johnson Nutrition ("Mead Johnson") and Bristol-Meyers Squibb ("BMS") highlight the significant level of risk involved in doing business in the healthcare industry in China, where many healthcare providers are employees of state-owned hospitals and could qualify as "foreign officials" under the FCPA.

First, in July 2015, Mead Johnson resolved an SEC investigation into alleged payments through third parties to health care professionals in government-owned hospitals in China.32 The SEC alleged that Mead Johnson's Chinese subsidiary made improper payments to third-party distributors, who then allegedly paid cash and other incentives to health care professionals in Chinese state-owned hospitals to induce them to recommend Mead Johnson's infant formula to new and expectant mothers.33 The physicians in the state-owned hospital constituted "foreign officials", according to the SEC, within the meaning of the FCPA.34 The SEC ultimately alleged that the company's failure to accurately record the transactions and its "lax internal controls" enabled its subsidiary to misuse funds in violation of the FCPA.35

Second, in October 2015, BMS agreed to settle SEC allegations that it provided cash and other benefits to local health care providers at Chinese state-owned and state-controlled hospitals in exchange for prescription drug sales.40 The SEC alleged that between 2009 and 2014, sales representatives of BMS's majority-owned joint venture in China, BMS China, provided cash, gifts, meals, travel, entertainment, and conference sponsorships to health care providers.41 The SEC also alleged that BMS China inaccurately recorded this spending as legitimate business expenses, failed to respond to red flags indicating bribes, did not investigate claims of terminated employees, and was too slow in its remedial response.42

Without admitting or denying the allegations, BMS resolved the SEC allegations that it violated the FCPA's internal controls and recordkeeping provisions by agreeing to a two-year self-monitorship and agreeing to pay a $14 million fine.43 Like Mead Johnson, the BMS settlement highlights the risk of doing business in the healthcare sector in China due to extensive state involvement in the industry and the SEC's expansive view of who qualifies as a foreign government official.44

Focus on Providing "Gifts, Travel, and Entertainment" to Government Officials. The SEC's enforcement actions against BMS and BHP Billiton highlighted the SEC's enforcement of allegedly illicit gifts, travel, and entertainment to foreign government officials. In May 2015, the SEC alleged that BHP Billiton lacked adequate internal controls over its Olympic Games hospitality program.45 Even with no allegation of bribery, BHP Billiton's alleged failure to institute policies and procedures designed to adequately protect against corruption risk led to a $25 million settlement, making it the largest FCPA settlement of 2015.46 The SEC alleged that BHP Billiton invited 176 foreign officials, mostly from Africa and Asia, to attend the 2008 Beijing Olympic Games and ultimately sponsored the attendance of 60 foreign officials and 24 of their spouses.47 The company paid between $720,000 and $960,000 in total for the hospitality packages.48 BHP Billiton did not admit or deny the SEC's allegations.

The SEC's order alleged that BHP Billiton failed to devise and maintain internal controls and failed to accurately maintain books and records related to the company's Olympic Games hospitality program. The SEC did not allege that BHP Billiton gained any specific business from the provision of the hospitality packages and did not allege the existence of a quid pro quo. The SEC's use of the FCPA's books and records and internal controls provisions—without any allegation that bribery occurred—to impose the agency's largest penalty of 2015 highlights the SEC's broad reading of the FCPA's recordkeeping and internal controls provisions.

To read this Review in full, please click here.