by Curtis A. Doty , J. Paul Forrester , Donald Waack and Matthew Bisanz
Mayer Brown
Your LinkedIn Connections
with the authors

A perennial challenge in the prudential regulation of banks' derivatives activities has been the development of uniform, administrable, yet adequately risk-sensitive standardized methods for calculating derivatives exposures for use in prudential ratios. The so-called "current exposure methodology" (CEM), which traces its origins to the 1988 Basel I Accord and applies for certain purposes under the current US implementation of the Basel III regulatory capital standards, has been criticized for not differentiating between margined and unmargined derivatives transactions, not recognizing the risk reduction inherent in balanced portfolios, and using conversion factors that have not been recalibrated to reflect more recently observed volatilities. In response to these shortcomings, the Basel Committee on Banking Supervision (BCBS) developed the "standardized approach to counterparty credit risk" (SA-CCR), which it published as a final standard in 2014.1

On October 30, 2018, the Federal Reserve Board (FRB), the Office of the Comptroller of the Currency (OCC) and the Federal Deposit Insurance Corporation (FDIC) issued a notice of proposed rulemaking (NPR) that, if finalized, would implement SA-CCR under each agency's respective regulatory capital rules.2 Under the NPR, the so-called "advanced approaches" banking organizations3—generally US entities that have $250 billion or more in total consolidated assets or $10 billion or more in on-balance sheet foreign exposure and certain subsidiaries of these organizations—would be required to use SA-CCR to calculate their total risk-weighted assets under the standardized approach and the clearinghouse default fund contribution included in total riskweighted assets, and to use a modified SA-CCR to determine the exposure amount of derivative contracts in the total leverage exposure component of the supplementary leverage ratio. Nonadvanced approaches banking organizations would be allowed to use either CEM or SA-CCR to determine their exposure amount for derivative contracts but would need to be consistent in their usage with respect to non-cleared and cleared transactions and default fund contributions. Attached as Appendix A is a chart summarizing the applicability of SA-CCR under the NPR.

We comment briefly below on selected aspects of the NPR and refer readers to the NPR, BCBS publications and various official sector commentary for more detailed discussion.5

According to the US agencies, the BCBS standard does not allow unitary treatment of a netting set that is subject to more than one variation margin agreement. Rather, as described by the US agencies, the BCBS standard would require a banking organization to calculate the exposure amount at the level of each variation margin agreement, regardless of whether the multiple margin agreements are under the same qualified master netting agreement.7 In contrast, the NPR's approach is intended to allow all derivative contracts within a netting set to offset one another in the replacement cost component calculation, regardless of whether the netting set is subject to multiple variation margin agreements or is a hybrid netting set. However, the NPR would require part of the potential future exposure (PFE) calculation to be performed at the level of subnetting sets (i.e., the sub-netting set of unmargined derivative contracts and a sub-netting set for each value of the margin period of risk (MPOR)8) because contracts in different subsets "cannot offset [each other] ... because of different applicable risk horizons."9

The NPR would require advanced approaches banking organizations to use a modified version of SA-CCR to determine their total leverage exposure for purposes of the supplementary leverage ratio. The modified version of SA-CCR generally would maintain certain features of the current treatment of derivatives in the supplementary leverage ratio. Similarly to the current treatment, banking organizations would be able to recognize cash variation margin in the on-balance component of total leverage exposure only if certain conditions are met, and the off-balance sheet component must use a PFE multiplier that disregards collateral. However, unlike the current CEM-based approach, the maturity factors used in determining PFE would take into account the shorter default risk horizons resulting from a variation margin agreement. The US agencies take note briefly of impediments to the availability of client clearing services that have been raised in connection with the supplementary leverage ratio and request comments (including cost data) on how alternative approaches to the treatment of collateral provided by clearing clients would affect the cost of clearing services.

The NPR includes various technical amendments that address receivables due from a qualifying central counterparty (QCCP), recognition of collateral posted to a central counterparty (CCP) as financial collateral, the risk weight under the standardized approach of the CCP-facing exposure in a cleared transaction, bankruptcy remoteness of collateral held by a third-party custodian, collateral haircuts applied in determining the client-facing exposure in respect of cleared transactions, and the use of SA-CCR in the OCC's lending limits rule as an option for determining exposure amounts for derivative contracts.

Appendix A: Applicability of SA-CCR under the NPR10 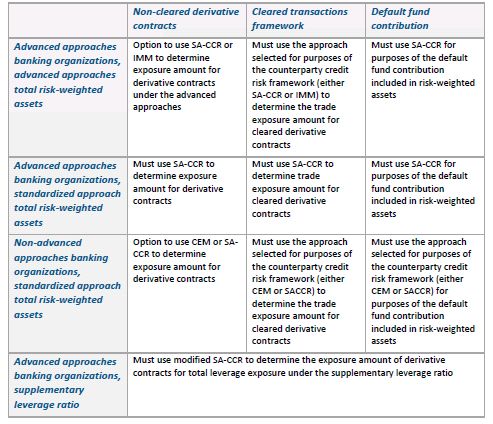 2 The NPR is available at https://www.federalreserve.gov/newsevents/pressreleases/files/bcreg20181030a1.pdf.

3 The US agencies indicate that they are considering changes to the definition of an "advanced approaches banking organization" and may issue a separate proposal in the near future.

4 The US agencies also note that the implementation of SACCR would have consequences under the FRB's recently implemented single-counterparty credit limits rule and the proposed net stable funding ratio rule, both of which reference aspects of the existing US regulatory capital rules that would change if the NPR is finalized.

7 This statement appears to be based on Paragraph 185 of the Basel Committee standard: "If multiple margin agreements apply to a single netting set, the netting set must be divided into sub-netting sets that align with their respective margin agreement. This treatment applies to both RC [replacement cost] and PFE [potential future exposure] components.]"

9 The NPR does not further explain this rationale. Although the computation of "hedging set amounts" limits offset between transactions in different correlation buckets of the relevant risk factors (e.g., different tenor buckets for interest rate derivatives), it is not obvious that the same correlation assumptions would be inappropriate for contracts with differing values of the MPOR (or expected exposure horizon for unmargined contracts) that meet the criteria of a given correlation bucket.