Geopolitical uncertainty and escalating trade tensions have combined to add additional layers of complexity and risk to the dealmaking process in recent years. Through this tumultuous period, however, cross-border M&A deal flow has remained surprisingly resilient. Dealmakers with a long-term outlook and a willingness to look beyond the headlines have found ways to navigate these issues.

In this report, our M&A partners, trade lawyers and senior dealmakers at global companies share their thoughts on how Brexit, trade disputes and the upcoming US election are reshaping the deal landscape. We also offer our M&A predictions for 2020/2021 and explain how thoughtful preparation means deals will keep getting done.

Despite Brexit, the UK is still the no.1 destination for US-EU inbound M&A, representing almost 40 percent of EU deals each year.

China-EU inbound M&A has fallen by 50 percent since 2016, but is expected to recover.

Tech, health care and financial services deals make up over 50 percent of the global M&A market by value. 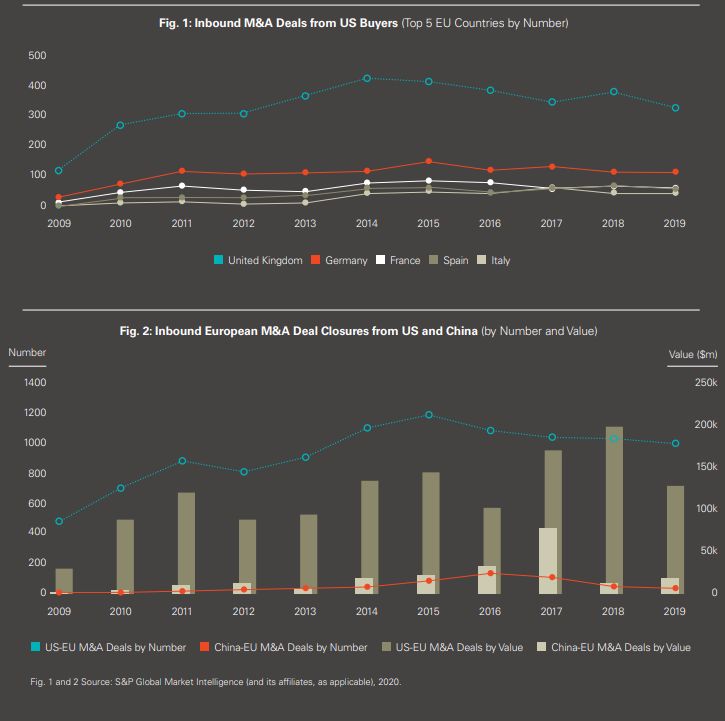 A decisive election outcome has created new political stability with a business-friendly government. M&A activity is likely to increase as a result.

A wave of pent-up deal activity is expected to come to market in 2020 following the decisive result of the 2019 general election.

The emergence of a strong, business-friendly government has provided a clearer economic and political backdrop for investment decisions after three years of political instability.

"There is an M&A backlog, as some deals went on hold before the election. This bodes well for activity in 2020 as buyers and sellers return to the market."
—Gavin Weir
Akin Gump M&A partner, London

With an 80-seat majority, Prime Minister Boris Johnson has the political clout to negotiate a new free trade agreement with the EU in one shape or another, or agree an extension to the transition period if necessary. Dealmakers are relieved that the immediate prospect of a no-deal Brexit or prolonged delay has receded. Perhaps surprisingly, UK M&A deal activity has remained relatively stable since 2016, although there was a noticeable dip towards the end of 2019.

Deals that were abandoned or delayed are now far more likely to go ahead. Private equity firms are more confident too, as a clearer post-Brexit roadmap puts new deals back on the radar for sponsors.

The election result also removes the uncertainty of a far less business-friendly regime under a Jeremy Corbyn government, including an extensive nationalisation programme.

Deals like the potential £2 billion sale of Electricity North West broke down as the business was at risk of nationalisation if Labour won. Deal activity in the utility and infrastructure sectors and others, such as technology, media and telecommunications, and health care, should rebound with state ownership off the table.

"The sterling/dollar exchange rate has held below the long-term average, making the UK a very attractive market for M&A."
—Senior principal of a global
PE house

Political stability will also sustain inbound investment into the UK, particularly from the US. US-backed M&A in the UK remained strong after the 2016 referendum, as US dealmakers arbitraged softer sterling to buy UK assets at lower dollar valuations.

Historically the UK has accounted for 30-40 percent of all US inbound M&A into Europe each year, with Germany and France distant runners-up. Perhaps surprisingly, the UK's clear lead for US inbound M&A was not dented by the recent political uncertainty.

"Despite all the noise about Brexit, the thing that kept most deal makers up at night was the prospect of a Corbyn government."
—European head of global PE house

Looking ahead, evidence suggests that the UK will continue to outpace Europe given the UK's dominance in European financial markets. Even with a protracted EU-UK trade negotiation, investors will take a longer term view given the UK's renewed political stability.

With the emergence of the "strong and stable" government of which Theresa May once dreamed, it seems that the UK's M&A market is open for business and poised for more deals in 2020.

How Geopolitics is Reshaping Global M&A

Global trade tensions and political turbulence contributed to a decline in deal activity in 2019, but even though M&A now involves additional layers of geopolitical and regulatory complexity, deals are getting done.

International trade conflicts and political uncertainty have impacted global M&A, which saw a double-digit dip in 2019.

"The sell-side has to do a lot more homework when preparing an asset including anticipating potential regulatory hurdles and ideally pre-empting any buy-side concerns so as to attract the widest pool of potential buyers. Deals may take longer to get done, but they will get done."
—Davina Garrod
Akin Gump competition partner, London

Navigating the increasing complexities of trade and merger control regimes has become increasingly important to M&A deal processes, especially as a result of complex sanctions regimes imposed on Russia, Iran and Iraq.

"Dealmakers are used to the new reality and will speak to trade lawyers much earlier. There is recognition that the process is more complex, but if you address issues early, deals will close."
—Sebastian Rice
Akin Gump M&A partner, London

However, dealmakers who have taken time to find workable solutions have continued to close large cross-border transactions regardless. US private equity bids for UK defence contractor Cobham and satellite company Inmarsat, for example, were cleared by regulators following initial ministerial intervention.

Indeed, despite trade stand-offs and tougher rules governing foreignbacked M&A, cross-border deal activity has been relatively resilient in the last few years. Transatlantic deal activity is more than double 2009 levels; and while Chinese investment into the US and Europe has slid from 2016 highs, this is arguably as much to do with Chinese domestic political and economic conditions as it is with wider geopolitical tensions. China will always be on the lookout for investments that fit with its very long-term strategic interests, including the Belt and Road initiative.

"Asia is a key strategic market for our business. We will continue to look at deals that support this strategy. You have to factor in more complex dynamics, but these are not deal breakers."
—FTSE-100 executive

An executive at a listed industrial distributor adds: "Our business relies on complex global supply chains. We had to look at the impact of tariffs on margins and security of supply. But there are long-term objectives that direct our M&A strategy, like digitalisation. We will work around the complexities when necessary."

Signs of trade conflicts de-escalating also offer comfort. The new United States–Mexico–Canada Agreement (USMCA) trade deal is expected to come into play this year, and opportunities to reset relations with China and broker EU-UK and US-UK trade deals are possibilities. And at some stage China will emerge from its recent slump and refocus on outbound M&A.

"The turn of the year brought substantial progress, with a US-China trade deal and the USMCA. 2020 will remain exciting, with a US pivot to the EU, UK and WTO."
—Clete Willems
Akin Gump international trade partner,
Washington, D.C.

Protectionist leanings of governments across Europe and the US still present headwinds for dealmakers in the short to medium term.

However, with good preparation and advice, these headwinds are navigable.

President Trump's trade strategy hasn't always sat well with dealmakers, but M&A activity has increased during his time in office. With Democrat presidential candidates offering an alternative approach, the November poll will influence M&A through 2020.

Despite the market uncertainty caused by his administration's aggressive global trade strategy, US and transatlantic M&A activity has thrived under Donald Trump's presidency.

US domestic deal activity is up and transatlantic deal flow has sustained high levels since Trump's 2016 election. 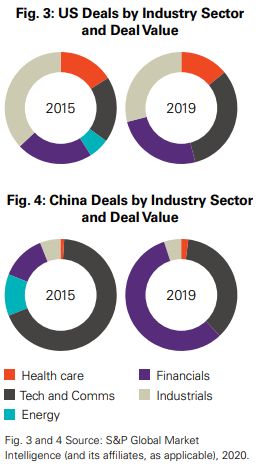 A Trump victory in 2020 is likely to extend this streak of strong M&A activity. However, stark differences between his policy agenda and those of the Democrat candidates are set to emerge, which will add a layer of uncertainty to deal activity.

For example, if Joe Biden wins the nomination he will campaign on a more moderate platform, but should Elizabeth Warren or Bernie Sanders progress, the risk of deal disruption will heighten materially.

An Elizabeth Warren victory would be of particular concern to US private equity firms. In July 2019 Warren gave a speech accusing buyout dealmakers of "bleeding" companies dry. Warren has also outlined proposals to prioritise worker severance pay over investment capital in the event of bankruptcy; tax any fees that funds take from portfolio companies at 100 percent; and make managers personally liable for the debts of companies they back. This could have a chilling effect on buyouts.

"Private equity firms are sitting on record amounts of dry powder and the US M&A market is competitive and fully priced. Over the next year the boost to US M&A from the Trump administration's tax cuts will level off too. These factors will see American dealmakers looking further afield for value."
—Managing director of global
investment bank

A Warren or Sanders victory could also have consequences for wider transatlantic M&A, as their positions on international trade and globalisation are even more inward than that of Trump. This would make a post-Brexit free trade agreement with the UK more difficult to negotiate, with knock-on impacts for transatlantic deals.

Given the strength of the US economy and the record amount of dry powder available to buyout firms, dealmakers will not be able to sit on their hands awaiting the poll result.

Investors will be working scenarios for various outcomes into investment cases. Private equity investors could move to accelerate realisations ahead of the election to de-risk portfolios in anticipation of a potential Warren or Sanders presidency. Large corporates, meanwhile, will be more cautious before moving in on large, long-term strategic deals until after the election, but not at the risk of losing assets to competitors.

"The US M&A market has been very strong for the last several years. In spite of global trade and political volatility, the strong US economy and bullish equity markets have been particularly helpful to strategic buyers. Private equity has been very active, doing more, albeit somewhat smaller deals.
—Jeff Kochian
Akin Gump M&A partner, New York

"The election cycle does add a layer of uncertainty, but we will not miss out on the chance to acquire a key strategic target because of that," an executive at a London-listed company with a large US revenue base says. "Policies typically veer to the extremes in the primaries and then tack back to centre".

Sectors such as health care, energy and technology may be more exposed to a pre-poll deal dip, as these are the areas where a Democrat victory could see the biggest changes to pricing, taxation and regulation. However, overall favourable deal fundamentals should override political volatility.

"There's uncertainty building ahead of the US election and dealmakers will be hoping for a result that provides stability on taxation, foreign policy and trade strategy. M&A investors will want to know where we are going to be in the months and years after the election."
—Senior M&A advisor at global
investment bank