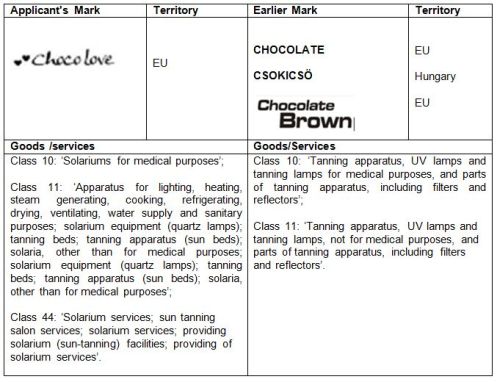 However, the Board of Appeal annulled this decision. In doing so, it held that the level of attention of the relevant public for the Class 10 and 11 goods was, on average, high, as tanning appliances were specialist goods which were relatively expensive and usually only bought by professionals or highly attentive end consumers. As regards the Class 44 services, these were mainly aimed at non-professionals who focused on the quality, safety, comfort and price of the service – accordingly, the level of attention was normal.

It held that, while the goods in Classes 10 and 11 were identical, there was only a remote degree of similarity between Class 11 goods covered by the earlier word mark for CHOCOLATE and the services in Class 44 covered by the Applicant's mark.

In comparing the earlier CHOCOLATE word mark and the mark applied for, it found that there was a low degree of visual and phonetic similarity and that they were conceptually similar. Overall, the signs were similar to a low degree.

The Board held that there was no likelihood of confusion. The similarities between the marks at issue were not sufficient to offset the differences between them. There was no dominant element of the mark applied for. The Opponent had also not proved that the earlier EU word mark had a reputation, so the Board dismissed its claim.

Relevant public and level of attention

The Opponent claimed that the Board was wrong to say that the relevant public, with regards to the Class 11 and 44 goods / services, were professionals whose level of attention was high. It argued that the goods and services were aimed at both professionals and end consumers, and that, given the inexpensive nature of the lamps, the level of attention should have been deemed average rather than high.

However, the General Court rejected this argument and agreed with the Board of Appeal. The Class 11 goods were intended mainly for professionals. They commented that these are specialist goods which are relatively expensive. The relevant public only buys these goods periodically or exceptionally and when it does so, takes into account specific features and price.

The Opponent argued that the Board was wrong in saying that the contested services in Class 44 were only remotely similar to the goods covered by the earlier word mark for CHOCOLATE. It said that the Board did not take into consideration the fact that the goods were intended to be used by end consumers as well as professionals. It also argued that the distribution channels overlapped and that the goods and services were in competition with each other and complementary in so far as they all had the same purpose.

Comparison of the signs

Despite the Opponent's arguments that the dominant element of the mark applied for was 'choco', the General Court found that the graphic element in the form of hearts and the word element 'love' were not negligible elements. It held that the Board was right to say that there was a low degree of visual similarity between the marks – the similarities between the signs (i.e. the coincidence in the sequence of letters in the signs) were not sufficient to offset the differences (i.e. the graphic elements, addition of the word 'love' and the fact that 'choco' was shorter than the word 'chocolate'). Similarly, there was only a low degree of phonetic similarity because of the difference in pronunciation of the words 'choco' and 'chocolate' and the addition of the word 'love'. While the General Court noted the conceptual similarity because the word 'choco' would be taken to refer to 'chocolate', the sign applied for also contained the word 'love', which changed the meaning of the sign. Therefore, the mark applied for would convey the idea that the goods and services in question would give the user 'an attractive skin colour which will make it possible to gain someone's affection.'

Distinctive character of the earlier mark

The General Court held that the Board had been right to discard this evidence, as it had not been translated into the language of the proceedings. Even though some of the documents contained figures and images, it was not possible to understand them to verify the applicant's claims.

The Opponent also submitted that its earlier marks constitute a family of trade marks, which have the concept of 'chocolate' in common. This was not accepted by the General Court, who said that, for the 'family of marks' argument to succeed, the earlier marks forming part of the series must be present on the market. Failing proof of the use of a sufficient number of the trade marks in the family reduces the significance of the argument. In the present case, the applicant had not provided any evidence showing that this criteria was fulfilled.

Bearing in mind the low degree of similarity between the marks, the remote similarity of the Class 44 services and goods covered by the earlier mark and the high level of attention of the relevant public, there was not a likelihood of confusion.

The appeal was therefore dismissed and the opposition rejected.