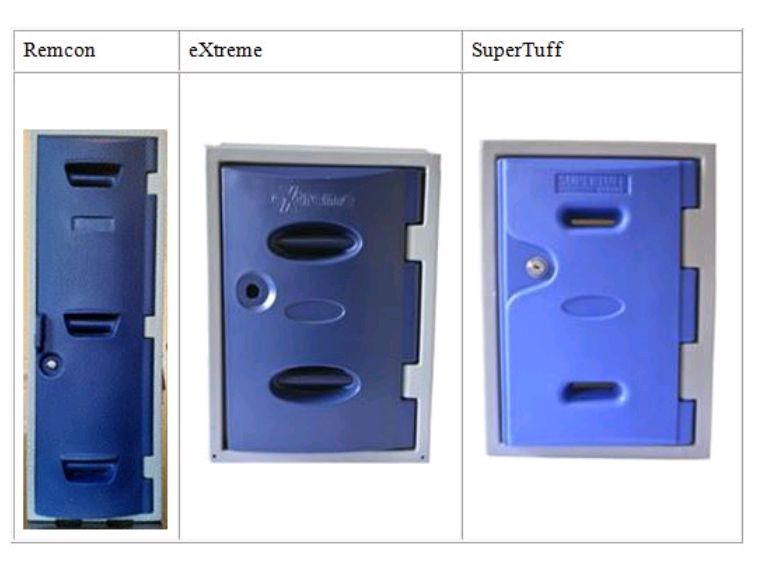 Action had been manufacturing their eXtreme lockers since 2006. In around 2013, G-force began manufacturing the SuperTuff lockers to a very similar design. G-Force raised a number of issues in their defence, including the claim that the eXtreme lockers lacked novelty due to their similarities to earlier 'Remcon' designs. The Judge included images of all three designs in an annex to his judgment, the images of the front of the lockers can be seen above:

The Judge accepted that the Claimant's design was inspired by the Remcon design. This became clear in evidence and was not meaningfully disputed by the Claimants. The Judge found that, despite the clear influence of the Remcon design on the 'eXtreme' design, the latter was nonetheless original, save in relation to the moulded hinges and the Claimant had already accepted at the start of the trial that the hinges lacked originality.

An interesting exposition of the legal test for originality in design cases is a feature of the judgment. The traditional test mirrored that for determining originality in copyright cases. The question arose as to whether the old test – that the author had expended sufficient time, labour and skill – should be replaced by the new test for copyright as set out by the CJEU – that the work should be the author's own intellectual creation. The Judge had previously considered the test unchanged for UK unregistered designs but noted that Mr Justice Arnold had since taken a different view in another case. Since it was not pertinent to the matter in hand, the question remains unresolved, at least as far as Judge Hacon is concerned.

As a linked argument, the Defendants claimed that the eXtreme design was commonplace. The judge was critical of the Defendant's arguments on this point, finding that they lacked relevant prior art for each such feature at the relevant time. The Defendants relied upon the Remcon designs to argue that the eXtreme designs were commonplace but neither they nor their expert witness were able to demonstrate why the Remcon designs should be considered commonplace and accordingly why the eXtreme lockers should also be deemed so. The Judge found that these arguments also failed.

Features of 'shape and configuration'

This led to a discussion of the revision to the statutory design right provisions in section 213(2) of the Copyright Designs and Patents Act 1988 (the "Act"), which were amended in October 2014 as follows:

The Judge held that the amendment, though unclear in purpose, would have the effect of rendering abstract designs unprotected by UK unregistered design right but he found that it did not matter in the present case because he was satisfied by the Claimant's reassurance that they sought only to protect the precise features of the eXtreme locker design. The argument the pleaded features did not amount to features of shape and configuration therefore failed.

Method or principle of construction and must fit pleading

A final effort on the part of the Defence was demonstrated in its arguments that elements of the pleaded eXtreme locker design were governed by a method or principle or construction and/or a need to look the way they did to enable them to fit together (the lockers are designed to be stacked one atop another). In either case such elements would be ineligible for UK unregistered design protection.

Judge Hacon found that, whilst the designs, and features of them, were undoubtedly functional, no elements of the pleaded design were dictated by the method of manufacture or construction. The judge did find in the Defendants' favour on one point, accepting that the top and bottom panels of the eXtreme lockers were designed as they were to enable them to better fit together. This made no difference to the majority of the pleaded aspects of the design however nor the finding that UK unregistered design right subsisted in the design as a whole.

Production of the SuperTuff design by the Defendants was primary infringement as it was effectively 'making articles to that [the eXtreme] design' contrary to section 226 of the Act.

Judge Hacon concluded his judgment with a useful recommendation for parties engaging in unregistered design right litigation in the future. Claimants should be encouraged to set out the significant features of a design or designs as they see them and the extent to which they are to be found in the defendant's accused article. Defendants may wish to respond in kind. Ideally such information should be set out in a table or chart, taking a form appropriate to the circumstances of the case. Where this approach is adopted, Judge Hacon believes it will greatly benefit the smooth running of the case.

ARTICLE TAGS
UK Intellectual Property Copyright Patent Litigation, Mediation & Arbitration Trials & Appeals & Compensation
POPULAR ARTICLES ON: Intellectual Property from UK
Due Diligence - Blood, Sweat And Tears Required?
Marks & Clerk
Over the last few months I have been following updates to the trial of Elizabeth Holmes in "The Drop Out" podcast.
Nike Enters The Metaverse
Marks & Clerk
This is a clear reflection of the intention of brand owners to monetise the metaverse via the sale of virtual goods.
New AI Consultation - UK Considering New Types Of IP Protection
Marks & Clerk
On 29 October 2021, the UK IPO launched a further consultation on IP Protection and AI.
How To Prove 'Passing Off'
Gowling WLG
'Passing off' does not have a statutory basis and doesn't need to be registered to be effective.
UK Government Launches Intellectual Property And Artificial Intelligence Consultation
Mathys & Squire
The UK Government officially launched its consultation on intellectual property (IP) and artificial intelligence (AI) on 29 October 2021, as part of the National AI Strategy (see our summary here)...
The Stormtroopers Strike Back In Attack Of The Copyright
Marks & Clerk
I was interested to read this article in the Times recently, as it is a cautionary tale of Copyright and other unregistered rights.
FREE News Alerts
Sign Up for our free News Alerts - All the latest articles on your chosen topics condensed into a free bi-weekly email.
Register For News Alerts
Article Tags
UK Intellectual Property Copyright Patent Litigation, Mediation & Arbitration
Trials & Appeals & Compensation
More Tags
Related Articles
You Don't Need To Re-Invent The Wheel - Patent Searching Can Make Your R&D Plain Sailing Marks & Clerk
New Referral To The CJEU On Article 3(c) And The Validity Of Combi-SPCs J A Kemp LLP
NFTs: Beware Of IP Rights Withers LLP
Lucky 13? Austrian Upper House Brings The Unitary Patent Closer J A Kemp LLP
How Much Are My Patents Worth? Marks & Clerk
Mondaq Webinars
Reshaping Strategies for Wealth Management in the Post-Pandemic Economy [REPLAY]
Wedlake Bell
Webinar London UK
Hot Topics in Fund Finance [REPLAY]
Cadwalader, Wickersham & Taft LLP
Webinar New York United States
More Webinars
Comparative Guides
Anti-Corruption & Bribery
Artificial Intelligence
Banking Regulation
Blockchain
Cartels
More Guides
Mondaq Advice Centres
UK
Coming to and Investing in the UK
Global
Trademarks in SAARC Countries
More MACs